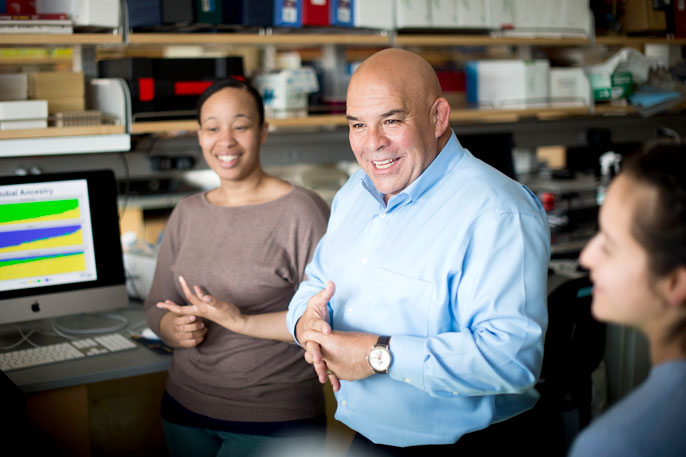 Marquitta White, M.S., Ph.D. (left) and Maria Contreras (right) join Esteban Burchard, M.D., MPH (center) in his lab. Burchard is the senior author of the largest single study of the genetic and environmental causes of asthma in African-American children, and White lead the research team that published the study.

Breakdown of prevalence by racial/ethnic population:

Results from the largest single study of the genetic and environmental causes of asthma in African-American children suggest that only a tiny fraction of known genetic risk factors for the disease apply to this population, raising concerns for clinicians and scientists working to stem the asthma epidemic among African Americans.

At the same time, the research also identified new genetic risk factors for asthma in these children, a critical first step toward improving diagnosis and treatment. Ongoing research is digging further into this data to investigate a link between these new risk factors and asthma severity and drug response, two major contributors to asthma mortality.

“Almost all the genetic studies of asthma have been done using white patients only, but you can’t assume these results will apply to other ethnic groups,” said study senior author Esteban Burchard, M.D., MPH, a professor in the UCSF Schools of Pharmacy and Medicine, director of the UCSF Asthma Collaboratory lab and a member of President Obama’s Precision Medicine Initiative. “This paper is an important first step towards truly understanding the biology of asthma in African Americans.”

More work remains to confirm whether the genetic risk factors for asthma identified in previous studies are truly absent in African Americans or merely too subtle to be detected in the current study, the authors say, but the results clearly show the biology of asthma is different black children and previously studied groups.

The research team, led by Marquitta White, M.S., Ph.D., an IRACDA-STRIDE postdoctoral fellow in the Asthma Collaboratory reported its findings online on May 3, 2016, in advance of print publication in the June 2016 issue of the journal Immunogenetics. White’s team included four female summer students in the Asthma Collaboratory — three undergraduates from UCLA, Stanford University, and SF State University, as well as a student at Lowell High School in San Francisco named Oona Risse-Adams, who was co-lead author on the new study.

“This paper shows that understanding that people are different — not better or worse, equal or unequal, but different at a genetic level — can be important and should be looked at to improve health,” said Risse-Adams, now a sophomore at Lowell.

In asthma, chronic breathing difficulties are caused by inflammation of the airways, which are thought to arise due to both environmental exposures and genetic susceptibility. Asthma is the most common chronic childhood disease in the world, and varies significantly in prevalence in different racial/ethnic populations. In the U.S., childhood asthma prevalence is highest among Puerto Ricans (18.4 percent), followed by blacks (14.6 percent), whites (8.2 percent) and Mexicans (4.8 percent). Puerto Ricans and African Americans also tend to experience more severe asthma that is harder to control with common drugs.

An increasing number of suspected asthma risk genes have come to light with the advent of genome-wide association studies (GWAS), but despite the epidemic of the disease in African-American and Puerto Rican communities, less than 5 percent of all such federally funded research of lung disease has included any racial/ethnic minorities at all, as Burchard and colleagues discuss in a December 2015 policy perspective in the journal PLoS Medicine.

White’s team analyzed data from the Asthma Collaboratory’s Study of African Americans, Asthma, Genes and Environments (SAGE), which was supported in large part by the Sandler Family Foundation. The SAGE study is the largest study of gene-environment interactions for asthma in African-American children – it includes genetic and ancestry data as well as measures of local air quality, family socioeconomic status, experience of discrimination, and obesity and other health measures in a cohort of children from around the San Francisco Bay Area.

The study led by White and Risse-Adams analyzed genetic data from 1,227 SAGE participants — 812 with asthma and 415 who served as healthy controls — to identify genetic markers associated with the onset of the disease in African Americans and to compare these markers with those already known from previous research. The team also looked for possible genetic links between asthma and obesity, which often occur together.

To the researchers’ surprise, 95 percent of known genetic risk factors for asthma from previous research could not be replicated in the SAGE cohort.

The team also identified a number of new risk factors in the African-American children of the SAGE study, including a novel variant in the PTCHD3 gene, as significant risk factors for asthma.

“The top three genes we identified as being associated with asthma were previously linked with both obesity and inflammation,” White said. “We already knew there was a strong clinical link between obesity and asthma inflammation, and this result sheds a bit more light on the biology of that relationship in these kids.”

Interestingly, she said, the way the genetics panned out, it appears that these gene variants may be separately driving obesity and asthma, rather than, for instance, driving obesity which then puts kids at higher risk of asthma. But that will require further research to understand.

Ongoing experiments being prepared by White and her summer students, all of whom have continued to work in the UCSF Asthma Collaboratory in their spare time, aim to address how the newly discovered risk factors predict differences in asthma severity within the African-American community and investigate why some respond poorly to common drugs. And the lab as a whole continues to dig deeper into the biology of asthma in minority communities using more precise whole-genome sequencing technology.

“We want to understand why some minority communities have higher rates of disease and how they may respond differently to treatment,” Burchard said. “But the risk factors we identify in these understudied populations can also point the way to new biology, which can be important for everyone.”