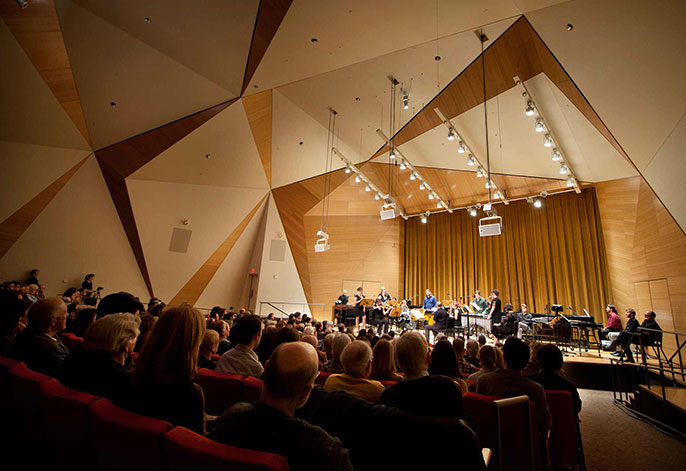 UC San Diego’s Department of Music, founded by composers over 40 years ago, spans the spectrum from classical to contemporary, including jazz, Hindustani, computer and experimental music. The Conrad Prebys Concert Hall, located in the heart of campus, is recognized as one of the greatest small concert halls in the world. The music department’s distinguished faculty have earned Pulitzer, Guggenheim, MacArthur and Grawemeyer awards. And, now, the department, under the Division of Arts and Humanities, also has key tools universities use in recruiting and retaining outstanding scholars: endowed faculty chairs.

“For more than 500 years, the world’s great universities have attracted and supported distinguished educators by endowing academic chairs,” said UC San Diego Arts and Humanities Dean Cristina Della Coletta. “What these chairs mean for the Department of Music is that we can honor outstanding faculty like Steve Schick and Rand Steiger for their past and potential contributions to UC San Diego, as well as support their current work. We thank Conrad Prebys and the Reeds for creating a lasting legacy that will benefit our music faculty for years to come.”

The UC Presidential Match for Endowed Chairs, launched in July 2014 by University of California President Janet Napolitano, initially allocates $4 million per campus to use as an incentive to encourage donors to establish endowed faculty chairs, which are so vital to UC’s efforts to attract and retain top-flight faculty. It is funded through the Presidential Endowment Fund, a source of private donations that the president may use at her discretion to support university activities. Campuses must raise at least $500,000 per chair to qualify for the match.

Steiger is known for pushing the boundaries and exploring the combination of classical instruments with digital audio processing. Throughout his diverse career, he has composed for and conducted critically acclaimed concerts and recordings with distinguished ensembles both here and abroad. His work has been commissioned and performed by numerous ensembles ranging from the American Composer’s Orchestra to the San Diego Symphony, the St. Paul Chamber Orchestra and the Los Angeles Philharmonic, where he served as a composer fellow. This year, Steiger was awarded a Guggenheim Fellowship for his “prior achievement and exceptional promise.”

“I am humbled, and extremely proud to be associated with Mr. Prebys, who has been such a generous and visionary leader in our community with his unparalleled philanthropy in support of culture, education and medicine,” said Steiger. “With the music center and concert hall that he named, he has already given us an extraordinary home that inspires us daily and allows us to share our work with the public in the most ideal of conditions. This chair will similarly inspire me to take my work in new directions, while providing crucial support for our graduate students. For all these reasons, I will be forever grateful to him.”

Schick has performed with and led numerous local and international ensembles as a soloist and director. Schick’s influence in the UC San Diego Department of Music and local community is widespread. He is founder and director of red fish blue fish, a graduate student ensemble that regularly performs, records and premieres music spanning the past 85 years of Western percussion’s history. Schick also serves as music director and conductor of the La Jolla Symphony & Chorus and was appointed the inaugural artist-in-resident with the International Contemporary Ensemble. This summer, he will direct the Ojai Music Festival, a classical four-day music festival held annually in June showcasing innovative contemporary composers.

“I am thrilled and honored to be the inaugural holder of the Reed Presidential Chair in Music,” said Schick. “The generosity of the Reeds and many others help us to make this a great university. I will do my best to use this opportunity for the betterment of our students and our mission.”

Since classes began in 1967, the UC San Diego Department of Music has remained focused on a core mission of research and innovation. The department was among the first to include computers and new technology as an essential component of a university music program. The campus soon became a West Coast counterpart to such leading centers of new music as IRCAM in Paris and Darmstadt in Germany. Research in the music department has produced innovative music software and resulted in new kinds of collaboration with neuroscientists, engineers and physicists. Graduates have gone on to prolific careers as performers, composers, educators and tech-oriented innovators in the private sector.

With the addition of the music department’s presidential chairs, the Division of Arts and Humanities has a total of 23 endowed faculty chairs that support the division’s commitment to teaching and research.