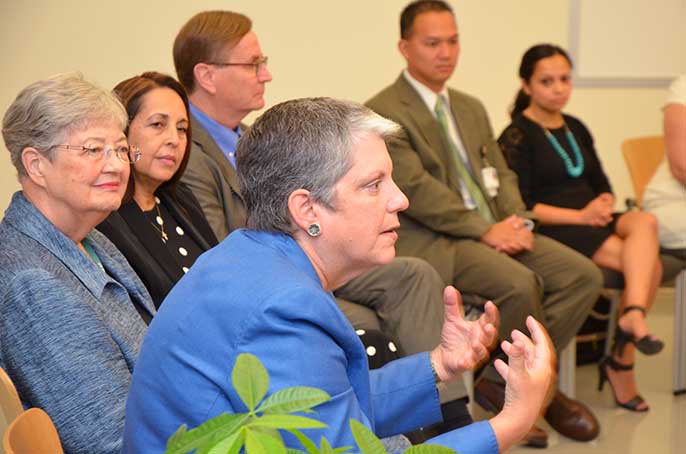 Napolitano met with 20 students from UCSF Fresno’s Doctors Academy, a challenging academic preparation program at three high schools in Fresno County. The star students, who come from educationally disadvantaged backgrounds, had questions about whether they could afford college and how they could overcome their self-doubt.

The path to become a physician is long and intense, but it’s a worthy journey that’s within reach, said Napolitano and colleagues who included UCSF Chancellor Sam Hawgood, UC Merced Chancellor Dorothy Leland and UC medical students and residents.

“Never doubt that you have what it takes to succeed as a doctor, nurse or whatever field you’re considering,” said Napolitano, who described how she overcame challenges in college, explained its affordability and encouraged students to consider applying to UC.  “You are exactly the kind of smart, motivated and compassionate students UC wants.”

Napolitano’s message resonated with Doctors Academy students such as Sunnyside High School senior Carlos Villalobos, who wants to become a physician in the valley so he can serve his community. “I feel it’s my calling,” he said.

Villalobos had been interested in attending an Ivy League college, but after listening to Napolitano, he was inspired to change his mind.

Indeed, UC trains nearly half of the medical students and residents in California. In the San Joaquin Valley, UCSF, UC Merced and UC Davis all have efforts to address health issues and the shortage of physicians practicing in the region.

The UCSF Fresno Medical Education Program was established in 1975. UCSF Fresno annually now trains approximately 290 medical residents and fellows (an increase of 100 in the past 10 years) and about 250 medical students on a rotating basis. Since its inception, the program has graduated more than 2,000 resident physicians. About 40 percent of medical residents who graduate from UCSF Fresno stay in the area to provide care for community members.

Dr. Katherine Flores, a Fresno native who was raised by her migrant farmworker grandparents and became the first in her family to attend college, founded the Doctors Academy in 1999 to open doors for students like her. All Doctors Academy graduates go on to college, with 98 percent matriculating into four-year colleges and universities. Three students from the inaugural class have received medical degrees and are in primary care residencies.

“In the Central Valley, we don’t have enough health care providers,” said Flores, who directs the UCSF Fresno Latino Center for Medical Education and Research. “We wanted to grow our own.”

The Doctors Academy students also met with San Joaquin Valley PRIME students. PRIME is an innovative training program focused on meeting the needs of California’s underserved populations, with 330 total students in six programs. UC Davis, UC Merced and UCSF Fresno collaborate on SJV PRIME, which launched in 2011 and now enrolls 27 students — all of whom have expressed interest in staying in the Valley to practice and/or work with underserved communities.

“The doubt will never go away,” she said. “Don’t be afraid to reach out to new people who will help you along the way.”

“Look for people who are positive, inspirational, who will guide you in unfamiliar terrain,” said Morales, who is interested in internal medicine and plans to apply for residency at UCSF Fresno. “You end up empowering yourself to do what you want to do.”

Along with SJV PRIME, UC Merced continues to develop health sciences research programs. It has established a Health Sciences Research Institute, offers a minor in public health and collaborates with UCSF Fresno on research into valley fever.

As part of her visit to Fresno, Napolitano met with UC Merced and UCSF campus leaders to discuss health issues in the San Joaquin Valley and how UC is addressing needs and the funding challenges associated with efforts to help improve health in the region. For example, the Doctors Academy used to receive nearly $1 million a year in federal grant funding, but that has stopped. Also, state funding only covers about one-third of all PRIME slots.

In the meantime, the San Joaquin Valley has just 45 primary care physicians per 100,000 people, while the recommended level is 60 to 80.

UCSF Fresno medical resident Andres Anaya encouraged Doctors Academy students to join him in addressing that shortage. Anaya was born the eldest son of Mexican immigrants, both of whom are deaf. His first language was American Sign Language. At the age of 5, he began translating for his family. His college guidance counselor told him college wasn’t for everyone. Later in life, he suffered an industrial accident, which landed him in the emergency department and left him temporarily paralyzed.

“It changed my perception,” Anaya said. “Everything became possible.”

Anaya graduated from UCSF medical school and now is a physician in Fresno.

“Every day I get to do something I love,” Anaya said. “I’m literally living the dream. I’m home.”