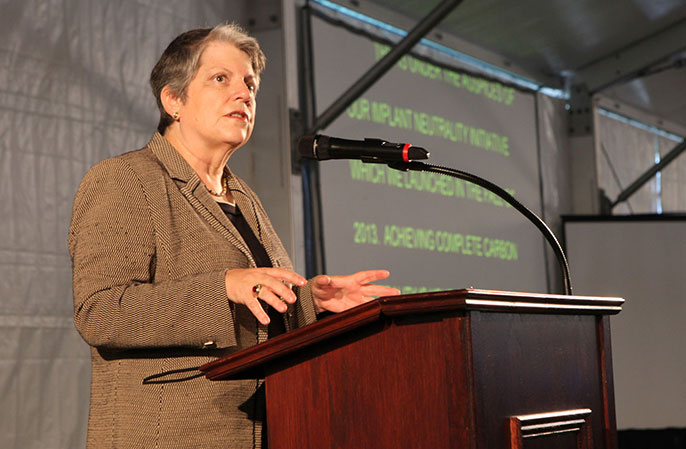 Protecting the planet for future generations is a “moral imperative” for colleges and universities, UC President Janet Napolitano said in a keynote address Tuesday (July 21) at the California Higher Education Sustainability Conference.

“This is our responsibility as members of the higher education community, as Californians and as citizens of the world,” Napolitano said at the gathering of sustainability officers, researchers and educators from public and private colleges and universities. “It’s a moral imperative.”

UC is doing its part by embarking on a Carbon Neutrality Initiative. Launched by Napolitano in 2013, it commits the University of California system to reduce its net greenhouse gas emissions from operations to zero by 2025.

“Our goal is for UC to become a model for other institutions, and to help the state of California attain its own ambitious climate change goals,” Napolitano said at the conference, hosted by San Francisco State University.

Some of the major actions UC has taken since launching the Carbon Neutrality Initiative include:

Carbon neutrality had been a long-term goal of UC’s sustainable practices policy, but Napolitano further galvanized efforts across the system by setting a 2025 deadline.

Through the Carbon Neutrality Initiative, faculty, students and staff are working collaboratively across the entire university system on research projects, operational changes and more to achieve the goal.

That effort includes 37 student fellows who have received grants to engage in research and campus outreach geared toward reducing greenhouse gas emissions.

In her keynote speech, Napolitano said the student fellows exemplify what the Carbon Neutrality Initiative is all about.

She described the work of UC Berkeley doctoral student Stella Cousins, who is studying dead trees in the coniferous forests of the Sierra Nevada, and how those trees affect carbon emissions.

“Stella’s research focuses on California, but her interest in tree mortality in the Sierra is rooted in broader concerns about the global environment,” Napolitano said.

Students have long been active in sustainability issues at UC and worked with the university to adopt its sustainability policy. They will also play a key role helping UC achieve carbon neutrality, Napolitano said.

“The student fellows are just the most recent standard-bearers in the broad and enduring tradition of UC student leadership on sustainability,” she said.