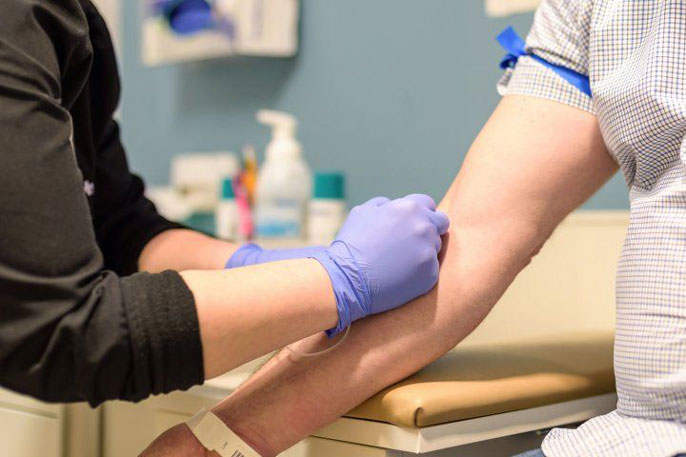 A simple blood test may soon be able to diagnose patients with two common forms of dementia – Alzheimer’s disease and frontotemporal dementia (FTD) – and tell the two apart.

Researchers at UC San Francisco analyzed the blood test in more than 300 patients and say they hope to see such a test available in doctor’s offices within five years.

“This test could eventually be deployed in a primary care setting for people with memory concerns to identify who should be referred to specialized centers to participate in clinical trials or to be treated with new Alzheimer’s therapies, once they are approved,” said Adam Boxer, M.D., Ph.D., neurologist at the UCSF Memory and Aging Center and senior author of the study published in Nature Medicine. Boxer also is affiliated with the UCSF Weill Institute for Neurosciences.

No blood test currently exists for either condition. Alzheimer’s diagnoses can only be confirmed by a PET scan of the brain, which can be costly, or an invasive lumbar puncture to test cerebrospinal fluid.

If approved, the new blood test could ease screening and help increase the number of patients eligible for clinical trials, which are essential to the search for drugs to stop or slow dementia. Patients who know whether they have Alzheimer’s or FTD are also better able to manage their symptoms, which may differ between the two conditions.

In the new study, researchers took blood samples from 362 people aged 58 to 70. These included 56 people who had been diagnosed with Alzheimer’s, 190 diagnosed with FTD, 47 with mild cognitive impairment and 69 healthy controls.

Researchers checked the blood samples for proteins that could serve as tell-tale signs of dementia. One protein, called pTau181, is known to aggregate in tangles in the brains of patients with Alzheimer’s. Blood levels of pTau181 were roughly 3.5-times higher in people with Alzheimer’s compared to their healthy peers. People with FTD had normal levels of pTau181 and those with mild cognitive impairment due to underlying Alzheimer’s had an intermediate increase.

When researchers followed the patients for two years, they found that higher levels of pTau181 predicted more rapid cognitive decline in those with Alzheimer’s or mild cognitive impairment.

A second protein, known as neurofilament light chain (NfL), was found to be elevated in the blood of patients with FTD compared to other groups. NfL normally provides structural support inside neurons but can leak out into the blood when neurons suffer damage.

Another protein, amyloid, also accumulates in the brain of patients with Alzheimer’s and is the basis for PET scan screening. But the researchers found that amyloid levels in the blood were a less accurate indicator of dementia than levels of pTau181.

The researchers say the new blood test has similar accuracy as current PET scans and lumbar punctures in distinguishing Alzheimer’s from FTD, but would be cheaper and easier. Lumbar punctures can test for both amyloid and tau in the cerebrospinal fluid.

Alzheimer’s disease affects 5.8 million Americans and makes up about two-thirds of dementia cases. FTD includes a broad group of brain disorders often associated with degeneration of the frontal and temporal lobes of the brain. FTD affects fewer people, but often begins earlier, and is the most common form of dementia in people under the age of 60.