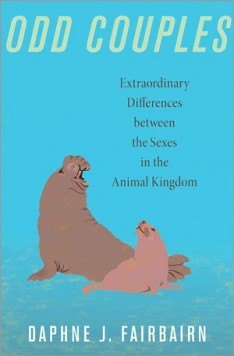 What does it mean to be male or female in the animal kingdom?

How do our own gender differences compare with those of other animals?  Why do adult male elephant seals weigh more than four times as much as an adult female?  And why are male octopuses 40,000 times lighter than females?

Evolutionary biologist Daphne Fairbairn at the University of California, Riverside examines these and other striking cases of extreme differences between males and females of the same species in her new book “Odd Couples: Extraordinary Differences between the Sexes in the Animal Kingdom” (Princeton University Press, 2013), and introduces readers to important discoveries in animal behavior and evolution.

In the book, she describes how male great bustards aggressively compete to display their plumage and large physiques to watching, choosey females. She investigates why female elephant seals voluntarily live in harems where they are harassed constantly by eager males. And she reveals why dwarf male giant seadevils parasitically fuse to their giant female partners for life. Fairbairn also considers humans and explains that although we are keenly aware of our own sexual differences, they are unexceptional within the vast animal world.

Written in a conversational style meant to engage general readers, the book describes and compares the lives of males and females in eight species from birth to death to illustrate the far reaching effects of specialization for male and female roles in different ecological settings.

“In 2007 I co-edited a book that brought together the latest studies of sexual differences in body size in mammals, birds, reptiles, amphibians, insects and spiders,” said Fairbairn, a professor of biology.  “In researching for that book, I came across many examples of truly extraordinary differences between the sexes in other, much less well-known animal groups including octopuses, barnacles, marine tubeworms and a diversity of ray-finned fishes. That prompted me to ask what kinds of sexual differences predominate across the entire animal kingdom, and why.”

Daphne Fairbairn[/caption]Fairbairn spent three years mining the available literature describing animals in every known animal phylum and each of its constituent taxonomic classes. Of these, she discovered that 73 classes within 26 phyla contain species that have separate sexes. The resulting data enabled her to estimate the prevalence and magnitude of different types of sexual differences across all living animal species.

“This is the first such comprehensive survey of sexual differences ever undertaken and provides new data for other researchers to use,” she said.  “The full survey is available to all in an open access data archive.”

During her research career as an ecologist and an evolutionary biologist, Fairbairn has continually been struck by how different life is for male and female animals, including ourselves. Even in species where males and females may seem very similar (for example, many rodents, bats, bugs and flies), a closer look reveals that their behaviors and life histories can be quite disparate.

“For example, males and females often spend most of their time in different places, use their environment differently, and mature and die at different ages,” Fairbairn said. “I have spent several decades trying to understand why this is so by detailed studies of the adaptive significance and genetic underpinnings of sexual differences in a few, select species.  However, I recognized that our sample of closely-studied species, including humans, is not necessarily representative of the animal kingdom as a whole.”

For “Odd Couples,” Fairbairn read all the information available on the ecology, life history, behavior and morphology of the eight species she chose to describe.

“Each of my example species displays an extraordinary degree of sexual disparity in morphology, and each has been sufficiently well-studied that I could tell the life stories of each sex and make quantitative comparisons between the sexes,” she said.  “These animal stories are the heart of the book and are written in the form of life history narratives, accessible to general readers as well as specialists.

According to Fairbairn, our understanding of the division of reproductive roles, the types of mating behaviors and the patterns of sexual differences in morphological, ecological and behavioral traits is strongly skewed toward animals in which males are the larger and more flamboyant sex, a pattern that is in fact quite uncommon among animals in general.

“A more comprehensive view of sexual differences broadens our perspectives and leads to new insights into why having two sexes works so well for animals and why males and females generally differ in so many ways beyond their differences in reproductive organs,” she said.

Some discoveries that surprised her while researching the book are: Differences in body size and shape are by far the most commonly reported differences between males and females, aside from differences in reproductive organs; it is far more common for females to be the larger and more flamboyant sex than the reverse (birds and mammals are among the few exceptions to this general rule); the most extreme sexual differences by far occur in species where females are giants relative to their mates; and some of the most extreme sexual differences occur in species that lack sex chromosomes entirely.

Fairbairn is a member of the Graduate Program in Evolution, Ecology and Organismal Biology at UC Riverside. She is a fellow of the American Association for the Advancement of Science and editor-in-chief of the journal Evolution.  She is co-editor of two previous books and author or co-author of more than 90 scientific research articles and book chapters.