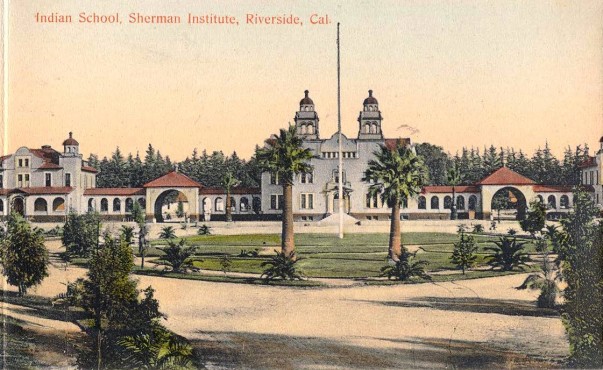 Taken from their homes and placed in boarding schools hundreds of miles away, Native American children labored in settings designed to strip them of their culture, convert them to Christianity, and assimilate them into mainstream, 20th century America.

At Sherman Institute in Riverside, Calif. — the flagship among 25 federal off-reservation American Indian boarding schools — students who could no longer speak their native languages became alienated from their communities. Others, however, assumed leadership positions when they returned home and helped their tribes bridge the gap between Native American and mainstream American societies.

“The Indian School on Magnolia Avenue: Voices and Images from Sherman Institute,” written and edited by historians connected to the University of California, Riverside, recalls those experiences through the voices of Sherman students and photographs from the school’s extensive archives. Published this month by Oregon State University Press, the book is the first collection of writings and images about an off-reservation Indian boarding school.

“We want people to understand about the attempted assimilation of American Indian children by taking them out of their homes and putting them in boarding schools,” explained Clifford E. Trafzer, co-editor of the book and the Rupert Costo Chair in American Indian Affairs at UC Riverside. “In spite of that, many children used their education and experiences — sometimes positive, sometimes bitter — to help their tribes understand U.S. government, business and culture.”

The book’s approach differs from that of much scholarship about Native Americans in that it embraces oral histories of the students who attended Sherman instead of relying only on written documents, Trafzer added.  “It reflects a belief that American Indians have something of value to tell you about their history, that there is value in listening and learning from Indians. That is not a common approach.”

For much of its history Sherman enrolled children as young as 10, until 1970 when it became a fully accredited high school. Today, Sherman Indian High School is controlled by Native Americans with a curriculum that includes American Indian history, languages and cultures.

Sherman Institute enrolled its first students on Sept. 9, 1902, a decade after its predecessor, the Perris Indian School, was founded in an agricultural region south of Riverside. Harwood Hall, Sherman’s first superintendent, lobbied to move the school from rural Perris to the larger community of Riverside, where entrepreneur Frank Miller wanted Indian students to work at his Glenwood Inn, later renamed the Mission Inn.

Tourists would ride the trolley from the inn to the Magnolia Avenue school, “visit the Indians, then go next door to the zoo,” Trafzer said.

“Miller wanted to be associated with Indian students so they could work at the inn and be a part of his pseudo-mission — just like in Old California,” Trafzer and co-author Lelelua Loupe wrote in the first chapter of “The Indian School on Magnolia Avenue.” “Once Miller and Hall accomplished their goal, the two men set about to exploit the school as a local tourist attraction and source of cheap labor.”

The book was written by Trafzer, UCR alumni and current Ph.D. students in American or Native American history, and Lorene Sisquoc, curator of the Sherman Indian Museum, where UCR graduate students have spent countless hours conducting research in the archives. Sisquoc also is a UCR master’s degree site supervisor.

Over the years, UC Riverside graduate students have uncovered hidden treasures that tell the stories of students and staff at the boarding school, Sisquoc said, and they “appreciate the archives and the stories waiting here to be told. The book gives voice to the students and people who were here, and to the history here.”

Sisquoc, a Cahuilla/Apache whose grandmother taught at Sherman in the 1950s, said she has been waiting for a book like “The Indian School on Magnolia Avenue” for a long time. “This is beneficial to the museum and to the public to get the history of boarding schools out there, and how they have affected our people.”

“Without Lorene Sisquoc, this book wouldn’t have happened,” Trafzer said, adding that the relationship between public history graduate students at UCR and the Sherman museum began in the 1990s when Ph.D. candidate Jean Keller volunteered as a museum intern.

Keller’s dissertation and resulting book, “Empty Beds: Indian Student Health at Sherman Institute, 1902-1922,” were the first written about Sherman Institute. Her research on the Sherman nursing program and the impact of public health education on Sherman students is the subject of one chapter in the book.

Other chapters focus on the role that Mission-style architecture played in the life of the school and its students, Sherman students as patriotic Indians, vocational training and the “outing” work program, the Special Navajo Five Year Program, the school cemetery, and the extensive photographic record in the Sherman vault that numbers more than 10,000 images.

In the concluding chapter, co-editor Matthew Sakiestewa Gilbert recalled his internship at the museum while a UCR graduate student and his discovery of documents relating to the experiences of his grandfather and his sister. His research led him back to the Hopi reservation and conversations with elders who attended Sherman in the 1920s, resulting in a dissertation, a book — “Education Beyond the Mesas: Hopi Students at Sherman Institute, 1902-1929” — and a PBS documentary on the Hopi boarding school experience, “Beyond the Mesas.”

“The vault is not finished sharing the voices of those students who left their families and homes to attend Sherman,” he wrote. “Their stories of assimilation, resistance, and accommodation still remain in the Museum. They wait for the next wave of researchers to release their voices so others might hear.”

Grants from the Rupert Costo Endowment at UC Riverside and the UCR Academic Senate funded some research expenses associated with the book. “The Indian School on Magnolia Avenue” is part of First Peoples: New Directions in Indigenous Studies, a Mellon Foundation-funded initiative that supports Oregon State University Press’s publication of Native American scholarly titles with a special focus on collaborative and community-based research. Proceeds from the sale of the book will go to the Sherman Indian Museum.

“The Indian School on Magnolia Avenue” was co-edited by Trafzer, Sisquoc and Gilbert, an assistant professor of American Indian studies and history at the University of Illinois at Urbana-Champaign (M.A. and Ph.D., UCR).