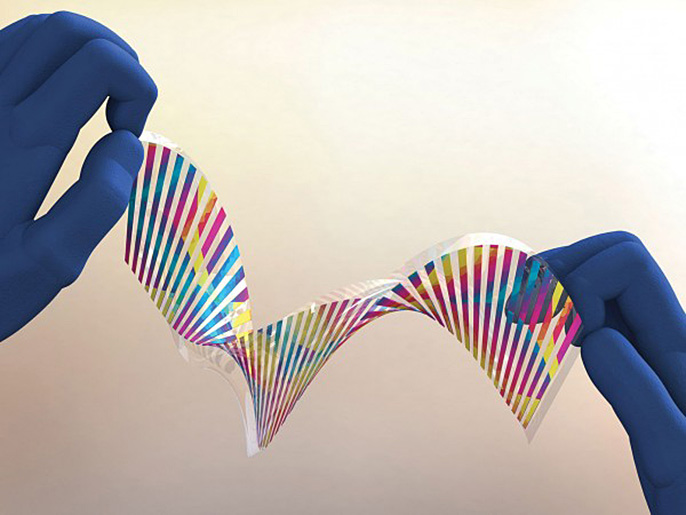 Taking inspiration from nature, UC Berkeley engineers have created an ultra-thin film that can shift colors as easily as a chameleon’s skin when pulled or twisted.

The thin-skinned material could be developed into active camouflage on vehicle exteriors, or a new class of display technologies. It could also be used as an early warning system for structural fatigue by changing color when critical components on bridges, buildings or the wings of airplanes are stressed.

The research team, led by Connie Chang-Hasnain, professor of electrical engineering and computer sciences, described their material in a study published this week in the journal Optica.

Instead of using chemical dyes or pigments to absorb and reflect light, the engineers manipulated the structure of the material, in this case a film of silicon about a thousand times thinner than a human hair, to do the job. Rows of tiny ridges — each smaller than a wavelength of light — etched onto the film would reflect light at different wavelengths, depending upon how far about the ridges are spaced.

It was only earlier this week that scientists at the University of Geneva revealed how chameleons change colors. The color-shifting lizard changes the spacing of nanocrystals just under its skin.

“We were fascinated by the chameleon’s ability to change colors, and the process of mimicking their skin has been exciting,” said Chang-Hasnain. “The coolest thing is that you can hold the sample film and stretch it to see the colorful effect.”