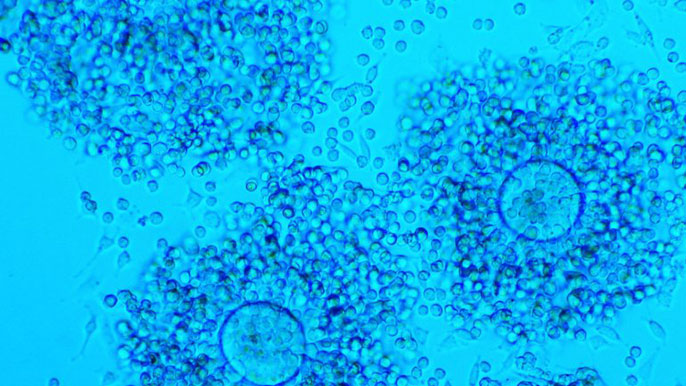 Experts in in-vitro fertilization (IVF) from UC San Francisco have discovered a pattern of protein secretion during egg maturation that they say has the possibility of leading to a new, non-invasive test to evaluate the fitness of eggs before they are fertilized in the clinic.

In studies of mouse and human eggs, Hakan Cakmak, MD, an assistant professor with the Department of Obstetrics, Gynecology and Reproductive Sciences and the Center for Reproductive Sciences at UCSF and a team of investigators from the same department and center, led by Marco Conti, MD, a professor and the director of the center, have discovered a previously unrecognized pattern of protein secretion by a woman’s eggs that normally occurs during their maturation. This secretion plays a vital role in communication between the egg and its supporting cells during the final phase of development, around the time of ovulation, according to the researchers. Their new study was published online on Feb. 8 in the Proceedings of the National Academy of Sciences (PNAS).

The UCSF researchers next intend to measure secretion of some of these proteins by the egg during IVF, so that they can later determine whether, as they suspect, at least some percentage of eggs that are used in procedures that do not result in successful pregnancies turn out to have had abnormal patterns of protein secretion.

If that is the case, a test based on sampling fluid surrounding the egg could be used to better gauge egg fitness much earlier in the IVF process, without risking harm to the embryo with invasive testing, according to Cakmak. “Next steps involve seeing whether the protein secretion patterns we have observed are predictive of IVF pregnancy outcome,” he said.

In what has become a standard procedure at IVF clinics, five to six days after fertilization embryologists perform a needle biopsy to remove several of the cells in the embryo and check them for chromosome abnormalities, almost all of which can be attributed to faulty egg maturation prior to fertilization, Cakmak said. This embryo biopsy procedure is not entirely without risk to the embryo.

The UCSF researchers used advanced lab techniques to assess secreted proteins that guide the final stages of egg maturation, a process which involves completion of a type of cell division, called meiosis, that in sexually reproducing animals only occurs in eggs and sperm and which results in an egg that is “haploid,” meaning that it contains only one copy of each chromosome instead of the pairs of chromosomes found in other, “diploid” cell types. If all goes well, normal chromosome pairs are again formed after sperm and egg join forces through fertilization.

The signaling needed for the completion of meiosis is a kind of chemical conversation between the egg — called an oocyte — and cells that surround it, called cumulus cells. They are obtained together as an intact unit when eggs are harvested for IVF following hormonal stimulation.

“Oocyte fitness to support embryo development and pregnancy is dependent on an elaborate crosstalk with the surrounding environment,” Cakmak said. “Most defects in oocyte development occur during this time, and they are more likely to occur in older women.”

In mice and humans, the researchers tracked changes in oocyte secretion through the final stage of oocyte maturation — triggered by a burst of luteinizing hormone from the brain’s pituitary gland — before fertilization.

Conti’s team measured translation of messenger RNA, a step following gene activation that results in protein production, and found that translation of 125 messenger RNAs encoding secretory proteins changed in the oocyte from the time of the luteinizing hormone burst through fertilization.

The researchers also were able to detect a secretory spurt not previously observed by others during the final stage of meiosis and oocyte maturation. It had been known that the oocyte stops activating genes to make RNA, a process called transcription, during the last stages of maturation. But by probing oocytes’ protein-making machinery Conti’s team found that these late-stage oocytes still ramp up production of some proteins by using pre-existing RNA. The interaction between cumulus cells and oocytes guides this late production and secretion of protein during the oocyte’s final maturation, even while no new RNA is produced, Cakmak said.

The researchers are weighing which of the proteins that undergo dramatic changes in secretion to include in a new assay to test for normal oocyte maturation. In the PNAS study, they focused most intensely on one candidate, called interleukin-7 (IL-7).

In the mouse they found that IL-7 secretion depends on its RNA being translated into protein within the oocyte, and that this translation is controlled by cumulus cells. In a feedback loop, IL-7 directs division of cumulus cells. Working with human oocytes, they found that the amount of IL-7 measured in fluid obtained from follicles during egg extraction was related to the oocyte’s ability to fully mature.

“We can detect these proteins in tiny amounts, on the order of one-trillionth of a gram, in a tiny drop, which in the past we could not do,” Cakmak said.

Additional UCSF co-authors of the study include Marcelle Cedars, MD, professor and director of the UCSF Center for Reproductive Health; Federica Franciosi, PhD, post-doctoral researcher; and A. Musa Zamah, MD, PhD, former assistant professor in the department, and now an assistant professor at the University of Illinois. The study received major funding from the National Institutes of Health.