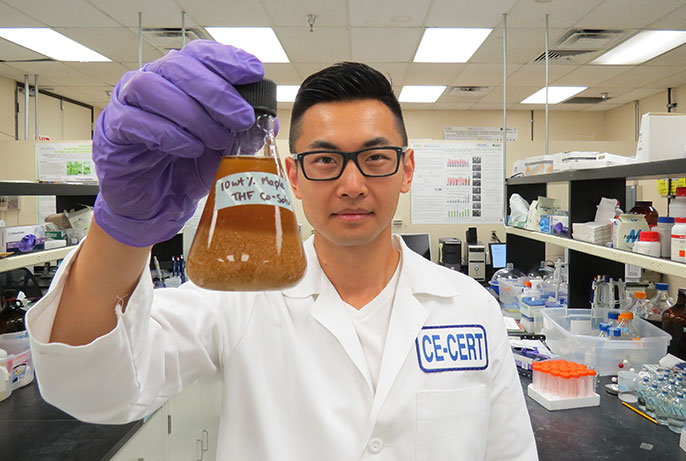 A team of researchers, led by professor Charles E. Wyman, at the University of California, Riverside’s Bourns College of Engineering have developed a versatile, relatively non-toxic, and efficient way to convert raw agricultural and forestry residues and other plant matter, known as lignocellulosic biomass, into biofuels and chemicals.

The key to the UC Riverside technology is using tetrahydrofuran (THF) as a co-solvent to aid in the breakdown of raw biomass feedstocks to produce valuable primary and secondary fuel precursors at high yields at moderate temperatures.

Those fuel precursors can then be converted into ethanol, chemicals or drop-in fuels. Drop-in fuels have similar properties to conventional gasoline, jet, and diesel fuels and can be used without significant changes to vehicles or current transportation infrastructure.

Compared with other available biomass solvents, THF is well-suited for this application because it mixes homogenously with water, has a low boiling point (66 degrees Celsius) to allow for easy recovery, and can be regenerated as an end product of the process, said Charles M. Cai, a Ph.D. student working with Wyman.

Process reduced to a single step

CELF is unique in that it can consolidate multiple processing steps — such as pretreatment, sugar hydrolysis and sugar catalysis — into one step. This reduces the water content of the reaction to maximize the amount of actual solids that can be loaded and also conserve heat and energy.

The process is also tunable so that different end products can be made by changing the configurations.

Lignocellulosic biomass, which is the only sufficiently prevalent sustainable resource for conversion into liquid transportation fuels, is the most abundant organic material on Earth. It is composed of three major components: cellulose, hemicellulose and lignin.

Using the combination of CELF with iron chloride, a type of metal halide, to break down the maple wood, Cai and the research team obtained yields of 95 percent of the theoretical maximum for and 51 percent for 5-HMF in a single pot reaction. This presents an improvement in yield rates of almost 50 percent over current commercial technologies and can thereby potentially reduce the cost of furfural production to within the range of current price of crude oil.

In addition to the high yield rates, more than 90 percent of the lignin was dissolved and extracted by CELF and recovered as a fine powdered product.

Lignin is often unused or burned. However, lignin is actually a promising resource for making additional high value chemicals and fuels once it is extracted and depolymerized with CELF. Because THF is easily recovered at low temperatures, its removal after the reaction allows the dissolved lignin particles to reform as solids that precipitate out of solution.

The recently published paper in Green Chemistry is titled “Coupling metal halides with a co-solvent to produce furfural and 5-HMF at high yields directly from lignocellulosic biomass as an integrated biofuels strategy.” In addition to Cai and Wyman, co-authors are Nikhil Nagane, a graduate student in Wyman’s lab who performed studies on reaction kinetics with CELF, and Rajeev Kumar, an assistant research engineer in Wyman’s group who advises the graduate students along with Wyman.

In previous work, outlined in a 2013 paper published in Green Chemistry, Cai introduced the use of CELF with simple acids as a method to produce sugars for biological processes such as fermentation.

In this case, the technology is being employed in ongoing project at UC Riverside to combine CELF technology with microbial production of fuels, such as ethanol and butanol, by using CELF to produce highly reactive sugar-rich materials from lignocellulosic biomass that can be easily broken down to simple sugars using zero or very low levels of added enzymes.

The drop-in fuels research was supported by a grant from the Sun Grant Initiative, the UC Riverside Research and Economic Development Office of Technology Commercialization, and the University of California Transportation Center.

The UC Riverside Office of Technology Commercialization has worked with the inventors to file a patent on the invention. CELF is licensed by partners from Cognitek in Northbrook, Ill., who will be working with Cai and Wyman to create a new spin-off company to commercialize the technology.