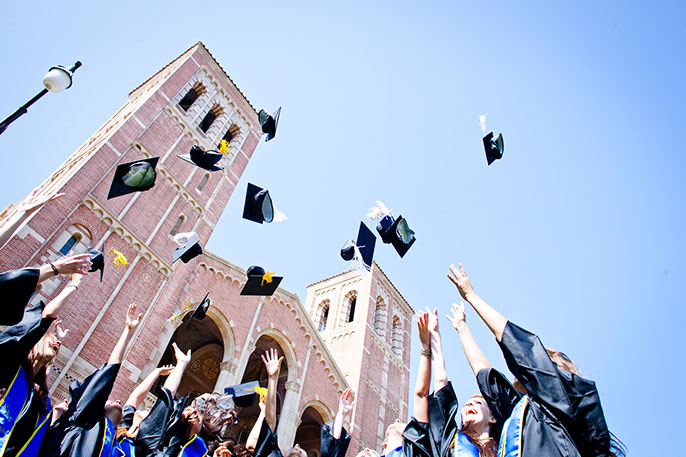 Too often, we hear that higher education fails to serve those not already born into lives of privilege. Yet thousands of UC students this spring will turn their tassels and defy that notion. They come from neighborhoods, countries and backgrounds where college-going is not the norm. And they embody quintessential UC qualities: extraordinary levels of persistence and imagination, coupled with a willingness to work hard and the courage to dream big.

Many of these newly minted grads aren’t resting on their hard-won laurels. They already are paying it forward — working to make the journey a little easier for those who follow in their path.

Here are a few who beat the odds.

Danny Murillo’s path to UC Berkeley began in solitary confinement.  Murillo spent a total of 15 years in California prisons, including six years at the notorious Pelican Bay, where he took correspondence community college courses while serving time in an isolation unit.  On campus, he founded Underground Scholars, an organization to support formerly incarcerated students. In May, Murillo graduated from UC Berkeley with a degree in ethnic studies, and a drive to reform the prison system and reduce incarceration rates.

When Honduras native Walter Mancia arrived — alone — in Los Angeles at the age of 17, he spoke no English and had no education beyond the seventh grade. He was working 12-hour days as a fruit seller to pay off the coyote who’d arranged his passage to the U.S. when he met an American couple who gave him a home while he went to school to learn English, earn a GED, attend community college and transfer to UCLA. This weekend, having conducted undergraduate research and presented his findings at a national conference, Mancia graduates with a degree in molecular and cell biology. He plans to pursue a Ph.D. in cancer biology and cell signaling at UC San Francisco.

Only 10 percent of young people in the foster care system go on to college, let alone attend one of the nation’s most respected universities. Of those who do pursue higher education, only 3 percent earn their degrees. Sociology major Andre Theus is one of those graduates and, as a peer mentor in UC Santa Barbara’s Guardian Scholars program, he has worked hard to make his success story less unique.

Tamela Adkins, emergency services manager at UC Merced, was one of the first people hired when UC's 10th campus opened its doors a decade ago, in September 2005. Last month, the 53-year-old psychology major — who had longed to pursue higher education — earned the distinction of being the first college graduate in her family and one of the oldest students to earn an undergraduate degree at Merced.

For Rene Amel Peralta, the ability to dream big required more vision and courage than most. The undocumented student, who immigrated to the U.S. as an unaccompanied minor at 13 and spent his teen years as a child laborer, had never been to school when he enrolled in a California community college at 18.  Eight years later, with an associate’s degree and an outstanding academic track record, he transferred to UC Irvine. On June 13, he graduates with a B.S. in chemistry and an ironclad ambition to help others with backgrounds similar to his own.

Cassie Nguyen has not let a struggle with brain cancer end her college ambitions. Persisting with studies through devastating physical treatments might have been enough work for most people, but Nguyen also found the time and energy to volunteer with the American Cancer Society as a patient advocate. While completing her degree in public policy, Nguyen — who is now cancer-free — also founded Spotlight on Hope, a filmmaking camp for kids with cancer.

From the time she was 5 years old, Brittney Lewis wanted to become a doctor. She wasn’t daunted by the fact that no one in her large extended family had gone to college. She wasn’t daunted when she became a parent at 19, nor when she became a single mom the following year. This spring, Lewis completed her M.D, her 8-year-old son by her side. At her graduation party, surrounded by about 100 family members, Lewis reveled in the opportunity to be a role model to dozens of younger family members, who look to her for inspiration and support.
Read more about Brittney Lewis's story.

Ethiopia native Getahun Weldeselassie completed his Doctor of Pharmacy degree worlds away from where he started his education — an impoverished student in a poor, strife-ridden city where unemployment was rampant and prospects for the future were slim. How Weldeselassie arrived where he is today took hard work and uncommon ability and resolve, combined with a dash of extraordinary luck.

At the age most students are starting college, UC Santa Cruz graduate Rolando Cruz Perez was on a path that seemed to be headed anywhere but. He credits where he is today – with a bachelor’s of science in bioengineering and plans to start the Ph.D. program in bioengineering at Stanford University the fall – with skills of leadership and persistence he gained in the military, and a family who never gave up on him.

It is not surprising that Indira Esparza, graduating with a political science degree and a minor in education, has ambitions to become a teacher. Education — UC San Diego in particular — has opened doors for her from a young age. Esparza is a graduate of the Preuss School, a high school run by the campus, aimed exclusively at first-generation college students. She now plans to earn a master’s in education at San Diego and study the effects of education on undocumented students — work that relates closely to her own story. Having come from Mexico with her parents at age 2, Esparza said, she hopes to help other undocumented and immigrant students flourish.