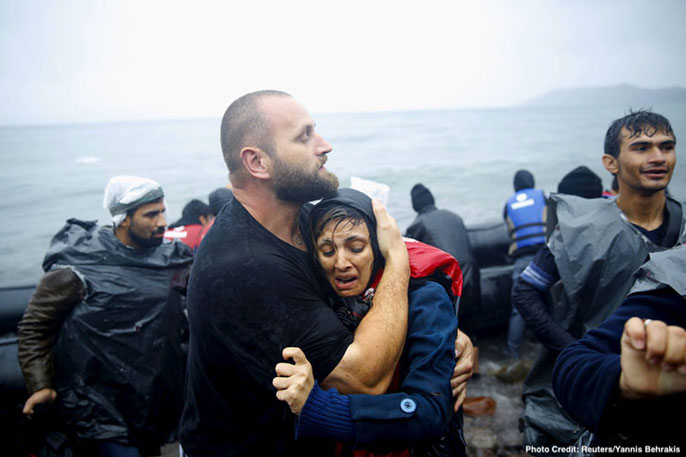 To humanize the growing refugee crisis, researchers at UC Berkeley and UC Davis have launched an interactive website that maps the perilous ordeals of thousands of displaced people from the Middle East, Africa and Asia through their own personal stories and social media posts.

The Digital Refuge website, unveiled on World Refugee Day, tracks in vivid words and imagery the odyssey of refugees who have stayed in camps in Greece en route to other parts of Europe.

Its launch is timely as debates rage over tough immigration policies that include family separation at the U.S.-Mexico border, and a travel ban on nationals from several majority Muslim countries, which the Supreme Court is expected to rule on next week.

“Heartless immigration policies, including separating families at the U.S. southern border, underscore the importance of understanding the living conditions and needs of migrants and refugees worldwide,” said project co-leader Katerina Linos, a UC Berkeley law professor and co-director of the Miller Institute for Global Challenges and the Law.

Analyzing social media data, ethnography and non-governmental organization databases, Linos and fellow faculty, staff and graduate students created the multimedia project to allow users to explore camp conditions and compare on-the-ground experiences to government reports. Their data is based on more than 6,000 interviews and 10,000 Facebook posts.

“Our hope is that Digital Refuge will help governments, aid organizations, policymakers, and the public to better understand and address refugees’ everyday issues and concerns,” Linos said.

For example, Linos notes, while refugees are in need of food, clothing and shelter, they also rely heavily on mobile technology such as smartphones, WhatsApp and Facebook to stay in touch with family and other support networks. That means they need access to Wi-Fi.

Also of great concern are sudden changes in immigration policy, such as the proposed ban on travelers from Syria, Iran, Yemen, Libya and Somalia.

“Our research shows that while governments often change policies quickly to deal with emergencies, this sows confusion and deep distrust among migrants and refugees, and turns them away from government and aid organizations, and towards smugglers and other informal information brokers,” Linos said.

According to international law, refugees are people who have fled their homelands fearing persecution, and are entitled to basic protections under international law, such as the right not to be turned back to danger. Migrants include many more groups, including people who are fleeing poverty and other adverse conditions in search of a better life.

As wars, droughts, famines and other humanitarian crises break out around the world, the line between refugees and migrants is becoming more blurred, though the legal definition of a refugee remains enshrined in the 1951 Refugee Convention.

That said, Linos predicts immigrants and refugees alike will be paying close attention to the Supreme Court decision regarding the travel ban, which is expected to be handed down Monday.

“Whichever way the decision goes, it will have a huge impact not only on people who want to visit, work, and study in the U.S., but also on Americans’ long-term trust in U.S. institutions, and on our global standing,” she said.

The Digital Refuge project is funded by a Carnegie Fellowship awarded to Linos, and by seed funding from the Center for Information Technology in the Interest of Society and the Banatao Institute (CITRIS) awarded to Linos and to UC Davis law professor Anupam Chander.

In addition to Linos and Chander, leaders of the Digital Refuge project include UC Berkeley Ph.D. students Laura Jakli and Melissa Carlson, and Patty Frontiera from UC Berkeley’s D-Lab and Stavros Spyrellis from the Centre national de la recherche scientifique.