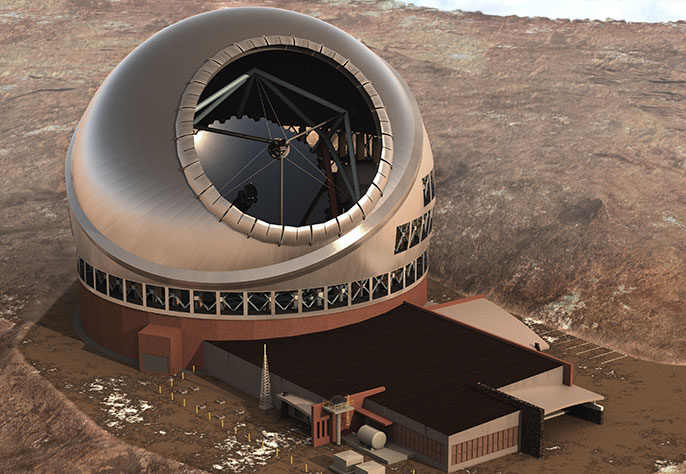 An artist's rendering of the Thirty Meter Telescope, which will be built near the summit of Mauna Kea on Hawaii Island

The Thirty Meter Telescope Project has been developed as a collaboration among Caltech, UC, the Association of Canadian Universities for Research in Astronomy (ACURA), and the national institutes of Japan, China, and India to design, develop, construct and operate a thirty-meter class telescope and observatory on Mauna Kea in Hawaii (TMT Project). Major funding has been provided by the Gordon & Betty Moore Foundation.

Following the approval of a sublease on July 25 by the Hawaii Board of Land and Natural Resources, the construction phase of the Thirty Meter Telescope (TMT) project will begin on Hawaii Island and around the world throughout the TMT international partnership. The TMT International Observatory Board of Directors, the project's new governing body, recently voted for the approval of the initial phase of construction, contingent on the approval of the sublease, with activities near the summit of Mauna Kea scheduled to start later this year.

The TMT project was initiated a decade ago by the University of California, the Association of Canadian Universities for Research in Astronomy, and the California Institute of Technology (Caltech) as the TMT Observatory Corporation. Now, as the TMT International Observatory (TIO) — founded as a limited liability company on May 6, 2014 — the project has the official green light to begin constructing a powerful next-generation telescope.

Michael Bolte, professor of astronomy and astrophysics at UC Santa Cruz and a member of the TMT International Observatory Board, said the approval of the sublease was the final step in a long process. "Combined with the incorporation in May of the company to construct and operate the TMT, we are now ready to move forward with the construction phase of the project," Bolte said.

The TMT has its roots at UC Santa Cruz through the leadership of astronomers Jerry Nelson, Joe Miller and Terry Mast, as well as Bolte. The design of the TMT builds on the amazing success of the twin Keck Telescopes at the W.M. Keck Observatory. Many of the key TMT technologies were proven in the Keck Telescopes, including the segmented-mirror design originally conceived by Nelson, who has served as project scientist for TMT. Both Miller and Bolte have served as past directors of UC Observatories, which oversees UC's participation in the TMT and is a managing partner of the Keck Observatory.

"UC — particularly the UC Observatories labs at UC Santa Cruz and UCLA — will continue to lead efforts in the design and construction of the instruments for the TMT. Having access to the TMT will ensure that UC astronomers will continue to be leaders in astronomy and astrophysics research for decades to come," Bolte said.

Kahu Ku Mauna and the Mauna Kea Management Board reviewed, and the University of Hawaii Board of Regents recently approved, the proposed TMT sublease. The final approval from the Board of Land and Natural Resources — the last step in the sublease process — allows TMT to begin onsite construction on Mauna Kea, home to many of the world's premier observatories.

"It has been an amazing journey for TMT, from idea to shovel-ready project," said Henry Yang, TMT International Observatory Board Chair and UC Santa Barbara Chancellor. "We are grateful to the Gordon and Betty Moore Foundation, the Hawaiian government, its citizens, and our project partners in bringing this important astronomical science effort to fruition. It is also my rewarding experience to work with so many community friends, University of Hawaii colleagues, and officials in both the Big Island and Oahu in this journey."

Initial construction activities in Hawaii will include grading the site in preparation for future building work, enabling a site dedication ceremony in October. TMT is committed to work within a plan for responsible development on Mauna Kea created by the Office of Mauna Kea Management.

"TMT has worked for many years to design an unprecedented telescope, but also to work with the community to incorporate respect for Mauna Kea in our stewardship," said Gary Sanders, Project Manager for TMT. "It is an honor and a privilege to now begin building our next-generation observatory in so special a place."

The TIO founding members are Caltech, the National Astronomical Observatories of the Chinese Academy of Sciences, the National Institutes of Natural Sciences in Japan and the University of California. India, an associate, is expected to become a full member later this year. Canada also is an associate and aims to join as full member in 2015.

Off-site work on the telescope has been proceeding around the world. Japan has seen to the production of over 60 mirror blanks made out of special zero-expansion glass that does not alter its shape with temperature changes. The blanks will be highly polished for use in the telescope's 30-meter-diameter primary mirror. The final design of the telescope structure itself is nearing completion, also in Japan.

Design of the fully articulated main science steering mirror system in the telescope, as well as development of the laser guide star systems and other components, is proceeding in China. The TMT adaptive optics facility is in final design in Canada. Prototyping of TMT's primary mirror assemblies and the building of mirror actuators, edge sensors, and support systems is ongoing in India. Three "first-light" instruments are also under development with major contributions from all the TMT partners.

The advancement of TMT to this stage of imminent onsite construction has been made possible by the support of the Gordon and Betty Moore Foundation. The foundation has spent $141 million to date to fund the design, development, and construction phases of TMT.

"I'd like to extend my deepest gratitude to the Gordon and Betty Moore Foundation and all of our partners and supporters," said Edward Stone, the Morrisroe Professor of Physics at Caltech and the new executive director of TIO. "We are looking forward to starting construction this year and moving ahead."