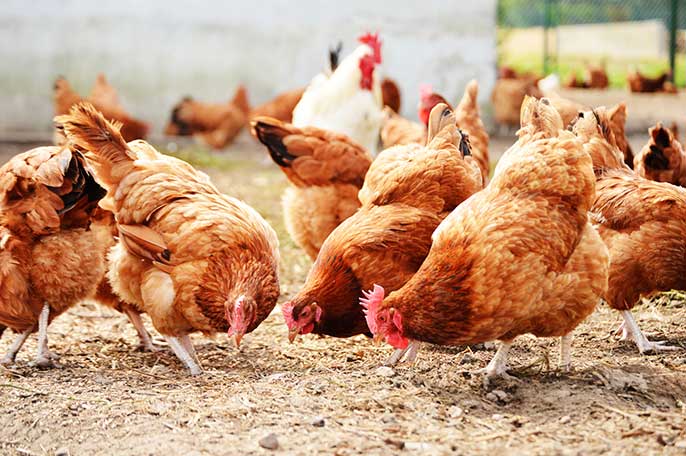 Chickens, along with other poultry and livestock, now consume 70-90 percent of all genetically engineered crops, the new UC Davis study found.

A new scientific review from the University of California, Davis, reports that the performance and health of food-producing animals consuming genetically engineered feed, first introduced 18 years ago, has been comparable to that of animals consuming non-GE feed.

The review study also found that scientific studies have detected no differences in the nutritional makeup of the meat, milk or other food products derived from animals that ate genetically engineered feed.

Titled “Prevalence and Impacts of Genetically Engineered Feedstuffs on Livestock Populations,” the review article is now available online in open-access form through the American Society of Animal Science. It will appear in print and open-access in the October issue of the Journal of Animal Science.

Food-producing animals such as cows, pigs, goats, chickens and other poultry species now consume 70 to 90 percent of all genetically engineered crops, according to the new UC Davis review. In the United States, alone, 9 billion food-producing animals are produced annually, with 95 percent of them consuming feed that contains genetically engineered ingredients.

“Studies have continually shown that the milk, meat and eggs derived from animals that have consumed GE feed are indistinguishable from the products derived from animals fed a non-GE diet,” Van Eenennaam said.  “Therefore, proposed labeling of animal products from livestock and poultry that have eaten GE feed would require supply-chain segregation and traceability, as the products themselves would not differ in any way that could be detected.”

Now that a second generation of genetically engineered crops that have been optimized for livestock feed is on the horizon, there is a pressing need to internationally harmonize the regulatory framework for these products, she said.

“To avoid international trade disruptions, it is critical that the regulatory approval process for genetically engineered products be established in countries importing these feeds at the same time that regulatory approvals are passed in the countries that are major exporters of animal feed,” Van Eenennaam said.

Collaborating on the study was co-author Amy E. Young in the UC Davis Department of Animal Science.

The review study was supported by funds from the W.K. Kellogg endowment and the California Agricultural Experiment Station of UC Davis.