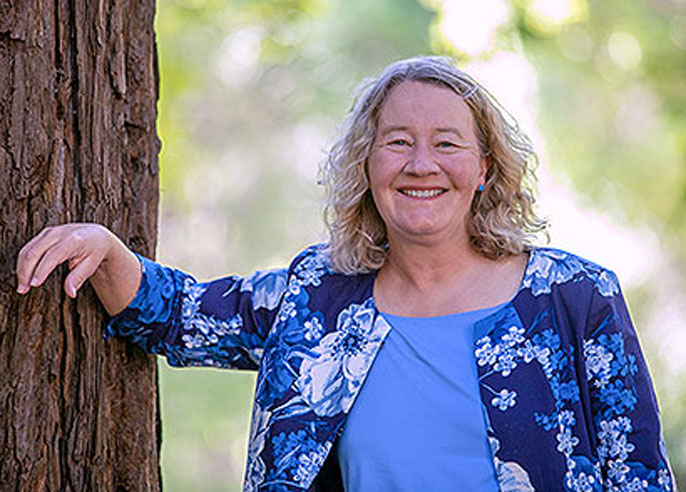 Nobel laureate Carol Greider, an eminent biologist and advocate for diversity in science, will join the faculty at UC Santa Cruz as a distinguished professor of molecular, cell, and developmental (MCD) biology. She expects to begin her new position in October 2020.

Greider is currently a Bloomberg Distinguished Professor, Daniel Nathans Professor, and department director for Molecular Biology and Genetics at Johns Hopkins University School of Medicine. She has been visiting UC Santa Cruz while on sabbatical leave since September 2019. A native Californian with deep roots in the UC system, she will be joining a department at UC Santa Cruz with strengths in areas that mesh well with her research, including RNA biology, genomics, cancer biology, and stem cell biology.

“The science here in MCD Biology is fantastic, and I’ve been impressed by the rigorous training for graduate students,” Greider said. “I also see opportunities to make a difference in terms of underserved populations and women in science, which are issues I care a lot about and which seem to be part of the bedrock here at UCSC, not just something added on top, so that structures are set up to support efforts in those areas.”

Greider shared the 2009 Nobel Prize in Physiology or Medicine for her pioneering work on telomeres, critical structures that maintain the ends of chromosomes, and the discovery of telomerase, the enzyme that maintains telomere length. Telomeres are stretches of repetitive DNA at the ends of chromosomes, often compared to the plastic tips that keep the ends of shoelaces from unraveling. Telomere shortening is associated with aging and age-related diseases.

Greider discovered telomerase as a graduate student in Elizabeth Blackburn’s laboratory at UC Berkeley. Throughout her career, she has been a leading researcher in telomerase biochemistry, telomere function, and the critical roles that telomeres serve, including maintaining genome stability, preventing cancer, and modulating senescence and aging. One of her current focus areas is studying degenerative human diseases caused by short telomeres. She will establish a new laboratory at UC Santa Cruz to continue her telomere research program.

As a member of numerous advisory boards and high-profile national commissions, Greider has helped guide programs and initiatives for major institutions and contributed to national policy reports on issues ranging from sexual harassment to biomedical research ethics. She served on a working group for the director of the National Institutes of Health on “Changing Culture to End Sexual Harassment,” which issued its report in January. She is the first author with other scientific leaders of a high-visibility 2019 policy paper in the journal Science on “Increasing Gender Diversity in the STEM Research Workforce.”

“Carol is a very highly accomplished and respected scientist and advocate for women and minorities in science,” said Susan Strome, distinguished professor and chair of MCD biology at UC Santa Cruz. “She is also an energetic, down-to-earth person and a wonderful colleague. We are lucky to have her join us.”

In addition to the Nobel Prize, which she shared with Elizabeth Blackburn and Jack Szostak, Greider was awarded the 2006 Albert Lasker Award for Basic Medical Research and has been elected to the National Academy of Sciences, American Academy of Arts and Sciences, and American Association for the Advancement of Science. She earned her B.A. in biology from the College of Creative Studies at UC Santa Barbara and her Ph.D. in molecular biology at UC Berkeley.

When asked why she wants to move from Johns Hopkins to UC Santa Cruz, Greider said, “The science at UCSC is fabulous. Change is good for creativity, and I want to be in a different environment with good colleagues to talk to.”

Greider added that she enjoys living in Santa Cruz and has found it to be a very welcoming community. An avid swimmer, she began swimming in the ocean with her masters swimming group after the pools were closed due to COVID-19. “I was even on the front page of the Sentinel — I think my swim cap caught the attention of the photographer,” she said. “People have asked me if I’m going to learn to surf, and I said it’s not at the top of my list. But now that I’ll be staying here, I think I’m going to try it.”