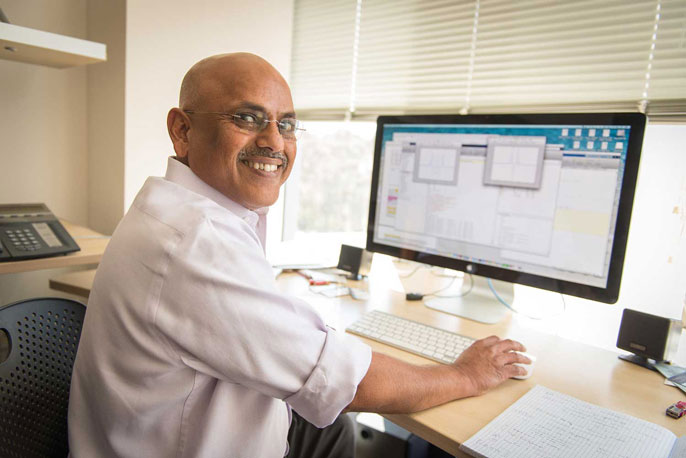 Hari Garudadri, co-creator of the “Build Your Own Internet of Things" course.

More than 30,000 people from around the world have expanded the so-called Internet of Things (IoT) through a Coursera course taught by a team of researchers from the University of California, San Diego Qualcomm Institute.

The six-part course, titled “Build Your Own Internet of Things,” is part of Coursera’s new IoT specialization, one of the first such specializations the online education company has rolled out over the past year. The on-demand massive open online course (MOOC) was designed to appeal to not only students of electrical and computer engineering, but also entrepreneurs, innovators and members of the DIY community who seek to develop skills in embedded systems with a focus on data sensing, actuation, processing and communication. So far, it has drawn the interest of 30,815 active users across the six courses, with 1,700 paying to receive a certification for the course.

Through videos, quiz modules and a combination of theory and practice, students in the course first learn how science and technology have developed to enable the Internet of Things. Then they capitalize on that knowledge with hands-on development by using the Qualcomm® Snapdragon™ platform to transform a 96Boards compliant DragonBoard™ 410c single board computer into a pseudo-smartphone that can sense, actuate, implement VoIP calls and demonstrate a simple media player application. Nearly 2,000 students have completed the first module.

In the sixth and final “Capstone” class, the students will once again use the boards to build their own mobile surveillance systems with at least two sensors, at least one communication protocol and at least one actuator.

The instructors say that since the initial release of this specialization, the 96Boards ecosystem and community have evolved substantially. The community made available a number of “Mezzanine cards” that serve as add-ons to the DragonBoard and extend the functionality of the board. 96Boards has also launched a weekly, open, live video forum called “OpenHours.” Participants can join OpenHours on a weekly basis, meet and hangout with other Coursera students, as well as core community members and open source developers.

Although the class proved to be very popular (particularly with students from Asian countries, who made up 41 percent of the class) the students’ wide-range of experience proved to be a challenge for course creators Hari Garudadri, an associate research scientist at Qualcomm Institute (QI), and Ganz Chockalingam, a principal design engineer.

“We were surprised to learn that more than 70 percent of the students were already in the workforce and had a college degree,” said Garudadri. “They are taking this course to upgrade their skills and find new meaning in their jobs. When we created the course we were targeting students with very little experience, but the students that actually took the course turned out to be a lot more seasoned. Some might know one aspect of programming the DragonBoards, like sensing and actuation, but maybe not communication and multimedia applications. When we update the courses we will be taking that into account.”

“This was one of the first specializations on Coursera which was lab-based and required the students purchase specific hardware to get the most out of the course,” noted Chockalingam. “Since there were no prior acts to follow, we had to make the best guess on how to best structure the course to make the labs easy to follow.”

Garudadri and Chockalingam say they have heard from a number of satisfied students, including a retired engineer in India taking the course to “keep fresh,” an IT professional in Jamaica who called it “a great and fun course,” and Haolin (Tony) Zhong, a freshman at Northfield Mount Hermon High School in Massachusetts, who wrote to say he “learned a lot about telephony, wireless communication and internet of things.”

Garudadri said it was important to him and Chockalingam to give the students as much creative leeway as possible when creating their devices. “IoT is not one specific thing, it’s an emerging platform that is whatever you make it out to be,” said Garudadri. “We wanted to give them the tools that can be used — sensing, communication and multimedia were three examples of that — but throughout the course we had them come up with ideas about what the internet could or should be.”