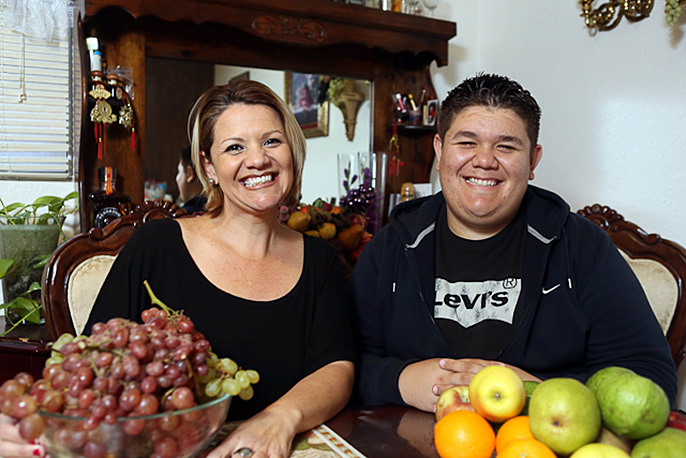 Veronica Romero has struggled to let go of the feeling that she was somehow responsible for her son Anthony's weight problems. She has since lost 150 pounds after undergoing gastric-bypass surgery at UCLA; Anthony is losing weight after enrolling in UCLA's Fit clinic.

Veronica Romero was 21 years old and worried. Pregnant with her first child, she was putting on a lot of weight. Her obstetrician leveled with her: “You’re gaining too much.” But as she approached 50 pounds of weight gain near the end of her pregnancy, Romero felt helpless.

“I tried to watch what I was eating, but it was so hard. Pregnant women get cravings, and my cravings were sugary,” she recalled.

“I tried to eat carrots and small appetizers, but it didn’t work. I was disappointed. I didn’t want to get bigger.” The pregnancy set into motion a health crisis on two fronts: for Romero, now 38, and her son, Anthony, now 17. Romero eventually grew to nearly 300 pounds, and Anthony became a big baby, then a chubby toddler and now an obese adolescent.

This mother-child pair is not unique. The obesity tsunami that has washed across the United States over the past four decades has swept up pregnant women and their offspring too. In fact, pregnant women today are considered by some medical authorities to be at the nexus of the obesity crisis. Abundant research has revealed that pregnancy is a key period of increased risk for developing obesity in women and that obesity in pregnancy may genetically “program” offspring to become overweight or obese later in life.

The concept, commonly known as fetal programming, is rapidly altering the fields of obstetrics and pediatrics, said Dr. Sherin Devaskar, Mattel Executive Endowed Chair of the Department of Pediatrics, physician-in-chief of Mattel Children’s Hospital UCLA and assistant vice chancellor of children’s health. “There have been many studies to prove beyond a doubt that fetal programming is real. If a mother is obese, her babies are at very high risk for obesity and chronic disease.”

Read the complete story at U Magazine