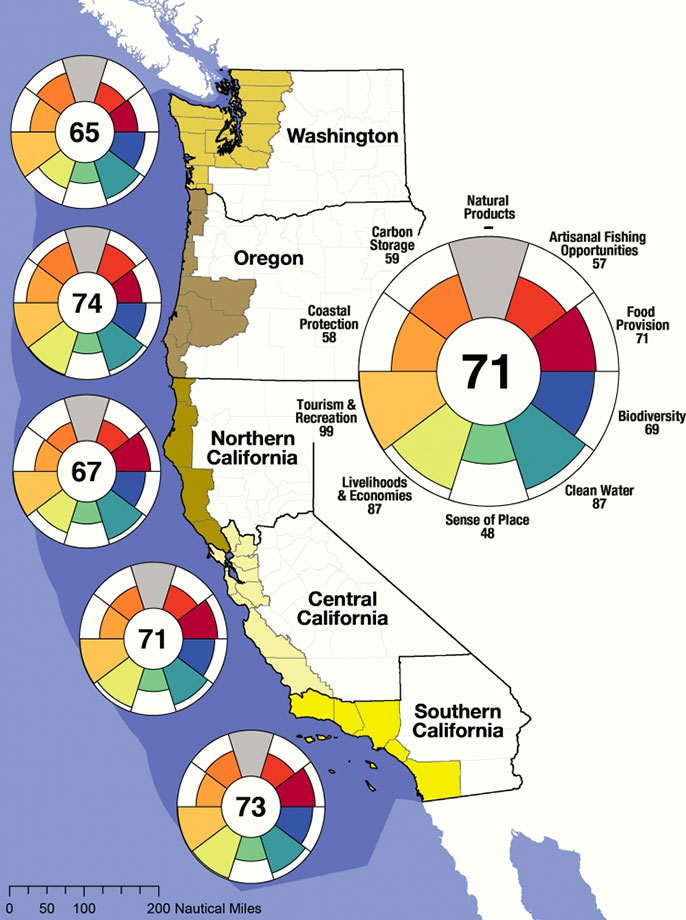 The first regional assessment by the Ocean Health Index on American waters — Southern, Central and Northern California, Oregon and Washington — showed that habitat destruction, particularly the loss of salt marshes and sand dunes, over the last several decades negatively impacted carbon storage and coastal protection, two of the 10 goals measured. Led by scientists from UC Santa Barbara’s National Center for Ecological Analysis and Synthesis (NCEAS) and Conservation International, the findings are published today in the online journal PLOS ONE.

The Ocean Health Index assesses ocean conditions in terms of how well the coastal waters deliver a range of benefits to people both now and in the future. The overall score for the West Coast was 71 out of 100. “A score of 71 tells us that, as a whole, the West Coast is doing a lot of things well in terms of the human impact and the benefits we derive from the ocean,” said the study’s principal investigator, Ben Halpern, professor at UCSB’s Bren School of Environmental Science & Management and NCEAS associate.

The Ocean Health Index is comprised of 10 goals, such as food provision, coastal protection, biodiversity and clean waters, which are scored from 0 to 100. A score of 100 represents a specific target for each goal that is determined to be both attainable and sustainable.

According to Halpern, there is room for improvement on several of the goals in the regional assessment. “The goal scores on the coastal and regional level for carbon storage and coastal protection are driven by the loss of key natural habitats and leave us vulnerable to serious problems in the future,” he said. Natural habitats are key to nearly all aspects of ocean health.

Carbon storage assesses the ability of coastal vegetation to take up carbon dioxide from the atmosphere and store it for long periods of time — decades to centuries — if undisturbed.  Salt marshes and seagrasses perform that function along the West Coast. Oregon scored the highest of the five regions for this goal with 73 out of 100. The other regions had lower scores: Washington, 69; Southern California 61; Central California 54; and Northern California 46.

Coastal Protection assesses the ability of those two habitats, as well as sand dunes, to protect coastlines against flooding and erosion. Again, Oregon led the five regions, this time with a score of 71. Washington and Southern California scored 57; Central California 55; and Northern California 51.

The historic loss of all three habitats has contributed to low scores for these goals and lower benefits for human well-being. California has lost 91% of its salt marshes — about five million acres — since 1850. Oregon and Washington have lost about 35% of their salt marshes. By contrast, historical maps showed that the coast of New England, which has a much longer settlement history, has lost an estimated 37 percent of its historical salt marsh coverage.

Surprisingly, the Ocean Health Index found that despite new policies and many restoration efforts, most of the habitats continued to lose ground from 2001 to 2006. Longer-term data available for the U.S. west coast showed that the status of these habitat-based goals and sub-goals has declined over the decade from 2000 to 2010. Despite these trends, near-term future scores indicate that the status of salt marshes, sand dunes and seagrass is likely to improve owing to more effective management actions and other resilience measures.

Destruction of salt marshes reduces the amount of carbon being actively stored and also releases large amounts into the atmosphere when marshes are destroyed. In addition, the loss of salt marshes decreases nursery areas and food supplies for commercially important fish and invertebrates; reduces coastal protection from flooding and erosion; harms biodiversity; impacts some touristic and recreational activities; and reduces water quality.

In the regional assessment, the West Coast as a whole scored highest in tourism and recreation (99), marine livelihoods and economies (87) and clean water (87) and lowest in sense of place (48) and artisanal fishing opportunities (57). Overall, Oregon was the highest scoring sub-region (74), followed by southern California (73), central California (71), northern California (67) and Washington (65). Though not strictly comparable, the overall regional score was slightly higher than the global score of 67 for the entire U.S. in 2012 and 2013, probably because the U.S. global score included Alaska, Hawaii, the East Coast and the Gulf of Mexico.

“Regional data improved our insight into the health of the waters along the rich and productive U.S. west coast,” said Steve Katona, managing director for the Ocean Health Index, “allowing us to set region-specific targets that can guide managers and policy makers toward actions that best benefit both ocean life and human well-being.”