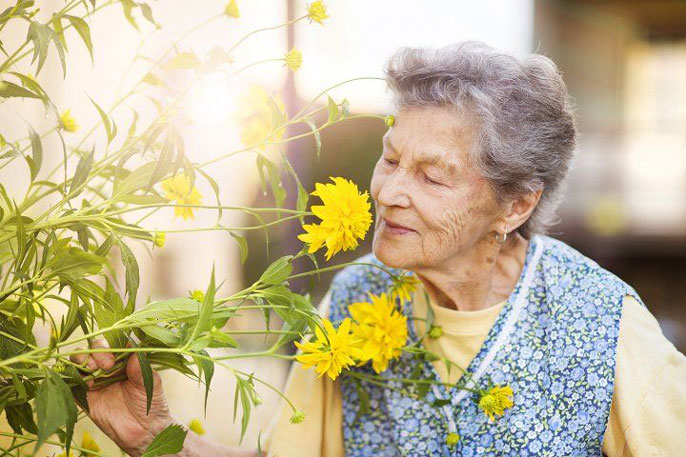 Seniors who can identify smells like roses, turpentine, paint-thinner and lemons, and have retained their senses of hearing, vision and touch, may have half the risk of developing dementia as their peers with marked sensory decline.

In a study by UC San Francisco, researchers tracked close to 1,800 participants in their 70s for a period of up to 10 years to see if their sensory functioning correlated with the development of dementia. At the time of enrollment, all participants were dementia-free, but 328 participants (18 percent) developed the condition over the course of the study.

Among those whose sensory levels ranked in the middle range, 141 of the 328 (19 percent) developed dementia. This compares with 83 in the good range (12 percent) and 104 (27 percent) in the poor range, according to the study, which published in Alzheimer’s and Dementia: The Journal of the Alzheimer’s Association on July 20, 2020.

Previous research has centered on the link between dementia and individual senses, but the UCSF researchers’ focus was on the additive effects of multiple impairments in sensory function, which emerging evidence shows are a stronger indicator of declining cognition.

“Sensory impairments could be due to underlying neurodegeneration or the same disease processes as those affecting cognition, such as stroke,” said first author Willa Brenowitz, Ph.D., of the UCSF Department of Psychiatry and Behavioral Sciences, and the Weill Institute for Neurosciences. “Alternatively, sensory impairments, particularly hearing and vision, may accelerate cognitive decline, either directly impacting cognition or indirectly by increasing social isolation, poor mobility and adverse mental health.”

While multiple impairments were key to the researchers work, the authors acknowledged that a keen sense of smell, or olfaction, has a stronger association against dementia than touch, hearing or vision. Participants whose smell declined by 10 percent had a 19 percent higher chance of dementia, versus a 1-to-3-percent increased risk for corresponding declines in vision, hearing and touch.

“The olfactory bulb, which is critical for smell, is affected fairly early on in the course of the disease,” said Brenowitz. “It’s thought that smell may be a preclinical indicator of dementia, while hearing and vision may have more of a role in promoting dementia.”

The 1,794 participants were recruited from a random sample of Medicare-eligible adults in the Health, Aging and Body Composition study. Cognitive testing was done at the beginning of the study and repeated every other year. Dementia was defined by testing that showed a significant drop from baseline scores, documented use of a dementia medication or hospitalization for dementia as a primary or secondary diagnosis.

Multisensory testing was done in the third-to-fifth year and included hearing (hearing aids were not allowed), contrast-sensitivity tests for vision (glasses were permitted), touch testing in which vibrations were measured in the big toe, and smell, involving identifying distinctive odors like paint-thinner, roses, lemons, onions and turpentine.

“We found that with deteriorating multisensory functioning, the risk of cognitive decline increased in a dose-response manner,” said senior author Kristine Yaffe, M.D., of the UCSF departments of Psychiatry and Behavioral Sciences, Epidemiology and Biostatistics, and Neurology, as well as the San Francisco VA Health Care System. “Even mild or moderate sensory impairments across multiple domains were associated with an increased risk of dementia, indicating that people with poor multisensory function are a high-risk population that could be targeted prior to dementia onset for intervention.”

The 780 participants with good multisensory function were more likely to be healthier than the 499 participants with poor multisensory function, suggesting that some lifestyle habits may play a role in reducing risks for dementia. The former group was more likely to have completed high school (85 percent versus 72.1 percent), had less diabetes (16.9 percent versus 27.9 percent) and were marginally less likely to have cardiovascular disease, high-blood pressure and stroke.

About UCSF: The University of California, San Francisco (UCSF) is exclusively focused on the health sciences and is dedicated to promoting health worldwide through advanced biomedical research, graduate-level education in the life sciences and health professions, and excellence in patient care. UCSF Health, which serves as UCSF’s primary academic medical center, includes top-ranked specialty hospitals and other clinical programs, and has affiliations throughout the Bay Area.