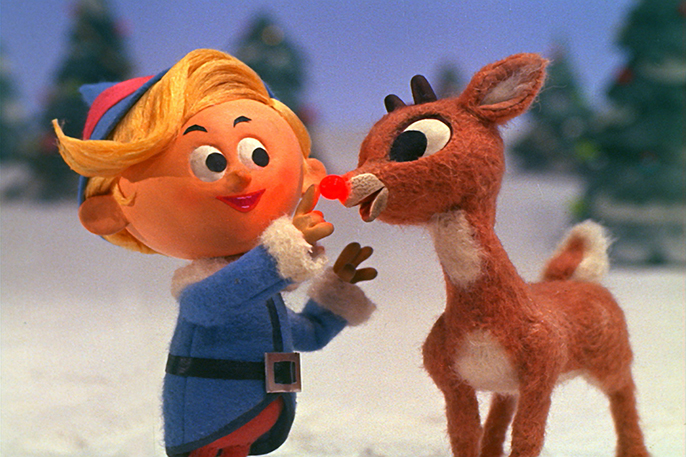 Hermey, the wannabe dentist, and Rudolph in the holiday classic, "Rudolph the Red-Nosed Reindeer."

Want to spark some lively discussions this December? Forget politics; ask friends and family to name the best holiday movies instead.

Derek Burrill, UCR’s associate professor of media and cultural studies, has gotten the ball rolling with his top 10 favorites, which so intrigued the Inside UCR staff that we’re reprinting them here with only a small word of warning: Not all of these films are family friendly.

And as an added bonus: Here’s a movie that  most likely be on this list next year:

“Krampus” – A potentially great horror movie that you can use to scare the kids into behaving.

If this list doesn’t ease your holiday stress, here are some parting words from Kate Sweeny, associate professor of psychology:

The holidays often bring to mind delightful memories of one’s childhood, coming together as a family to share gifts, conversation, and a delicious meal, Sweeny observes. “With these memories come high expectations, perhaps unrealistically high, for the holiday ahead. Research finds that lofty expectations are easily shattered, leaving painful disappointment in their wake.”

Perhaps, Sweeny says,  the optimal strategy is to “embrace joyful optimism while pairing it with a dose of realism about the potential pitfalls that accompany a hectic time of spending, travel and visits with family.”

And, of course, heated debates about holiday films….(“Black Christmas”? “Die Hard”?!  How could this list NOT include “Miracle on 34th Street” and “White Christmas”!?)