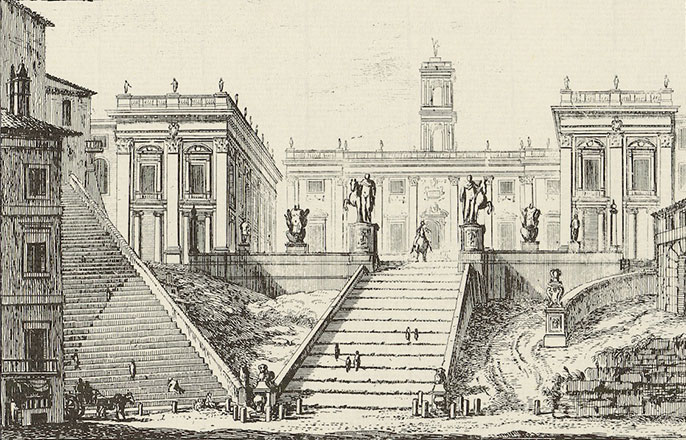 View of the Campidoglio (Capitoline Hill), home of the Capitoline Museum

In 1734, almost 60 years before the Louvre made its debut in Paris, the Museo Capitolino (Capitoline Museum) opened in Rome. Established under Pope Clement XII, it was the first public art museum of international importance and served as the model for such institutions as we know them today.

How the Capitoline came to be — and how it managed to beat the Louvre by more than half a century — is a question being asked and answered by UC Santa Barbara’s Carole Paul. She recently received a prestigious fellowship from the National Endowment for the Humanities, which will support a book project on the Capitoline Museum as the archetype of the modern public art museum. “The book will be about the unrecognized importance of this museum and how it changes our perceptions of the history of public art museums,” she explained.

Misunderstanding the history of these early institutions, she added, impacts the way we view museums today and consider what they should be in the future. “The widespread notion that the first public art museum was the Louvre, which opened in 1793, conveniently associates the moment of origin with the French Revolution,” said Paul, a lecturer in the Department of History of Art and Architecture. “But it simply is not true.”

According to Paul, public art museums began to spring up all over Europe, especially in Italy (the Uffizi Gallery in Florence is one example), earlier in the 18th century, which places the Louvre farther back in line rather than front and center, as she has shown in a book she recently edited, “The First Modern Museums of Art” (The J. Paul Getty Museum, 2012). “This revision is important because it displaces the motivation for the emergence of this new type of institution from revolutionary politics onto other factors, such as the internationalization of Enlightenment values and the growth of cultural tourism.”

“There was a long tradition in Rome in the 18th century of private collections that became sort of semi-public museums,” Paul said. One of the most important, she noted, is the collection of the Borghese family, now at Villa Borghese, about which she has written two books and curated an exhibition at the Getty Research Institute.

“Many elite families had these collections,” she continued. “They were among the premier sights for aristocratic European travelers on the Grand Tour, who went to Rome expressly to visit them.”

In the 1770s, Paul said, the wealthy Borghese family of Rome converted their suburban villa on the Pincian Hill into a space specifically designed to display their collection of ancient and early modern sculpture. “The spectacular redecoration of the rooms, together with the reinstallation of the collection, had the intended effect of turning the villa into one of the most admired and frequently visited attractions for foreign travelers on the Grand Tour,” she said.

“Although not a public museum, strictly speaking, it deliberately addressed a larger, more diverse audience, impressing tourists with a dazzling new idea of what a museum could be,” said Paul. “Such spaces were designed to stimulate social interaction — well-to-do visitors from all over Europe met and mixed in front of works of art and were expected to exhibit their knowledge and taste in polite conversation.”

These exchanges were a crucial part of the experience, Paul continued, and visitors were as much on display as the objects, for the museum was, in effect, a stage on which they performed an ideal of enlightened civility.

Even earlier, as more and more people traveled to Rome to visit these collections, the papacy saw the potential for using its own art collections to a similar advantage. “They saw it as an opportunity to exhibit the great heritage of ancient Rome and to represent themselves as enlightened modern patrons of art,” said Paul. “They also saw it as a way to protect their cultural patrimony.”

So began the Capitoline, the earliest institution to manifest the defining characteristics of the public art museum as it has evolved into the present day. “The scholarly narrative is that public museums really are about democracy and they were brought about by this ‘modern’ form of government,” Paul noted. “But it’s a combination of tourism and Enlightenment values that gave birth to the Capitoline Museum and thus gave birth to the public art museum.