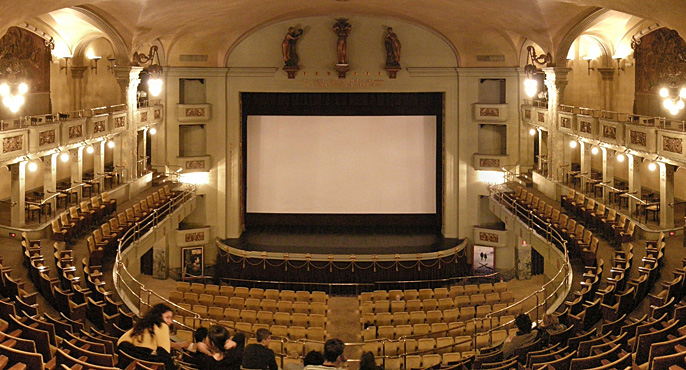 What do Hollywood moguls holding their breath this week for an Oscar nomination have in common with the influence peddlers on K Street in Washington, D.C.? More than you might imagine, suggests new research by two UCLA sociologists.

Gabriel Rossman and Oliver Schilke analyzed 25 years worth of data on mainstream cinema and discovered that makers of films that are likely to appeal to the Academy of Motion Picture Arts and Sciences face the same risk-and-reward structure as lobbyists who contribute to political candidates in the hopes of getting favorable treatment when laws are written or pork doled out.

"The pursuit of Academy Awards, much like the pursuit of favorable regulation, is characterized by an economic structure where players make costly bids," said Rossman, who is based in UCLA's College of Letters and Science. "You pursue this thing that's valuable, and you may or may not get it. If you don't get it, you don't get your money back. But if you do get it, the results are really valuable."

The findings appear in the February issue of the American Sociological Review, which is published online in time for Thursday's announcement of the 2014 Oscar nominees.

As a researcher, Rossman focuses on statistical analyses of fame in culture and mass media, especially in the realms of pop-music radio and Hollywood films. In 2008, he attracted attention with a study that identified how film actors are more likely to get Oscar nominations when working with elite collaborators.

In the latest study, he and Schilke used a Tullock lottery — a model economists have used to analyze political lobbying — to interpret the costs and benefits of making movies with so-called "Oscar appeal" (often mocked as "Oscar bait").

Using online Internet Movie Database (IMDb) records on nearly 3,000 Oscar-nominated films released between 1985 and 2009, Rossman and Schilke gathered descriptions of the thematic elements of each movie, which IMDb describes as "genres" and plot "keywords." The genres of drama, war, history and biography were strong predictors of getting Oscar nominations, as were plot keywords involving political intrigue, disabilities, war crimes and show business.

The researchers also recorded details such as the time of year the movie was released — release toward year's end is the strongest predictor of a nomination — and what kind of studio was involved. (During the period examined, release by an independent division of a major studio was found to be a strong predictor.)

Using these variables, Rossman and Schilke built an algorithm that strongly predicts the number of Oscar nominations a movie will get.

"The algorithm shows Oscar appeal, or how many Oscar nominations we'd expect you to get based on how similar your movie is to movies that recently got nominated," said Schilke, a Ph.D. candidate in sociology at UCLA.

The sociologists then used U.S. box office receipts and production costs as reported on another online film site — Studiosystem.com — to determine the studio's rate of return on their investment. With this information, they were able to gauge the effect on the financial bottom line of having Oscar appeal and of getting a nomination from the Academy.

Not surprisingly, movies that get nominated for an Academy Award enjoy a considerable bounce in ticket sales. In some circumstances, the box office receipts of films with nominations are two to three times higher than comparable films that don't get nominations.

Meanwhile, box office receipts take a hit — albeit a small one — when studios make a movie with Oscar appeal that doesn't succeed in getting a nomination. However, since lots of movies have Oscar appeal but relatively few get nominations, the small penalty for the former balances out the big bonus for the latter on average, the researchers said.

Take a movie with an average production budget. If the film ranks in the fifth percentile (very low) of Oscar appeal, like a family or sci-fi movie released in spring, it would be expected to bring in about $32 million at the box office, according to the model the researchers constructed with historical data. A movie with median Oscar appeal (i.e., a typical movie) would be forecast to bring in about $28 million in box office receipts. (For simplicity's sake, the study only looked at U.S. box office receipts, which is highly correlated with other revenue streams.)

The box office receipts for a movie in the 95th percentile of Oscar appeal — think a biopic released in December by the independent division of a major studio dealing with themes of political intrigue — will depend on how many nominations the film received. With zero nominations, the movie would be expected to make about $24 million; with one, about $40 million; and with five nominations, its receipts would grow to roughly $92 million.

The simple fact of an Oscar nomination will spur individuals to see films they might otherwise have little interest in, said Rossman, an associate professor of sociology. "Audiences don't like the kind of movies that get Oscars, but they do like the Oscars," he said.

Not that this would be any news to people in the industry, Rossman noted. Just as lobbyists have their eye on a specific prize when they make political contributions, he believes studios tend to decide early on whether they're going to pursue a nomination to improve their odds of "gaming the system." The characteristics of movies with Oscar appeal are just too identifiable to not take them into consideration.

"While there is the occasional 'My Cousin Vinny,' it's extremely rare for movies with below-average Oscar appeal to get nominated," Rossman said. "For the most part, in order to get nominated, you have to be doing the kinds of things that will get you nominated — such as create a biopic or open around Christmas time."

So distinctive are the characteristics of movies with Oscar appeal, in fact, that fan magazines like Entertainment Weekly recognize them right away. Rossman and Schilke systematically surveyed that magazine and found that it almost never failed to correctly predict nominees for all categories, although their prediction lists were at least twice as long as the number of actual nominations made by the Academy.

"They have very few false negatives," Rossman said. "There's something really recognizable about Oscar-ness, and I don't think it's just quality. It's more like a genre convention."

"You could take a movie like 'Terminator 2,' and most people would agree it was a pretty good movie, but nobody was shocked that it didn't get Academy Awards outside of the technical categories," Rossman noted. "Whereas you can take other movies, like 'Crash,' which a lot of people would agree is actually a bad movie, but nobody was shocked that it got a lot of Oscar nominations, including best picture and original screenplay."

The researchers contrasted their findings with recent work by colleagues on ranking systems. While someone can always benefit by moving up or down from any position in a ranking system like the ones published by U.S. News and World Report for institutions of higher education, with prizes like the Oscars one either wins or does not. The fact that a movie either does or does not receive nominations is what makes the parallel between Hollywood and K Street so apt, Rossman believes.

"Just like an industry seeking favorable legislation either does or does not get the legislation but first has to provide campaign contributions and the like, a movie studio has to commit to making a movie that follows an Oscar strategy before finding out if it will actually get nominations," he said.

But the parallel ends there. While the pressures lobbyists bring to bear is generally viewed as having a negative effect on the democratic process, Rossman and Schilke believe pressures imposed by the Oscar race have beneficial results.

"In pursuit of these valuable nominations, movies with tougher subjects and movies with a much more limited appeal get made more frequently than would otherwise be the case," Rossman said.