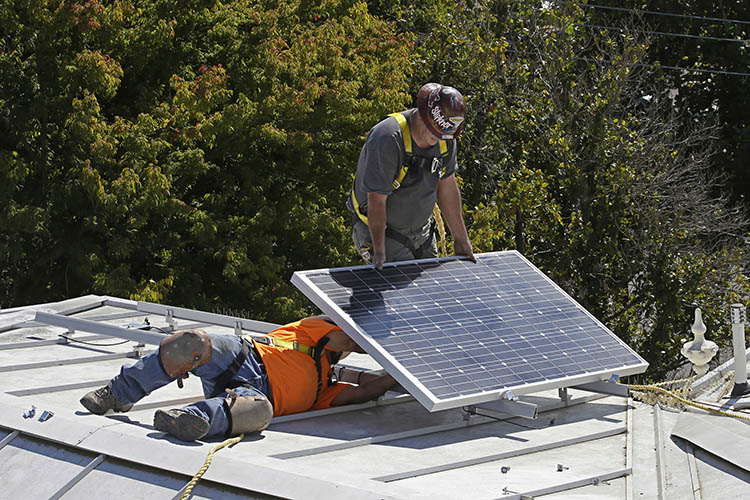 Last week, the Pacific Gas and Electric Company took the unprecedented step of cutting power to nearly 750,000 Northern California customers, including much of the UC Berkeley campus, in an effort to mitigate the risk that active transmission lines could spark a wildfire during dry and windy conditions.

Berkeley News spoke with Alexandra “Sascha” von Meier, an adjunct professor of electrical engineering and computer science at UC Berkeley and director in the California Institute for Energy and Environment’s Electric Grid program area, about the risks posed by the current energy grid and possible solutions moving forward.

Berkeley News: How does the current power grid pose a fire risk? How do fires get started?

Von Meier: There are a couple of ways. The most common situation would be that some tree branch just gets too close to one power line and touches it or draws an arc across the air that can ignite the tree limb. There are also some protective devices, especially fuses, which can actually drop tiny pieces of hot metal down and ignite dry grass.

And an arc is an electric spark, essentially.

Right, it’s like an electric spark. It’s just like what you would see, for example, if you have a lamp that is turned on and then you plug it in the outlet and it makes that little zap, only much bigger.

Climate change will only increase the probably that California will experience the dry, windy conditions that are ripe for spreading wildfires.

Are there any ways we can make the grid safer, or will Californians just have to accept fire safety power outages as the new normal?

It depends on how much money you want to spend, but you’ll always have competing pressures of safety and reliability and cost.

In terms of making the grids safer with respect to fires, one main thing that would be helpful is to make them smarter. There are improvements that can be made using better sensors, and that’s work that folks at Berkeley, myself included, are studying. For example, how can we detect very small faults quickly, and just gather more intelligence from the electrical infrastructure in general?

But a long-term strategy that I personally favor would be to develop a better ability to provide power locally. Right now, if the power is out in Berkeley, it’s not because a fire would start in Berkeley. It’s because Berkeley’s power comes from transmission lines that go over the East Bay Hills. It’s on the East side of the hills where the hazardous conditions are, but it’s just impossible to bring power into the Bay Area without those transmission lines.

So, it would be helpful if we had more power generation locally, especially for buildings or people who have particular needs for that. Right now, we do that with microgrids and back-up generators in places like airports, hospitals, and data centers. But it would be a good strategy to better recruit residential solar as well.

Can people use existing solar panels to power their homes during a shut off?

A big problem right now is that we have a whole lot of solar photovoltaics installed on people’s rooftops, but in an outage situation like this, almost all of them are useless because they can’t be safely energized. That’s because, by rule, by the interconnection agreement, when the power in your neighborhood is out, your solar inverter also has to be shut off, unless you invested in a whole separate system where you have a battery at your house, and you disconnect from the grid. And that’s something that mostly only wealthier people can afford.

But what I think is going to be more and more interesting going forward, and maybe this event is going to spark a little motivation on that, is to better connect existing solar and additional solar that’s going to come online, in a way that it can operate safely locally, either on PG&E’s distribution network or independently.

One of the research projects that we’re working on at the California Institute for Energy and the Environment and Berkeley is called the Ecoblock project, which is actually looking at a multi-customer microgrid for exactly this kind of scenario, where you can share the solar resources and share energy storage among multiple households on a city block.

Could you tell me a little bit more about what a multi-customer microgrid would look like and how it would work?

So, there are actually a lot of different designs for microgrids and different combinations of resources. What’s unique about the Ecoblock is that we intend to aggregate multiple residential customers, say a dozen or so properties, that didn’t previously have that much to do with each other, and connect them on a microgrid separate from PG&E where they would be sharing the same storage resource. That makes it more economical than for everyone to have, for example, a battery in their garage.

Do you think transitioning to locally sourced power might be a more likely scenario than going out and beefing up these old grids that we are currently living with?

Well, in terms of beefing up the grids, or making the grids safer with respect to fires, the main thing that would be helpful is to make them smarter, to recognize problems immediately as they happen, because the fire hazard is pretty much inherent, even if you work hard to manage the vegetation. The other option that really would address the fire hazard is putting lines underground, and that is a whole different order of price tag, especially if you are looking at Northern California, where you have thousands of miles of transmission lines.

And then you would still have vulnerabilities other than fire. Underground lines are much more reliable than overhead lines because they are impervious to falling trees and that kind of thing, but there are some other risks that still exist, such as cybersecurity risks. If you imagine a possible cyberattack against the electric grid, in that case having a physically more secure transmission line doesn’t help you at all. Whereas, having the ability for communities to be locally resilient and sustainable makes a big difference.