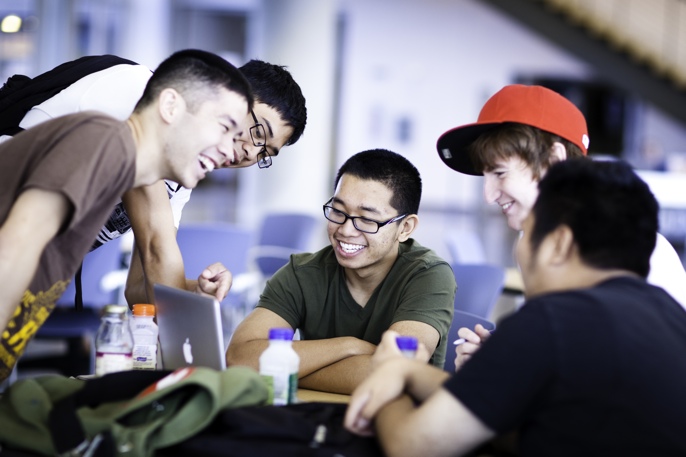 What makes us happy? Family? Money? Love? How about a peptide?

The neurochemical changes underlying human emotions and social behavior are largely unknown. Now though, for the first time in humans, scientists at UCLA have measured the release of a specific peptide, a neurotransmitter called hypocretin, that greatly increased when subjects were happy but decreased when they were sad.

The finding suggests that boosting hypocretin could elevate both mood and alertness in humans, thus laying the foundation for possible future treatments of psychiatric disorders like depression by targeting measurable abnormalities in brain chemistry.

In addition, the study measured for the first time the release of another peptide, this one called melanin concentrating hormone, or MCH. Researchers found that its release was minimal in waking but greatly increased during sleep, suggesting a key role for this peptide in making humans sleepy.

The study is published in the March 5 online edition of the journal Nature Communications.

"The current findings explain the sleepiness of narcolepsy, as well as the depression that frequently accompanies this disorder," said senior author Jerome Siegel, a professor of psychiatry and director of the Center for Sleep Research at UCLA's Semel Institute for Neuroscience and Human Behavior. "The findings also suggest that hypocretin deficiency may underlie depression from other causes."

In 2000, Siegel's team published findings showing that people suffering from narcolepsy, a neurological disorder characterized by uncontrollable periods of deep sleep, had 95 percent fewer hypocretin nerve cells in their brains than those without the illness. The study was the first to show a possible biological cause of the disorder.

Since depression is strongly associated with narcolepsy, Siegel's lab began to explore hypocretin and its possible link to depression.

Depression is the leading cause of psychiatric disability in the U.S, Siegel noted. More than 6 percent of the population is affected each year, with lifetime prevalence exceeding 15 percent. Yet the use of antidepressants, such as selective serotonin reuptake inhibitors (SSRIs), has not been based on evidence of a deficiency, or excess, of any neurotransmitter. Several recent studies have questioned whether SSRIs, as well as other depression-fighting drugs, are any more effective than placebos.

In the current study, the researchers obtained their data on both hypocretin and MCH directly from the brains of eight patients who were being treated at Ronald Reagan UCLA Medical Center for intractable epilepsy. The patients had been implanted with intracranial depth electrodes by Dr. Itzhak Fried, a UCLA professor of neurosurgery and psychiatry and a co-author of the study, to identify seizure foci for potential surgical treatment. The location of electrodes was based solely on clinical criteria. The researchers, with the patients' consent, used these same electrodes to "piggyback" their research. A membrane similar to that used for kidney dialysis and a very sensitive radioimmunoassay procedure were used to measure the release of hypocretin and MCH.

The patients were recorded while they watched television; engaged in social interactions such as talking to physicians, nursing staff or family; ate; underwent various clinical manipulations; and experienced sleep–wake transitions. Notes of activities were made throughout the study every 15 minutes in synchrony with a 15-minute microdialysis sample collection by a researcher in the patients' rooms.

The subjects rated their moods and attitudes on a questionnaire, which was administered every hour during waking.

"These results suggest a previously unappreciated emotional specificity in the activation of arousal and sleep in humans," Siegel said. "The findings suggest that abnormalities in the pattern of activation of these systems may contribute to a number of psychiatric disorders."

Siegel noted that hypocretin antagonists are now being developed by several drug companies for use as sleeping pills. The current work suggests that these drugs will alter mood as well sleep tendency.

The Siegel lab has also previously reported that hypocretin is required for the "pursuit of pleasure" in rodents but plays no role in avoidance behavior.

"These results, in conjunction with the current findings, suggest that hypocretin administration will elevate both mood and alertness in humans," Siegel said.