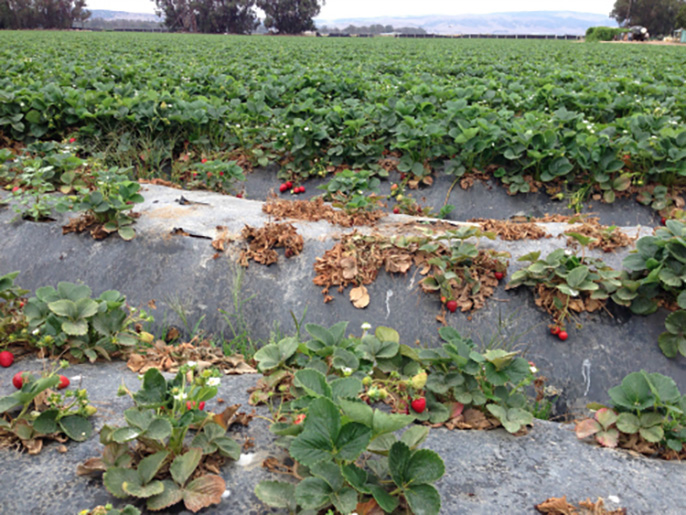 Methyl bromide has been used by growers since the 1970s to control soil pathogens, weeds and nematodes. Pictured are pathogen-infected plants in a buffer zone where fumigants can't be applied.

The powerful fumigant methyl bromide will be retired from California’s strawberry fields at the end of this year after more than 20 years of fierce debate over its effects and alternatives.

According to new research published by UC Santa Cruz professor and food studies expert Julie Guthman, these debates often pit the health and well-being of farm workers against the economic viability of growers while overlooking the constraints and availability of farm land.

Guthman has spent the past several years immersed — literally and figuratively — in the field to better understand the challenges the strawberry industry faces in a post-methyl bromide world.

“California strawberry growers are in a position in which they have to change a pesticide regime that has served them well,” Guthman writes in the Journal of Rural Studies. The article reports on part of a larger research project she has conducted with support from the National Science Foundation.

Strawberry growers in California have long depended on methyl bromide, the most effective chemical to control soil-borne pathogens and weeds. Its widespread use has helped make strawberries one of California’s most lucrative crops. In 2014, annual sales totaled $2.5 billion.

But methyl bromide is also hazardous to humans and the environment. Because of its documented impact on the ozone layer, the Montreal Protocol mandated a global phase-out as part of its 1987 pact to reduce ozone-depleting substances. Despite U.S. promises to stop importing and producing the substance, California farmers have long continued its use thanks to what’s known as a “critical use exemption (CUE).”

Because of these exemptions, the California strawberry industry lagged in developing substitutes, Guthman says. Simply put, growers felt they did not need to find alternatives, she writes in a recent issue of California Agriculture that explores the future of the strawberry industry. CUEs gave growers hope that the exemptions would persist. As a result research into less toxic solutions slowed.

For example, one alternative was methyl iodide, a pre-plant fumigant that was developed as a substitute, but became even more controversial than the compound it was meant to replace. The California Department of Pesticide Regulation allowed it on the market despite findings of its own agency scientists that it could result in significant health risks to farm workers and the general population.

Opposition surged. How could the DPR register methyl iodide against its own internal recommendations, opponents charged. Earthjustice, an environmental law organization, and California Rural Legal Assistance sued the DPR for failing to follow environmental law and be transparent in their decision-making process. Just before a judge was to rule on the dispute, methyl iodide’s licensee Arystra LifeScience pulled it off the market saying it was no longer economically viable.

Guthman wanted to know why. She discovered that the main reason many farmers didn’t touch the pesticide was fear of public backlash. In the run-up to the legal proceedings, more than 53,000 people submitted comments contesting the chemical. Farmers feared protesters in their fields and were worried that consumers would not buy berries linked to the pesticide.

“Activism contributed to the withdrawal of methyl iodide; it scared many shippers and growers into non-adoption and made extension agents and pest-control advisors skeptical of promoting it,” Guthman says.

Other alternatives to methyl bromide still come at a human cost.  Growers are continuing to use chloropicrin, another soil fumigant, which has long been used in combination with methyl bromide. However, both the U.S. Environmental Protection Agency and the state DPR have designated it a toxic air contaminant. As a result, DPR has recently mandated increased buffer zones, extended waiting periods for tarp removal and increased monitoring requirements, all to mitigate environmental harm to the community.

However, as Guthman has argued, these mitigation efforts still fail to adequately protect the lives of farmworkers.

“Buffer zones cannot meaningfully protect those who apply the fumigants, work in nearby fields, or work in treated fields post-fumigation,” writes Guthman. Neighbors’ lives are privileged over workers, she argues.

With strawberry growers facing strict regulatory constraints, why not switch from conventional to organic growing practices?

Guthman says that many growers are experimenting with organics because of the high prices organic strawberries receive in the market. But it is still not an economic option for some.

“Transitioning involves avoiding the application of disallowed substances for three years, while not receiving the price premium for organics,” Guthman writes in her Journal of Rural Studies article.

In short, Guthman finds the strawberry industry is in a real bind. Her next book will explore the historical origins of the predicament and will look at how the factors underwriting the industry’s success have changed into threats.