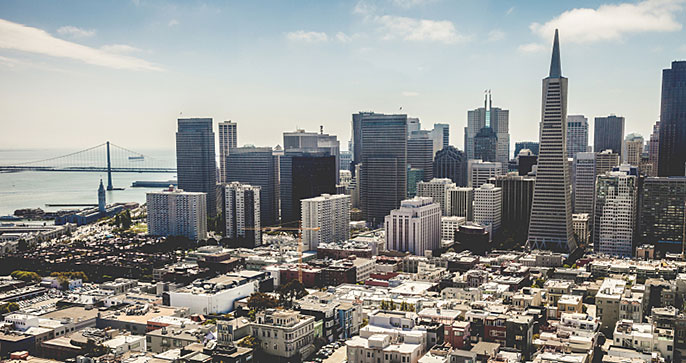 Paul Waddell hopes to improve life in San Francisco and to contribute to the growing knowledge about how Big Data can affect significant social change through the city's Entrepreneurs in Residence program.

Paul Waddell, a city planning professor at the University of California, Berkeley, with a penchant for conducting research with what he calls his “big urban data,” is putting his work to a real-world test in San Francisco.

His high-tech startup “Synthicity” has been chosen from a field of nearly 200 applicants as one of San Francisco’s six new Entrepreneurs in Residence, a program that is bringing together the private sector and city departments to explore innovative solutions to civic challenges.

Waddell said he hopes to improve life in San Francisco and to contribute to the growing knowledge about how Big Data can affect significant social change, a subject that he said is of increasing concern in academia and beyond, as reflected on campus by the new Berkeley Institute for Data Science and related initiatives.

He said he launched Synthicity as a Berkeley startup in late 2012 to bring research ideas in urban planning, analysis and visualization to scale by developing new technologies to translate massive amounts of data into practical solutions to a range of urban problems.

San Francisco Mayor Ed Lee recently announced the entrepreneurship winners, who will spend sixteen weeks collaborating with City departments to test innovative solutions to some of the city’s most pressing problems.

“San Francisco is home to the world’s greatest entrepreneurs, the ones who have ‘disrupted’ numerous industries, and we are bringing those same disruptive technologies to improve delivery of City services for our residents,” said Mayor Lee. “The Entrepreneurship-in-Residence program brings together government and startups to explore ways we can use technology to make government more accountable, efficient and responsive.”

Synthicity will work with the San Francisco Planning Department on new simulation, planning and urban development tools and technologies.

The Synthicity team — which includes a UC Berkeley Ph.D. student in the city and regional planning program and two alumni from the Masters in City Planning program, among others — integrate and analyze data on urban parcels, buildings, businesses, households and transportation, and conduct statistical analyses on that integrated data to assess city planning problems.

Waddell said Synthicity staff hope to hone their insights into the challenges of a large, complex city like San Francisco, then refine and improve Synthicity’s software modeling platforms to help find solutions.

“If we succeed in improving the productivity and effectiveness of planners in an iconic city like San Francisco — with its well-known active citizenry and development challenges — we think that will show that we can do it just about anywhere,” said Waddell.

Waddell said that Synthicity first formed as a consultancy to support planning agencies with the technical know-how to use UrbanSim, a software-based urban modeling platform that he designed to simulate real estate markets, demands for new housing and other land uses, as well as land prices, rents, development decisions and how changing land use policies impacts alternative transportation investments.

“It’s a bit like SimCity,” said Waddell, referencing the popular city-building video game. “But UrbanSim is for informing actual decisions, in real communities.”

UrbanSim has been used by planning agencies in regions as diverse as Denver, Detroit, Salt Lake City, Seattle and Paris, to assess potential impacts of major urban landscape and market changes due to proposed projects or policy changes.

Mike Reilly, a UC Berkeley city planning graduate, is a planner with the Association of Bay Area Governments based in nearby Oakland. He has used UrbanSim modeling for five years to examine alternate configurations for future housing and employment development. Reilly said UrbanSim is a great tool for analyzing the economic forces that shape cities and simulating how well public policies can meet regional goals.

Waddell said that for faster data visualization and analysis, some projects need even more tools than contained in UrbanSim. So under the umbrella of Synthicity, he teamed up with specialists in 3D computer graphics and students in city and regional planning to go even further.  The result is UrbanCanvas, a new platform for designing and visualizing alternative development projects and zoning policies, in conjunction with a 3D visualization platform called GeoCanvas that interprets massive urban datasets quickly and interactively.

Waddell is including a free public beta version test of GeoCanvas in his San Francisco entrepreneurship program, while also offering an early test drive to data scientists, planners, real estate analysts, market researchers and others who need to visualize large spatial datasets and do it fast. He said he wants to refine GeoCanvas and its carefully curated set of tools that eliminates much of the complexity inherent in traditional GIS systems for a final streamlined, intuitive user interface.

“We have an exciting opportunity to work in San Francisco on real-world urban problems and bring exciting new tools into practice for cities struggling to address huge issues like affordable housing and accommodating population growth for very diverse populations, while empowering residents to participate more directly,” said Waddell.