From political prisoner to international inspiration 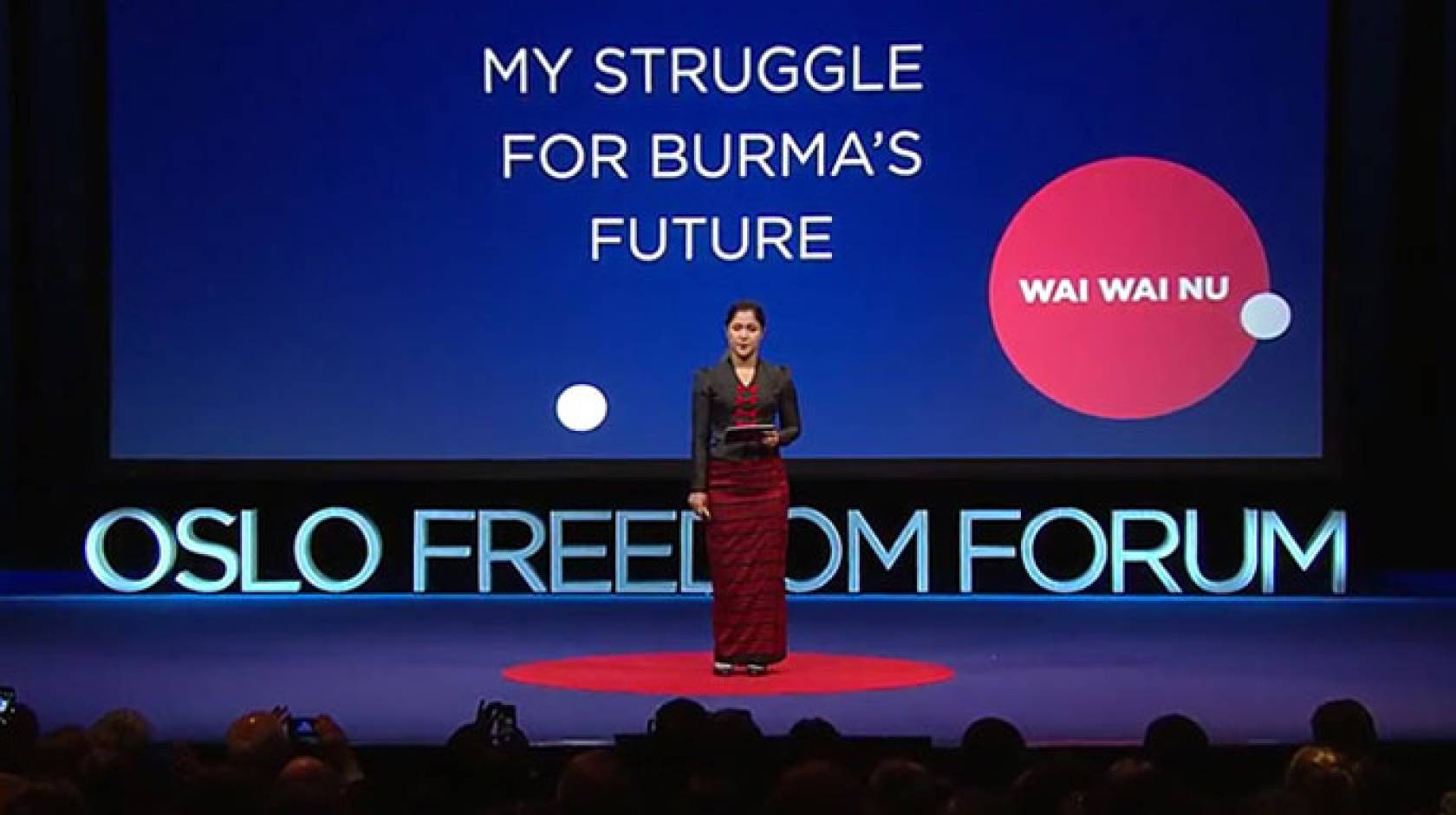 For many, life from age 18 to 25 brings a thrilling expansion of freedoms, opportunities, and experiences. For Wai Wai Nu, who spent those years as a political prisoner in Burma, it brought pain, frustration, and uncertainty.

“That was shocking and extremely hard,” said Nu, a first-year student in Berkeley Law’s Professional Track LL.M. Program. “I thought, ‘What’s going on? How can I be here without committing a crime?’ I couldn’t accept that reality for some time.”

Her family is Rohingya, a Muslim minority in the country long persecuted by the government. Many Burmese view Rohingya as illegal immigrants from Bangladesh, even though — as Nu notes — they were once regarded as indigenous group in Burma and have lived in the nation’s Rakhine State for generations.

Her father, Kyaw Min, was elected to parliament in 1990. Yet he faced ongoing harassment from Burma’s military rulers for promoting labor rights, prompting him to move his family to Yangon, the nation’s largest city. In 2005, he received a 47-year prison sentence for alleged state security and immigration law violations. Two months later, Nu, her mother, and her two siblings were charged with the same offenses and sentenced to 17 years at Insein Prison — notorious for its grim conditions.

At the time of her arrest, Nu was a second-year law student at Yangon East University. But the most poignant moment of her legal education came during a closed-door hearing with no legal representation, a quick conviction, and no available appeal.

“That’s when I saw how corrupt Burma’s legal system was and how there was no independent judiciary,” she said. “I had thought only criminals go to prison, but I met so many women there who never committed a crime. I thought, ‘When I get out, I’m going to fix it.’ I had no idea how, but I knew I had to try.”

Nu’s family was released in January 2012 with scores of other political prisoners under the new government of President Thein Sein, which promised meaningful policy reforms. Later that year, however, amid a surge of nationalist fervor and hate speech, violence erupted and religious clashes left 140,000 people homeless — mostly Rohingya.

Making up for lost time

After her release, Nu returned to Yangon East University and earned her law degree, enrolled in a one-year political education program run by the British Council, and attended other political trainings. In response to her country’s soaring violence, she launched the Women’s Peace Network-Arakan to promote better understanding of and between ethnic minorities in western Burma. Soon after, she established another nonprofit called Justice for Women, a network of female lawyers providing legal consultation and education for Burmese women.

Nu describes her collective focus as “women’s rights, human rights, and youth empowerment.” That involves meeting with youth about democracy- and peace-building efforts, educating women about how to combat sexual harassment and domestic violence, and promoting active civic participation.

She became widely known after initiating the popular #MyFriend campaign, which sought to combat hate by urging social media users to post photos of themselves with friends of diverse ethnic and religious backgrounds. In March 2017, TIME Magazine profiled her in its “Next Generation Leaders” piece.

The BBC named Nu to its Top 100 Women list in 2014, and in 2015 she was named a Top 100 Global Thinker by Foreign Policy Magazine and among the 100 Most Inspiring Women by Salt Magazine. She also participated in a democratic-transition training program for young leaders at the George W. Bush Presidential Center that year.

Nu has spoken at human rights forums around the world, including the Oslo Freedom Forum last May. She recently helped persuade the United Nations to conduct a fact-finding mission in Burma — though she lobbied for a more intensive Commission of Inquiry.

Eager to expand her ability to spark change, Nu discussed options with colleagues in her human rights network. “So many of them told me Berkeley was the place for me,” she said. “They’re so excited that I’m here, and so am I. From the teaching and services to the students and overall environment, I feel really privileged to be here.”

In many ways, Nu views the LL.M. program as a template for what she hopes to achieve back home. “You engage with people of different cultures from all over the world, and it’s so valuable to get those perspectives because they enrich your own perspective,” she said. “I’m working to foster more of that interaction in my own country.”

Nu wants to channel the legal expertise she gains in Berkeley this summer and next toward reforms aimed at the rule of law. She hopes to advance constitutional reform, in part by developing analytical research papers on certain laws, and eventually set up a small law firm to counsel and support international businesses in Burma — which can help support her nonprofits.

“Our constitution is not democratically written, and the text allows the military the most powerful positions in government,” Nu lamented. “Power should be in the public’s hands, not the military’s. Another problem is our number of discriminative laws that don’t protect the people. Our so-called democratic legislation in fact restricts freedom and rights. That’s why I started advocating for legal and constitutional reform, and why I came to Berkeley.”

Nu has fond memories of growing up on Burma’s western coast, where she faced little discrimination and interacted freely with people in different communities and ethnic groups. Now, however, she sees a region rife with fear and hopelessness.

“Persecutions against the Rohingya community have increased,” Nu said, who returned to her hometown in 2015 for the first time in more than 20 years. “It’s the same for other ethnic minorities in the country because division and persecution is a growing part of government policy.”

“Our education system teaches how to worship a dictator and love only your group, which fuels nationalism and racism,” Nu said. “But young people are still open to a different perspective, and that’s how we can change public opinion. Once we change public opinion, it’s easier to change the policies.”

As more people in Burma look to her as a role model, Nu acknowledges an ongoing adjustment to her growing public profile.

“I never intended to be a role model, but now I feel that responsibility,” she said. “I want to give hope and empower those who are disempowered. Sometimes the work feels overwhelming, but I always think I should be doing more. That’s why I’m here in Berkeley, to get the knowledge and skills I need to help create more positive change back home.”