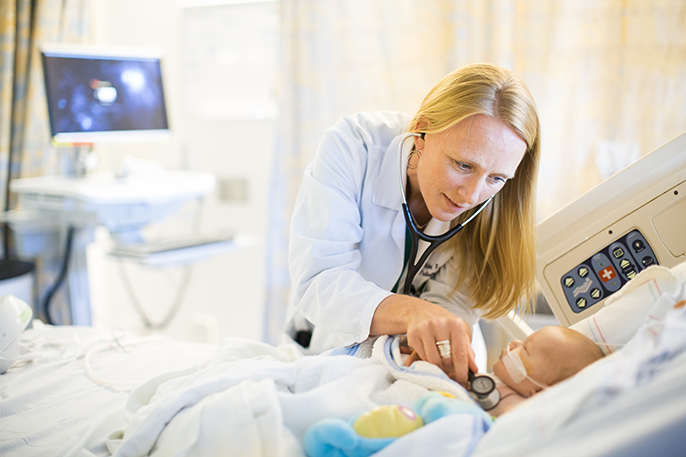 The California Kids Cancer Comparison project led by the UC Santa Cruz Genomics Institute is one of two demonstration projects selected by the new California Initiative to Advance Precision Medicine, a public-private effort launched by Governor Edmund G. Brown Jr. The initiative is being hosted by UC San Francisco, in conjunction with UC Health, which comprises the University of California's five medical centers.

Both projects aim to yield quick results for patients and involve extensive collaborations within the UC system and with other academic medical centers in California, as well as with patient advocates and companies in Silicon Valley and the biotech industry. They were selected by an expert review panel from a highly competitive group of proposals submitted by collaborative teams around the state.

Scientists at UC Santa Cruz will harness big data bioinformatics to help doctors identify effective treatments for California children with cancer who fail to respond to standard therapies. The other winning proposal, led by UCSF, will enable detection of all known pathogens with a single DNA sequencing test, to diagnose acute infections in hospitalized patients.

"Both of these projects are developing exciting new tools that promise to deliver precision medicine tests and therapies to patients within a very short timeframe, as quickly as 18 months to two years," said Atul Butte, MD, PhD, who directs UCSF's Institute for Computational Health Sciences and is heading the precision medicine initiative. "We hope the success of these first two projects will inspire others to support this initiative, so we can fund additional promising precision medicine projects to help patients."

At UC Santa Cruz, David Haussler, professor of biomolecular engineering and scientific director of the Genomics Institute, and research associate Theodore Goldstein, a former Apple vice president, will lead the development of a secure Internet-based networking system to match cancer therapies to individual children based on the genetic characteristics of their tumors. The California Kids Cancer Comparison will enable clinicians to sort through a much larger pool of genetic data than has previously been available, including tumor sequencing data from children throughout California and around the world, as well adults. And it will enable patients, their advocates, clinicians and researchers to upload, analyze and communicate genomic information and associated data through MedBook, a social media platform developed by Goldstein that maintains privacy and security for patients' data.

"Our goal is simple: Every kid in California with cancer who needs a second chance, should get a second chance," Haussler said. "Currently, too many kids are not getting the full advantage of complete genomic analysis. If the standard treatment does not cure a child with cancer, then we need to be doing all that we possibly can to use genomic analysis to come up with an alternate therapy."

The team includes such industry partners as NuMedii, Cisco, and DNAnexus. And it builds on the UC Santa Cruz Treehouse Childhood Cancer Project, which enables combined analysis of adult and pediatric cancer genomic data sets, including those generated by the National Cancer Institute’s tumor genomics initiatives, as well as pediatric clinical sequencing trials.

The second winning proposal was from a team led by Charles Chiu, MD, PhD, an associate professor of laboratory medicine at UCSF. It aims to use genetic sequencing to diagnose patients who are hospitalized with acute, potentially life-threatening infectious diseases.

Chiu's team includes investigators from UCSF, UC Davis, UC Berkeley and UCLA, and from such private companies as Syapse, DNAnexus, Quest Diagnostics and Google Genomics. The team hopes to make the test available to hospitals around the state and, eventually, the country.

The California Initiative to Advance Precision Medicine, announced in April, is an important step toward enabling the state’s scientists to study any disease and even the health care system itself, using data from across the UC health care system and other academic medical centers and health care providers throughout California. The goal is to integrate clinical data with genomic, environmental, socioeconomic, mobile and other data from patients so scientists can determine disease mechanisms and develop precise therapies.

UC San Francisco is hosting the two-year initiative through UC Health with $3 million in startup funds from the state; $2.4 million of this, divided evenly between the two proposals, is funding the demonstration projects. The public-private initiative aims to leverage these funds with contributions from other academic and industry partners.

The initiative will also inventory the public and private precision medicine assets in the state, and convene experts in medicine, technology, privacy, bioethics and intellectual property to help ensure the secure, fair and respectful exchange of data and knowledge.