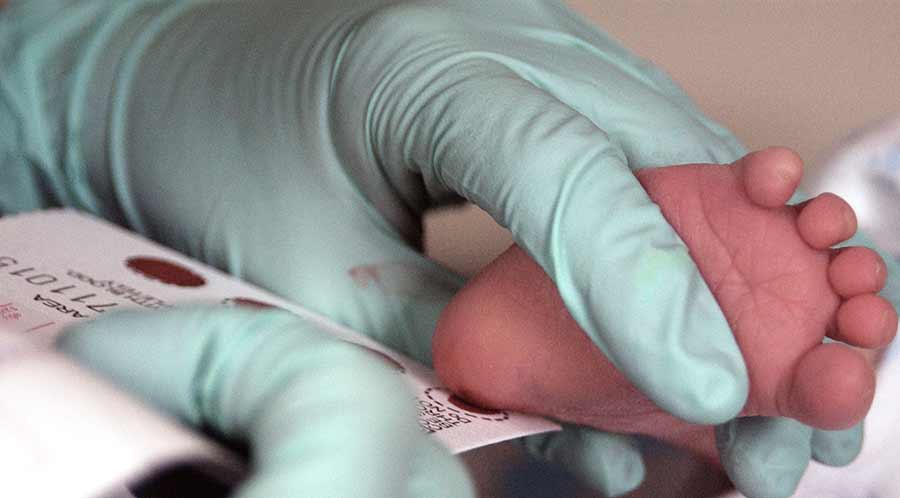 At birth, blood samples are taken from newborns and used to screen for genetic diseases. A new research study will help determine whether these drops can also help predict autism risk.

Within days of birth, a few drops of blood are collected from every newborn in California — and across the United States — which are then stored on filter paper and screened for dozens of genetic and congenital disorders, such as phenylketonuria (PKU), an inherited metabolic disorder that can result in intellectual disability, seizures, heart and behavioral problems.

Researchers at University of California San Diego School of Medicine have launched a phase II research study to look for signs of another similarly devastating disorder, one that typically does not appear in seemingly healthy children until years later: autism spectrum disorder or ASD.

The UC San Diego Newborn Screening-Autism Risk Study is designed to determine whether the dried and stored blood drops of children later diagnosed with ASD contain within them the tell-tale presence and combinations of biological molecules and environmental chemicals that might predict the risk of a future ASD diagnosis.

“We know from the history of certain genetic diseases, such as PKU, that if children can be identified before the first symptoms have appeared, then the disease can be prevented, even though the children have the DNA mutations,” said Principal Investigator Robert Naviaux, M.D., Ph.D., professor of medicine, pediatrics and pathology at UC San Diego School of Medicine. “I believe that over half of autism cases may be preventable if only we had a way to identify the children at risk before the first symptoms appear.”

Naviaux said the new study is important for two reasons: the dramatic rise in diagnosed cases of ASD and increasing evidence that early intervention in children at risk of ASD can significantly improve outcomes.

The prevalence of ASD has risen from 20 in 100,000 births in the 1970s to 1,700 in 100,000 in 2014, according to the U.S. Centers for Disease Control and Prevention — an 84-times increase. Approximately one in 59 children born in the U.S. is diagnosed with ASD. Statistics from the US Department of Education and other government agencies indicate autism diagnoses are increasing at the rate of 10 to 17 percent per year.

Changes in diagnostic criteria and reporting practices account for 60 percent of the rise, at most, according to previously published research. “This means that even by the most conservative estimates, the prevalence of ASD has increased at least 34 times,” said Naviaux. The overarching question for Naviaux and others is why? Is it genetics? The environment?

“Our genes have not changed significantly in the past 50 years,” said Naviaux. Single gene mutations play a causal role in approximately 10 percent of ASD cases. The vast majority of ASD cases are idiopathic or of unknown cause, most likely the result of a combination of genes, environmental factors or something yet to be identified.

“More than 1,000 genes can contribute to the risk and resistance a child has to ASD, but more than 95 percent of these genes are common variations also present in asymptomatic parents and children who don’t have ASD,” Naviaux said. “A clue to how the genetics of ASD is misinterpreted is the fact that many of the genes that contribute to ASD are the same genes that contribute to other disorders like schizophrenia and bipolar depression. In most cases, DNA only sets what is possible, not what is destined.”

The new phase II study will focus on exposure and possible roles of chemicals and compounds (detected in blood) and how they might interact with genes. Researchers will use a blood test developed in Naviaux’s lab to analyze the presence of more than 600 metabolites — typically small molecules produced by metabolism, the life-sustaining chemical reactions in all organisms. Metabolites from amino acids and antioxidants to vitamins and lipids serve diverse, crucial functions, including as fuel, signal carriers, structure providers, defenders and regulators among them.

Earlier research by Naviaux and others has found that persons with ASD appear to have a shared “metabolic signature.” That is, their biological chemistry is comparable, though their genetics are unique.

Testing will also look at more than 400 environmental chemicals in each dried blood drop. Exposure to these chemicals, such as commonly used pesticides, flame retardants, air pollutants, lead, mercury and polychlorinated biphenyls or PCBs, has been linked to several neurodevelopmental disorders, including ASD.

Naviaux and colleagues believe that the majority of ASD symptoms are the result of a treatable metabolic syndrome triggered by persistence activation of the cell danger response (CDR), a natural and universal cellular reaction to injury or stress. Chronic CDR, they suggest, results in disrupted and incomplete healing at the metabolic and cellular levels. In ASD, the consequence may be dysfunctional neural circuits and internal systems, producing autism’s well-documented symptoms and behaviors.

“Metabolism is the real-time result of our genes interacting with the environment,” said Naviaux. “Environmental chemical or biotoxin exposures — the ‘exposome’ — at critical developmental windows can produce delayed effects that become apparent only after months or years. By measuring metabolism and the exposome, it may be possible to identify children at risk for developing autism before the first behavioral symptoms appear.”

The study seeks 400 participants between the ages of 3 and 10 years old, meeting these requirements:

The study requires parents of participating children to answer questionnaires covering pregnancy, labor and delivery, the child’s health history and that of the family. Consented analyses will be conducted of dried blood drops recorded as part of California’s Newborn Screening program, which began in 1966 and now screens for 80 different genetic and congenital disorders. Blood spots have been saved and stored by the California Department of Public Health since 1982. No new blood tests or behavioral testing will be required for the phase II study.

Naviaux said he hopes to screen and enroll the full complement of participants by June 2020. Analyses of the identified and retrieved blood spots is expected to be complete by June 2021.

“We then hope to expand the testing program to states like New Jersey, New York, Pennsylvania and Washington by enlisting collaborators in each of those states who will be able to apply the new methods we have developed.

“Each new state has slightly different policies and regulations regarding the collection and storage of dried blood spots from universal newborn screening programs, so this medium-scale expansion study will teach us what will be needed to launch a national study.”

For more information on the study or to apply for enrollment, see the study website or contact Rachel Riggs at rriggs@health.ucsd.edu or 619-884-8021.