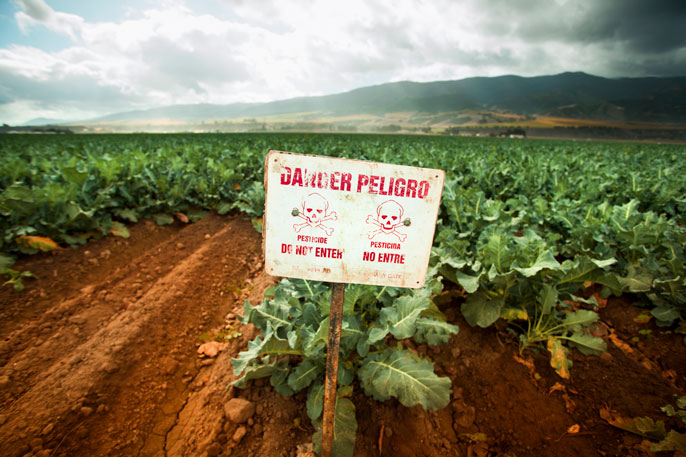 Teenagers estimated to have higher levels of prenatal exposure to organophosphate pesticides from agricultural spraying showed altered brain activity compared to their peers, a new UC Berkeley study has found.

Organophosphates are among the most commonly used classes of pesticides in the United States, despite mounting evidence linking prenatal exposure to the chemicals to poorer cognition and behavior problems in children.

A new study led by University of California, Berkeley, researchers is one of the first to use advanced brain imaging to reveal how exposure to these chemicals in the womb changes brain activity.

The study, which appeared this week in the journal Proceedings of the National Academy of Sciences, used functional near-infrared imaging (fNIRS) to monitor blood flow in the brains of 95 teenagers born and raised in California’s Salinas Valley, where agricultural spraying of pesticides is common.

Compared to their peers, teenagers estimated to have higher levels of prenatal exposure to organophosphates showed altered brain activity while performing tasks that require executive control, the study found.

“These results are compelling, because they support what we have seen with our neuropsychological testing, which is that organophosphates impact the brain,” said Sharon Sagiv, associate adjunct professor of epidemiology at UC Berkeley and lead author on the study.

The teenagers were part of the Center for the Health Assessment of Mothers and Children of Salinas (CHAMACOS), a longitudinal study examining the effects of pesticides and other environmental toxins on childhood development. The study was initiated by UC Berkeley investigators more than 20 years ago. Previous CHAMACOS work has linked prenatal organophosphate exposure with attention problems and lower IQ in children.

In the current study, the researchers used fNIRS to measure brain activation while teens ages 15 to 17 engaged in a variety of tasks requiring executive function, attention, social cognition and language comprehension.

The fNIRS technique uses infrared light to monitor blood flow in the outer regions, or cortex, of the brain. It provides similar information as functional magnetic resonance imaging (fMRI), but only requires a small cap of infrared light sources, rather than massive MRI tube, making it a more affordable and portable choice for research studies.

The researchers also used data from the California Pesticide Use Reporting program, which documents when and where agricultural pesticides are sprayed, to estimate their residential proximity to organophosphate application during pregnancy.

“With fNIRS and other neuroimaging, we are seeing more directly the potential impact of organophosphate exposure on the brain, and it may be more sensitive to neurological deficit than cognitive testing,” said Brenda Eskenazi, Professor of the Graduate School at UC Berkeley and senior author of the study.

However, similar patterns have been observed in other conditions affecting the brain, including Type 1 diabetes, Parkinson’s and Alzheimer’s, said Allan L. Reiss, the Howard C. Robbins Professor of Psychiatry and Behavioral Sciences and a professor of radiology at Stanford University and co-author of the paper.

“The brain has a remarkable ability to utilize compensatory mechanisms to counteract long-term insults,” Reiss said. “Higher activation may represent the recruitment and utilization of extra neural resources to address functional inefficiency related to a long-term insult, and lower activation, then, could be related to the eventual failure to recruit these resources after continued exposure or disease exhausts the brain’s ability to bring compensatory responses online.”

In the future, the team plans to repeat the brain imaging experiments on the more than 500 other participants in the CHAMACOS study to test if the associations hold.