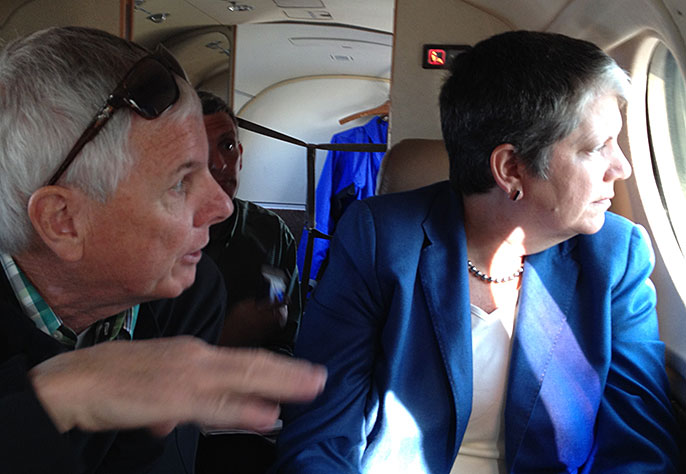 She then met with her top agricultural advisers — the President’s Advisory Commission on Agriculture and Natural Resources. They convened at the Kearney Agricultural Research and Extension Center in Parlier to discuss the impact of UC’s research in agriculture and how to engage all 10 campuses in making UC the “go-to” institution in the world for all issues related to food, including sustainability and nutrition.

“We are teaching the next generation of food scientists and we are researching how to make sure there is a sustainable food supply for the world,” Napolitano said.

Kearney, 15 miles southeast of Fresno, is one of nine research and extension centers run by UC’s Division of Agriculture and Natural Resources, serving as a base for dozens of scientists from UC Berkeley, UC Davis and UC Riverside and UC Cooperative Extension advisors and specialists. Kearney supports research on 45 crops from grapes to walnuts and studies issues from irrigation to mosquito management, with facilities including greenhouses, insectaries and postharvest labs, Director Jeff Dahlberg said.

UC Cooperative Extension advisors and specialists are “a very integral part of our farming,” said Don Bransford, a rice, prune and almond grower who chairs the President’s Advisory Commission on Agriculture and Natural Resources.

“I know who my advisor is — they’re the experts,” he said.

A field tour highlighted two crops in which UC has played a pivotal role: blueberries and pistachios.

Twenty years ago, few blueberries were grown in California. Blueberries were considered a cool-weather crop, but UC Cooperative Extension advisor Manuel Jimenez had a hunch they could grow here. He tested different varieties and found that blueberries could thrive by acidifying the soils and maintaining acidic conditions in the irrigation water. California is now one of the leading producers of fresh blueberries, with growing concentrated in the Central Valley.

Pistachios have become an increasingly important crop, valued above $1 billion a year. The United States is the world’s leading pistachio producer, and 99 percent of the country’s crop comes from California. Half of all pistachios in California are grown on rootstock taken from the mother pistachio tree at Kearney, said UC Cooperative Extension specialist Louise Ferguson.

UC research has helped ensure the safety of pistachios through biological controls, said Themis Michailides, a UC Davis plant pathologist based at Kearney.

Napolitano noted that she made the ANR vice president a direct report to her because agricultural issues matter to California and the world.

Those issues include the drought. UC is putting its expertise to work, hosting 35 drought workshops in the past two months alone for farmers, ranchers and homeowners, said Doug Parker, director of UC ANR’s California Institute for Water Resources, who served as a tour guide for the president.

UC researchers have come up with recommendations to help farmers minimize water use while maximizing production, said UC Cooperative Extension advisor Roger Duncan. Still, it’s estimated that up to 10 percent of California’s farmland could be fallowed, primarily in the San Joaquin Valley.

The daylong briefing reinforced how UC is at the forefront of issues facing California agriculture, said Barbara Allen-Diaz, UC vice president for ANR.

“It’s great to see the incredible depth and breadth of California agriculture, and show the link between UC research and extension and the development of agriculture in the state,” Allen-Diaz said.