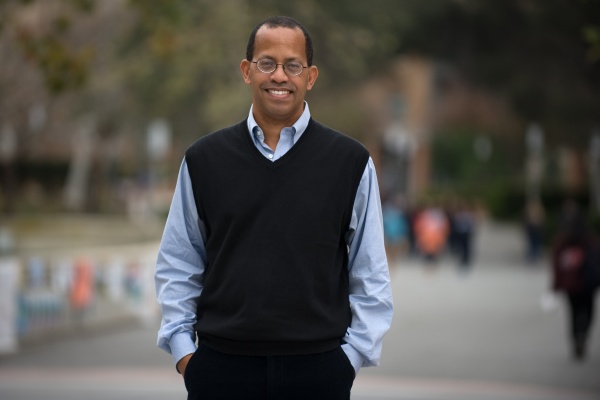 'The show is a powerful vehicle for information about the cultural and political climate in Europe during the early 20th century,' Douglas Haynes says of 'Downton Abbey.'

The spirit of post-Edwardian England permeated the Costa Mesa studios of PBS SoCal one recent morning as Douglas Haynes joined presenter Patt Morrison in a discussion of all things “Downton Abbey.” The network’s weekly arts program, LAaRT, examined the hit television series’s historical parallels and cultural relevance with the assistance of Haynes, a UC Irvine associate professor of history and an expert on modern Britain.

“The show is a powerful vehicle for information about the cultural and political climate in Europe during the early 20th century,” he says. “British period dramas such as ‘Downton Abbey’ and ‘Masterpiece Theatre’ help build bridges of understanding between the United States and the U.K.”

Haynes grew up in the San Francisco Bay Area, and his early exposure to public television inspired his interest in what would ultimately become his key research focus. He has taught British history for more than 10 years and published numerous works on the history of British imperial medicine and race relations in early modern Britain. At UC Irvine, Haynes is also associate vice provost for equity & diversity and director of UCI Advance, a program that promotes gender equity and diversity in faculty hiring.

Under his leadership, in fact, UCI Advance received a 2013 institutional Equity Award from the American Historical Association. The prize recognizes academic units that have achieved excellence in recruiting and retaining members of underrepresented racial and ethnic groups in the field of history. Haynes accepted the award at a Jan. 2 ceremony in Washington, D.C.

“UC Irvine is the top-ranked university in the country under 50 years old, and as such we’re young enough to be able to be creative in our pursuit of diversity and academic excellence,” Haynes says. “We are working to create a climate in which we’re able to attract and keep the very best people and remove the barriers and hurdles that present themselves to highly qualified graduates.”

The campus is a national leader in its efforts to recruit and retain talented faculty. Family-friendly policies such as the Career Partners Program and the Dependent Care Travel Awards, for example, help faculty balance professional and domestic responsibilities.

The UC Irvine community is enriched, Haynes notes, when diverse groups gain access, whether as students, faculty or staff.

“Whoever you are — DREAMer, LGBT, a military veteran, first-generation or low-income student — UCI is a gateway for you to be the best,” he says. “We simply can’t afford to deny promising individuals a chance to achieve great things.”

Of course, equity and diversity were antithetical to the British upper class depicted in “Downton Abbey,” but Haynes has found that the series — of which he’s an avid viewer — has broadened interest among UC Irvine undergraduates in the history of England.

“I’m currently modifying my modern Britain course to incorporate ‘Downton Abbey’ segments that illustrate the experience of the Edwardian era,” he says.

Haynes relates that his children’s enjoyment of a recent London vacation was greatly enhanced by both studying British literature and watching “Masterpiece Theatre” and “Downton Abbey.”

“Travel allows you to make connections between cultures and also understand different points of view,” Haynes says. And occasionally, the same can be said of television.