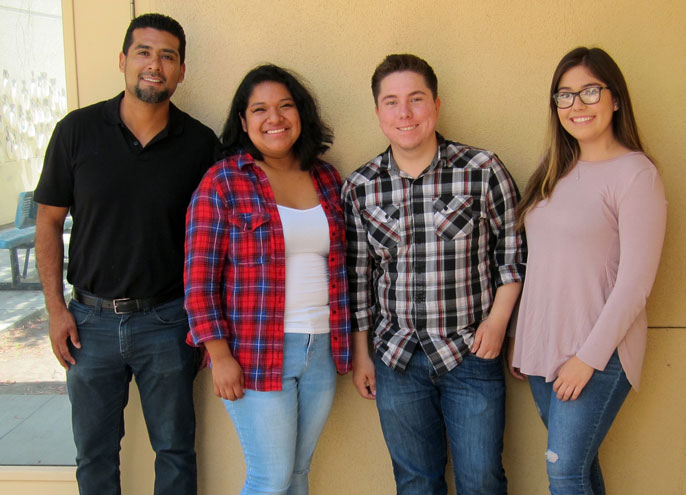 When UC Santa Barbara professor of sociology Victor Rios was in the eighth grade, he temporarily abandoned his education. Each morning, he would sling his backpack over his shoulders, wave goodbye to his mother and head to his Oakland-area middle school — or so she thought.

Instead, Rios ditched classes, using that time to make extra money — $10 per day — pushing a lawnmower. He explains it simply: “I decided I didn’t want to be poor anymore.”

While on the job, Rios had another epiphany: Not only did he not want to be poor, he wanted to be the owner of a beautiful home like those whose yards he tended — not the person cutting the grass.

At the same time, however, he suspected that achieving that dream would require more than a seventh-grade education.

Despite facing tumultuous teenage years fraught with violence and multiple run-ins with the law, Rios eventually graduated high school and college, and went on to earn his Ph.D. Now, he has pioneered a weeklong summer program for students like him, who are often called “at-risk youth.” Rios prefers to call them “the at-promise population,” because, he contends, they have tremendous untapped potential.

The program, created in partnership with Oxnard’s Rio School District and partially funded by an anonymous donor who grew up with field worker parents, focuses on 13- and 14-year-olds. It had its inaugural session in early July.

Rios explained the impetus for the summer session by pointing to the starkly different experience of his own daughters. “In the summer, I send my kids to camps and community college classes,” he said. “In the middle class, you have this structure; but for these kids, there aren’t many opportunities for those experiences.”

And since they can’t go to camp, Rios brings the camp to them.

Rios is one of the foremost experts on the role that social and cultural forces play in shaping the lives of young people in urban areas. He has published extensively on the subject, and has given a TED Talk titled, “Help for the Kids the Education System Ignores.”

Rios understands the topic so well in part because he was a kid the system ignored. And in return he ignored the system, choosing to sneak off to a job rather than stay in school. He recalled that time in his life as especially challenging. “When I was 14, I would look in the mirror and see the ugliest person I had ever seen,” he said.

Today Rios considers himself lucky, because he had a teacher who changed his life through sheer perseverance. Believing that he was smart and full of potential, even though he was undoubtedly lost, Rios said, that teacher encouraged him to pursue his education and to consider his future. Now, he tries to pay that unwavering support forward, by giving back to students growing up in similar circumstances.

A circle of trust

Rios begins the camp by telling his own life story in great detail, hoping it will inspire the young students to share their own personal narratives later in the program. “It’s important to model that,” he explained, “because they’re not used to talking to anyone about their experience. They’re not used to having a circle of trust, but in this context, they’re expected to trust each other and to hear each other.”

For many of the students, the elements of Rios’ story are familiar. They have known similar struggles and are wading through an especially tricky time in life — not quite autonomous adults, but transitioning out of childhood and into high school, where major decisions about relationships and social circles are made.

To help prepare them for what lies ahead, the program focuses on self-expression and teambuilding, but also on practical skills like college preparation and future financial planning. Rios explains to them that while it is valuable to dream big and work hard, it is equally important to work smart.

He asks the kids to picture their futures, and then has them put real numbers to their desired lives. If a student says she wants to own a home — how much would the mortgage be? If another says he dreams of having a family — how much would he need to make each year to support his children? It’s not something many 13-year-olds have often considered, and it spurs them to think about the necessity of continuing their educations.

Rios’ insistence on detailed and practical vision plans goes back to his own experience mowing lawns, and is backed up by his research into inequality. “The middle class gives all of these preparations and creates conditions that sets students up for success,” he explained, “whereas the working class often gets left behind.”

For this particular program, Rios has enlisted the help of three UCSB student assistants, who are gaining valuable research experience while also acting as older, wiser examples for the teenagers. One assistant, Christina Gutierrez, said she sees parallels between her own high school years and those of the young Oxnard students.

Gutierrez’s parents emigrated from Mexico before she was born, and sacrificed their own educations to seek a more comfortable and prosperous life. Though she was a dedicated student, Gutierrez said she often struggled to make sense of the complexities of U.S. higher education. When it came time to apply for college, she did so largely without any guidance.

“I see myself in these kids because they are lost in a sense,” she commented. “They haven’t figured out exactly who they are. Part of the goal of this program is to open them up to the possibilities of what they could do in the future.”

Though Rios repeatedly tells the 10 young students that he’s running this program because he wants to be there and not because anyone is in trouble or being punished, a young girl interrupts him to ask if he has copies of their academic records.

“No. Why?” asks Rios. “Should I be looking at your records?”

“Because we’re all bad kids,” the girl replies, matter-of-factly.

Rios grows serious as he addresses the class: “No, you’re not. You are good kids who have made bad choices. Don’t ever believe that you’re a bad kid.”

This is the crux of the work he does in the summer program: getting young people who have the odds stacked against them to change the way they look at themselves, in the hope that it might alter their future choices.

“It’s a healing model,” Rios explained. “The way you heal that part of the soul that has trauma or is feeling resentful is you have a conversation with others about what you have been through and you speak to your resilience overcoming those adversities.”

For both Rios and Gutierrez, higher education was a promised land that delivered. They hope to encourage more kids to consider college a viable — and even necessary — option, and to make sure that there are programs in place to help bridge the social and educational gap for young adults who come from non-traditional backgrounds.

This particular program also serves as a testing ground for something bigger. Rios hopes to create a curriculum that could be used in schools across the nation to help foster self-confidence and trust in those “good kids who have made bad choices.”

Though he has dedicated his professional career to understanding how and why these students get lost in the system, Rios also wants to make sure that fewer of them do. “I got tired of telling people about the problem,” he explained, “and now I want to help fix it.”