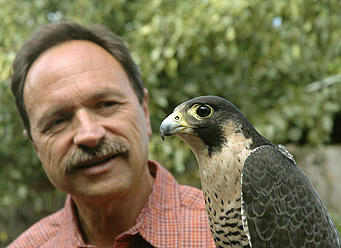 An auditorium full of giddy 12-year-olds is a rowdy crowd, but when Glenn Stewart walks in, the room falls silent. Having a peregrine falcon perched on your arm has that effect on people.

"I don’t know many people who can keep 300 seventh graders quiet," Stewart said. "I bring a falcon ….They’re riveted by it."

Stewart estimated he’s spoken to 60,000 students during the past 10 years through the education program of the Santa Cruz Predatory Bird Research Group, which is part of UC Santa Cruz’s Institute of Marine Sciences.

"I had a student at UCSC last year, and she says she got interested in science 'when this guy came to my biology class when I was a (high school) freshman with a falcon,' " Stewart said. "I told her, 'Well, that was me.' She didn’t remember me, but she remembered the falcon."

The Predatory Bird Research Group formed in the early 1970s under the leadership of the late UC Santa Cruz Natural History Professor Emeritus Ken Norris, Santa Cruz veterinarian Jim Roush and Brian Walton, the group’s first coordinator. The organization worked with eagles, falcons and hawks but is best known for leading the effort to bring the peregrine falcon back from the brink of extinction.

Stewart graduated from UC Santa Cruz in 1973 with a degree in politics. He learned about the bird research group in a UC Santa Cruz alumni magazine article in 1976 and had an epiphany: "I need to go back to school and do this."

He began volunteering for the group, re-enrolled at UC Santa Cruz in 1977 and earned a degree in environmental studies.

Over the years, Stewart has held various roles at the Predatory Bird Research Group and other environmental organizations. He was executive director of the Idaho Conservation League from 1990 through 1995 before returning to Santa Cruz to develop the bird research group’s education program. He took charge of the group as coordinator in 2007 after Walton died.

In Idaho, Stewart tackled environmental issues such as mining, logging and over-grazing of public lands. He came to the conclusion that public education plays an important role in any conservation effort.

"It was almost regarded as a right (in Idaho) to take natural resources without any real regard to the future," Stewart said. "That was in the background when I came back to Santa Cruz and saw the opportunity to do more public education."

DDT, a pesticide widely used before being banned in the United States in 1972, is the culprit for the near extinction of peregrines and other predatory birds. DDT worked its way up the food chain to predators, and the toxin built up in the fatty tissues of falcons, eagles and hawks. DDT blocked the development of eggs, leading to thin shells that broke easily and the premature deaths of chicks. Populations of falcons, eagles and hawks collapsed.

"The status of the peregrine falcon says something about the health of the environment," Stewart said. "It’s a top-of-the-food-chain bird. They reflect what’s going on out in nature."

Peregrines were near extinction when the Predatory Bird Research Group began its work: There were just two known pairs of nesting peregrines in California. Today, it’s estimated there are more than 250 pairs in the state. Peregrines were taken off the federal endangered species list in 1999, though DDT remains in the environment and still affects birds.

With the peregrines recovering, the focus of Predatory Bird Research Group is shifting to sustaining them, and public education is a big part of the effort. In the late 1980s, peregrine falcon nests started appearing on buildings in the San Francisco Bay Area. The group started making observations, and Web cams were directed at nests on Oracle headquarters in Redwood Shores, the PG&E building in San Francisco and City Hall in San Jose.

Oracle, PG&E and the city of San Jose have partnered with the research group to maintain the Web cams. A network of volunteers watches over the nests during hatching and fledging season, when 6-week-old chicks attempt their first flights.

Young falcons take their initial flights from the building-top nests and sometimes land on the ground. They’re not strong enough to lift off and will stay where they have landed, which is usually the street or sidewalk. Trained volunteers monitoring the nests will corral the falcon and box it up to be taken back to the nest.

The presence of urban falcons has aroused public interest in conservation and environmentalism. Hundreds have volunteered to be falcon monitors, and people from around the world view the Web cams.

For Ann Greiner, volunteering as a San Francisco nest monitor has made her realize how important it is for humans to share the planet with other species.

"It’s given me an opportunity to help that happen in an urban environment," she said.

The peregrine falcon is an "amazing success story and there’s something very compelling about that," said Greiner, who’s been on fledge watch and moderates the San Francisco nest’s Internet message group. "I like to see a success story. We don’t seem to have many as human beings when it comes to conservation."

Tina Ferrigno, who moderates the San Jose nest’s message group, said working with peregrines has given her an appreciation for how much individuals can achieve.

"If you get enough people together, you can effect some change. It starts with one," Ferrigno said. "You really can pull together an effective program and potentially help the birds or whatever it is you’re trying to help."

Viewers from 38 U.S. states and 21 countries looked at the San Jose nest Web cam in 2008, and people have come to see the nests in person from across the country and Europe, according to Evet Loewen, who’s helped coordinate the City Hall volunteer falcon watchers. (San Jose nest discussion group) (Oracle nest discussion group)
"This has gone far beyond anything I could have imagined," Loewen said. "I knew it would be a good thing locally. I didn’t understand that it would expand far beyond that."

Stewart said that for years, it was only researchers who had an interest in doing things like observing bird nests.

"Now everyone gets a thrill out of it. Even a construction worker at San Jose City Hall whom Stewart heard say,  "It doesn’t get any better than this!"