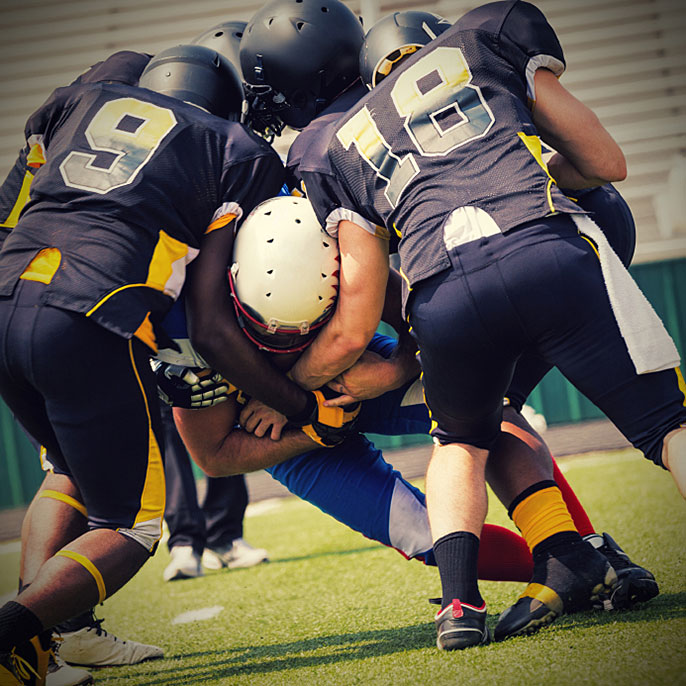 “Welcome to the future of high school football,” Terry O’Neil said as he greeted nearly 90 coaches, physicians, sports advocates and parents who came to Carnesale Commons July 8 to learn about what they can do to help players reduce the risk of concussion.

The diverse group gathered to learn about football techniques that would be legal under a bill authored by Assemblyman Ken Cooley aimed at preventing concussions in high school football players by reducing high-impact contact during field practice.

The event was cosponsored by the UCLA Steve Tisch BrainSPORT Program, Cooley and O’Neil’s organization, Practice Like Pros, a nonprofit that’s educating college and high school coaches about the benefits of adopting professional teams’ approaches to reserving full-contact for game day.

“Two-thirds to three-quarters of all concussions happen during practice with a player’s own team mates, not during games,” explained speaker Dr. Christopher Giza, director of the BrainSPORT program and a professor of neurosurgery and pediatric neurology at the David Geffen School of Medicine at UCLA and Mattel Children's Hospital. “We need to teach new techniques that don’t use the head as a weapon and customize helmets for smaller athletes to help kids safely play the sports they enjoy.”

'I got hit every day'

Patrick Larimore understands the issue intimately.  UCLA’s former football team captain and defensive MVP in 2011, he suffered six concussions during his career, along with depression, disrupted sleep and painful headaches, before making the agonizing decision to shelve his National Football League dreams and leave football in 2012.

“Playing linebacker, I got hit every day,” recalled Larimore. “Every time you suffer a concussion, it increases the risk of suffering another. I’m an example of that. I owe it to the young kids playing now to spread the word about the dangers of traumatic brain injury.”

'We want them to live healthy lives with productive futures'

According to Moon, athletes’ glory days shouldn’t end in high school. “We want kids to move onto the next level of football, be it college or pro. We want them to live healthy lives with productive futures.”

“I’ve seen colleagues suffer from Alzheimer’s, Parkinson’s, dementia and short-term memory loss,” Moon added. “I never know when these symptoms might creep into my life. I’m watching myself for those signs all the time.”

Cooley summed up the mission behind the legislation.

“The real purpose of AB 2127 is to deal with the impact of adverse concussion news in the brains of parents who love their kids,” said Cooley, “so they are looking at their baby boy and worrying about, 'What will happen if my son wants to play football?'”

Assembly Bill 2127 has passed the State Assembly and Senate and now awaits Gov. Jerry Brown's signature. If it is approved, California would become the 16th state in the past 16 months to limit full-contact practice in high school.