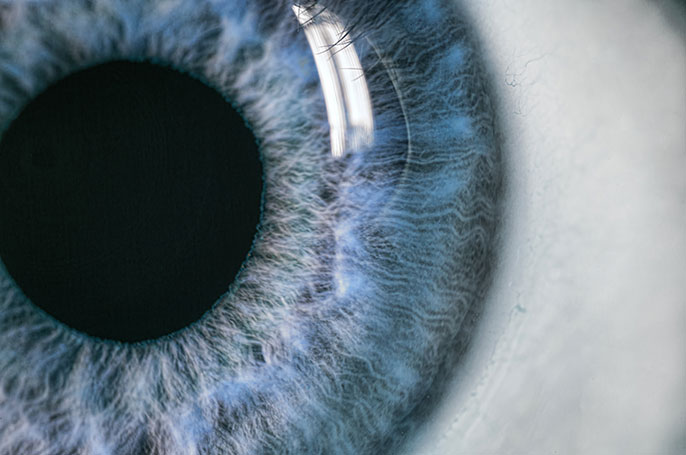 When University of California, Irvine neurobiologist Carey Y.L. Huh, Ph.D., set her sights on discovering more about amblyopia, she brought personal insight to her quest. As a child, Huh was diagnosed with the condition, which is often called “lazy eye.”

Huh is a researcher in the lab of UC Irvine associate professor of neurobiology & behavior Sunil Gandhi. She and her colleagues have just found that amblyopia originates in an earlier stage of the visual pathway than was previously thought. Their research, which raises the possibility of new treatment approaches, appears in the Journal of Neuroscience.

For those with amblyopia, vision in one eye is much poorer than the other, interfering with how their brains and eyes work together to produce what they see. One of amblyopia’s hallmarks is difficulty with three-dimension perception, which necessitates use of both eyes. Many of the estimated two to five percent of people globally with amblyopia lack this ability known as binocular vision. Amblyopia begins in childhood and accounts for most visits by youngsters to vision professionals.

Traditionally, scientists have thought amblyopia starts in the brain’s visual cortex. Using two-photon calcium imaging, an advanced technique that displays cerebral activity in real time, Huh and her colleagues investigated this accepted belief in rodent models. Their research revealed amblyopia’s impact on binocular vision actually originates in the thalamus, which serves as the information relay station between the eyes and the visual cortex. They did, however, find that the visual cortex does serve a role in amblyopia by affecting the ability to see fine detail.

To treat amblyopia, a patch, either in physical form or pharmaceutically, is placed over the better eye to force the brain to learn how to use the weaker one. Without this process, the brain could lose its ability to utilize the latter.

“However, our findings indicate amblyopia treatment may need to be revised,” said Huh, the article’s first author. “The traditional treatment of patching the good eye may need to be supplemented with newer methods such as binocular training, to preserve and improve 3-D vision as much as possible.”

Amblyopia can result from childhood strabismus, a condition in which the eyes are misaligned. Other principal causes of amblyopia include childhood cataracts and severe refraction differences between eyes that are left uncorrected in youngsters. It is important to have children’s eyes examined early so the underlying problems can be properly treated.

With the colloquial name “lazy eye,” it may be easy to overlook the impact of amblyopia, Huh said. “It is a significant condition that prevents people from enjoying full visual capacity and can keep them from entering certain professions,” she said. “And the vision degeneration that can come with aging could raise special concerns for those with amblyopia.”