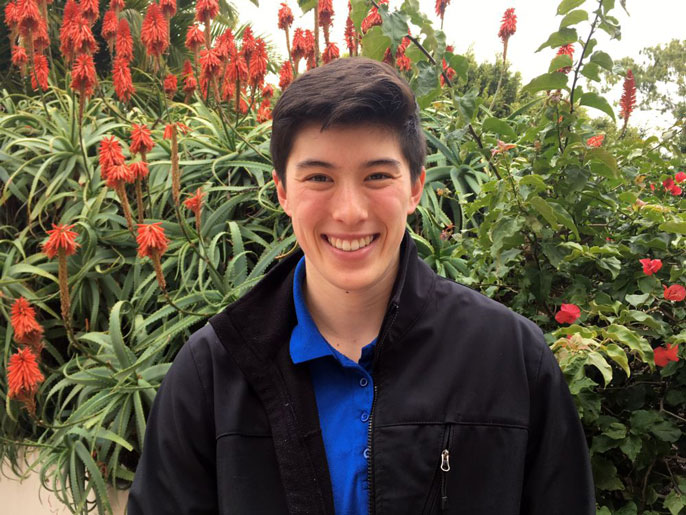 Sara Cratsenburg is a senior feminist studies major at UC Santa Barbara. In six months she’ll be a second lieutenant in the U.S. Army. In a combat role. And it will be the fulfillment of a dream.

Fair or not, feminist scholarship isn’t usually associated with combat. But Cratsenburg is no ordinary student. As cadet battalion commander of UC Santa Barbara’s Reserve Officer Training Corps (ROTC) program, she leads the campus’s Surfrider Battalion. And as the battalion’s No. 1 cadet this academic year, she got to choose her Army assignment. Field Artillery, here she comes.

“I knew I wanted combat,” Cratsenburg said. “That was something I always wanted to do within the military. I figured if I wanted to sit at a desk somewhere I would just have a civilian career. It’s go big or go home with me.”

The first feminist studies major to serve as cadet battalion commander of the Surfrider Battalion, Cratsenburg discovered field artillery in the summer of 2016 while participating in Cadet Troop Leader Training, which gives cadets the opportunity to experience real Army life. She shadowed a female active duty lieutenant and did field and physical training.

Lt. Col. Travis Rayfield, professor and chair of UC Santa Barbara’s Department of Military Science, has no doubt his top cadet will do just that. “Cadet Cratsenburg is an absolutely outstanding individual. She represents the best of UC Santa Barbara — she is smart, determined, compassionate and driven. Her peers look up to her, and she has the unique ability to defuse a situation. Additionally, she builds her peers up to a higher standard.”

After graduating in June, Cratsenburg will attend Basic Officers Leaders Course at Ft. Sill, Okla. “That’s where I learn the ins and outs of actual field artillery,” she explained. “Here I learned the skills of what it takes to be an officer and then there I’ll be learning my actual job. It’s going to be like going to college all over again.”

Once done with training she’ll get her first duty assignment. Graduates get to request postings, and Cratsenburg is aiming high. “Right now I have the 101st and 82nd Airborne,” she said of her top picks. “I hate being told I can’t do things, so I’m just going to go for it.”

Cratsenburg chose UC Santa Barbara over a number of schools, including UCLA, that offered her an athletic scholarship as a rower. After rowing for a year for the Gauchos, she discovered ROTC and committed herself to the program.

“We really are lucky,” she said. “We have the best program on the West Coast, and I’m not afraid to say that at all. I think what makes us standout is our professionalism. We are truly trying to put people into the Army that we know will make the Army better. Same with society. We don’t want people to come out of this program any worse off. We want to make sure they’re better in their civilian careers and life.”

Looking ahead, Cratsenburg plans to make a career of the Army, which opened most combat roles to women in 2015. It was a big step forward for the service, long a bastion of machismo. For a feminist like her, “It’s a very interesting juxtaposition,” she said. “Especially in this exciting time, when combat roles are being opened to women, it’s really exciting to say, ‘I’m a feminist studies major, I’m a feminist and I am one of the first women from this school to go to combat arms.’ The Army is one of those places where culturally it’s not going to change unless you have people in it who want to change it. And if I possess the skill set that I’ve learned from my academic discipline here at UC Santa Barbara, hopefully that’ll help me in my career.”