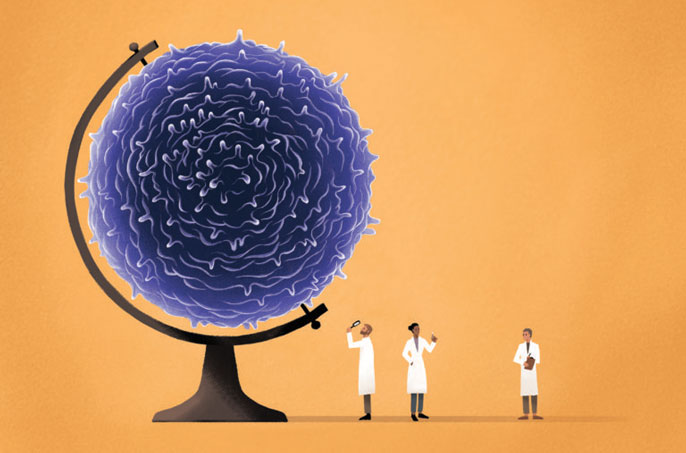 With several large grants, UC Irvine researchers are exploring promising theories on how cancers develop and how to treat them.

More than a decade ago, UC Irvine biology professor Arthur Lander, broadened the focus of his research.

Instead of studying a particular biological molecule or specific cell type, he reasoned that biomedical researchers would learn more, at a faster pace, if they explored biological systems — how networks of molecules, cells, tissues, organs and environments work in concert.

Today that novel idea has helped vault UC Irvine into the upper echelons of cancer research in the United States.

Lander, the Donald Bren Professor of developmental & cell biology, is part of a group of UC Irvine scientists who have been awarded a $10-million, five-year grant from the National Institutes of Health for several groundbreaking cancer research projects centered in the field of systems biology.

“Arthur was very forward-thinking about this, recognizing years ago that systems biology would grow into a discipline and catch the attention of the NIH,” says Marian L. Waterman, professor of microbiology and molecular genetics, director of the UC Irvine Cancer Research Institute and a leader of the systems biology team.

“It was Arthur who brought us all together. Earning this grant has been our goal for about three years.”

These collegial researchers from vastly different fields — math, biology and genetics — are dedicated to pooling their training, resources and experience to solve some of the most complex mysteries of cancer.

“We worked so hard to get this grant,” Waterman says, noting that the trio labored over the application for months, often pulling all-nighters. “It’s the product of our high-quality cancer research and the very strong program in systems biology we’ve had for years at UC Irvine. The NIH recognized that and rewarded it.”

It’s not the only national validation of UC Irvine’s cancer research efforts in the past year. Several other scientists have garnered prestigious grants or funding for innovative studies that promise to reveal some of the complexities of cancer and unleash new strategies for prevention and treatment.

Science across the spectrum

Research is at the core of the UC Irvine Chao Family Comprehensive Cancer Center and its designation by the National Cancer Institute as a comprehensive cancer center, says Dr. Richard A. Van Etten, the center’s director and a professor of hematology/oncology at the UC Irvine School of Medicine.

The NCI designation means the cancer center must conduct research across the spectrum, from basic and translational studies to clinical trials, as well as meet the highest standards for patient care and educate the next generation of cancer health professionals.

The cancer center has the added benefit of partnering with colleagues on the UC Irvine campus to bring every scientific weapon to bear in the fight against cancer. With this award, UC Irvine joins 12 other U.S. research institutions that are part of the NCI’s prestigious Cancer Systems Biology Consortium.

“UC Irvine Health is positioned to do all of this novel research because we are embedded within a great research university,” Van Etten says. “Other hospitals that lack a university can do research. But we have the complete infrastructure to do this type of systems biology work.”

Understanding the complexities of cancer

Systems biology is the study of complex biological environments. In cancer, that means looking beyond cancer cells and exploring the environment they live in and the forces that shape them. By studying the big picture, scientists hope to better understand cancer. Systems biology calls upon the diverse skills of many: mathematicians, computer scientists, engineers, chemists, geneticists and others.

“In the past when we’ve tried out different drugs or different ideas, we tended to have a simplified idea of the cancer cells. And then, during clinical trials, the idea fails,” Waterman says.

“The reason it fails is that the tumor and the environment surrounding it is much more dynamic and complex than our models of cancer cells growing in a dish. What we study (in systems biology) is more accurate.”

The UC Irvine team even includes an ecologist whose expertise is tide pools because he brings unique skills in the study of complex environments that contain a diversity of organisms.

UC Irvine is well known for its collaborative environment, Waterman notes. “There is a culture here to be interdisciplinary.”

Orange County residents and those from surrounding regions have been enlisted in this cause by participating in and raising funds for the UC Irvine Anti-Cancer Challenge — an annual run, walk and cycling event. The 2018 event raised over $400,000 to fund 13 pilot projects. The 2019 UC Irvine Anti-Cancer Challenge will be held on June 8, 2019 at Aldrich Park on the UC Irvine campus in Irvine.

“These are high-risk, high-payoff studies that come out of our laboratories,” Van Etten says. “These Anti-Cancer Challenge seed grants are designed to help an investigator provide critical preliminary data that will allow them to compete for extramural grants from the NIH and other foundations.”

The NCI grant will fund studies on a new class of cancer-killing immunotherapy drugs with the potential to revolutionize cancer treatment by creating one approach that can work on many types of cancers.

“We saw his data and said, ‘Wow, this is something we want to support,’” Van Etten says of the Demetriou project, which was funded initially by proceeds from the 2017 UC Irvine Anti-Cancer Challenge. “It’s a new approach to immunotherapy that has come entirely out of UC Irvine.”

Immunotherapies harness the body’s immune system to fight cancer, but they haven’t been effective on all types of cancers. Demetriou and his post-doctoral fellow, Raymond Zhou, PhD, are working on a new type of immunotherapy that may have broad success against many different cancers.

They created a technology called Glycan dependent T cell Recruiter (GlyTR — pronounced ‘glitter’). The therapy is based on the fact that almost all proteins on the surface of cancer cells carry complex sugars called glycans, which are not found in normal cells.

In the past, researchers have had trouble making use of cancer-specific glycans to target and destroy tumors because it’s difficult to attach antibodies — substances that recognize the cancer cell — to glycans.

But Demetriou and Zhou have developed a clever way around that problem by engineering an artificial protein, called a bispecific protein. The protein is “antibody independent,” and because it recognizes a common cancer glycan, it can work on different types of cancers.

“I think immunotherapy is the wave of the future for cancer treatment,” Demetriou says. “The impact of this grant is enormous. We’ve been working on this since 2015, but on a shoestring. This grant takes it to a whole different level.”

Demetriou hopes to see their research move into clinical trials in a few years.

From lab to bedside

Impacting the lives of cancer patients as quickly as possible is also the goal of Dr. Daniela Bota, a UC Irvine Health neuro-oncologist and internationally recognized expert on brain cancer. Bota was recently named chief U.S. investigator on an international clinical trial testing a new drug, a proteasome inhibitor called marizomib, for glioblastoma — the most deadly type of brain cancer.

The test will combine marizomib with the standard treatment for glioblastoma, temozolomide chemotherapy and radiation therapy.

Bota was among the first in the world to begin studying marizomib, and much of the initial work clarifying its potential for glioblastoma took place in her lab. Her early research showed the compound could not only cross the blood-brain barrier, but also is not toxic to patients.

“Celgene, the company that has ownership of this drug, is sponsoring the Phase 3 clinical trial, and UC Irvine will be the main U.S. center,” Bota says. “The reason we do this work here is we want our patients to have access to treatment that is only available at academic cancer centers like ours.”

UC Irvine cancer researchers universally praise Southern California residents who have participated in the Anti-Cancer Challenge or who enroll in clinical trials as partners in elevating cancer research at UC Irvine Health.

“Patients cannot be guaranteed benefit in clinical trials,” Van Etten says. “However, very frequently we already know that a new treatment is beneficial versus the standard treatment. We wouldn’t offer it otherwise.

“But patients understand that when they participate in a trial, it’s for the greater good — to help move the field forward. That’s what we’re all trying to do.”