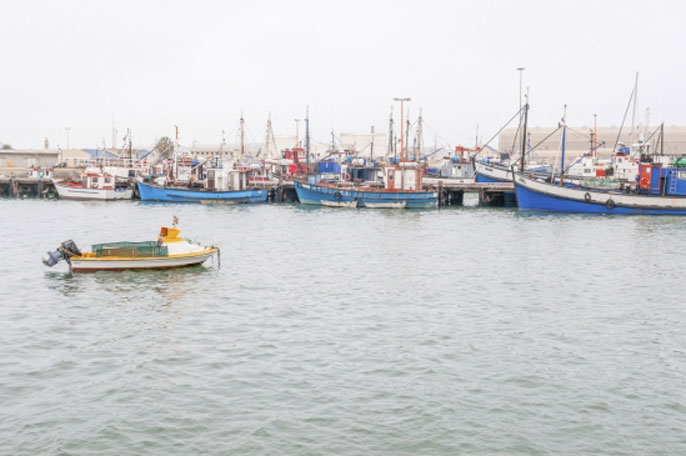 Fishing boats at the harbor in Luderitz, Namibia. The small town is known for its crayfish industry.

New groundbreaking research shows that with improved fishing approaches — compared to business as usual — the majority of the world’s wild fisheries could be at healthy levels in just 10 years and global fish populations could double by 2050.

The study conducted by researchers from UC Santa Barbara, the University of Washington and the Environmental Defense Fund appears in the Proceedings of the National Academy of Sciences.

“This research shows that we really can have our fish and eat them, too,” said lead author Christopher Costello, a professor of environmental and resource economics at UC Santa Barbara’s Bren School of Environmental Science & Management. “We no longer need to see ocean fisheries as a series of trade-offs. In fact, we show that we can have more fish in the water, more food on the plate and more prosperous fishing communities — and it can happen relatively quickly.”

The paper demonstrates that by 2050, applying the same improved fishing approaches could increase profits from the world’s ocean fisheries by 204 percent versus what can be expected under a business-as-usual approach. The increased harvest would be enough to provide a significant source of protein for an additional 500 million people. In the coming decades, with a projected 9.5 billion people competing for more food from maxed-out resources, finding sustainable ways to increase food production has become a critical challenge, Costello noted.

Calculations performed by the investigators showed that if reforms were implemented today, three-quarters of exploited fisheries worldwide could attain population goals within 10 years — and 98 percent by mid-century. The team used a massive database of 4,713 fisheries representing 78 percent of the ocean’s catch. This enabled a far more precise and more granular analysis than ever before.

“We’ve uncovered a really important insight: There is urgency and a tremendous upside in reforming thousands of small-scale, community fisheries around the world,” said co-author Ray Hilborn, a professor of marine biology and fisheries science at the University of Washington. “The research adds to the body of work showing that most of the world’s large fisheries are doing relatively well, but it emphasizes the critical need to rebuild local fisheries, most of which are in the developing world where millions depend on fisheries for food and their livelihoods.”

A clear roadmap for recovering fisheries

The analysis suggests that implementing reforms such as those based on secure fishing rights are critical to providing the combined benefits of increased fish populations, food production and profits. “Fishing rights” is a fishery management approach that ends the desperate race to fish by asking fishers to adhere to strict, science-based catch limits in exchange for a right to a share of the catch or to a traditional fishing area.

.“We now have a clear roadmap for how to recover fisheries: Give fishermen secure fishing rights so they can control and protect their future,” said co-author Amanda Leland, senior vice president for oceans at the Environmental Defense Fund. “Countries from the U.S. to Belize to Namibia are leading a turnaround by implementing secure fishing rights and realizing benefits for people and the oceans.”

Since 2000, overfishing in U.S. federal waters has dropped by 70 percent as the number of species managed with fishing rights or “catch shares” has quadrupled. In the past three years, fishing industry jobs have increased 31 percent and fishing revenues have grown by 44 percent. In Belize, a fishing-rights program newly implemented by the government for small-scale fishermen has dramatically increased compliance and shows tremendous potential for recovering important local species.

“Our research reveals a stark choice: Either manage fisheries sustainably and realize the tremendous potential of the world’s oceans, or allow the status quo to continue to draw down the natural capital of our oceans,” said Costello.