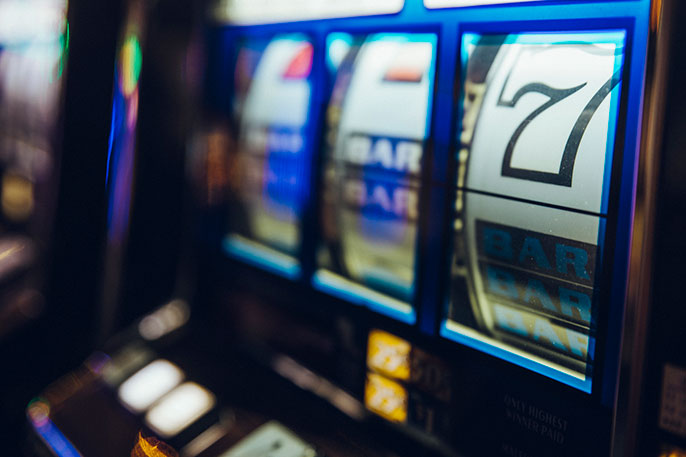 Gamblers find themselves replaying past wagers, regardless of the outcome, a new study finds.

Try the simulation yourself here:
http://neuroecon.berkeley.edu/public/code/gambling_demo.html

What goes through a gambler’s mind after she’s placed her bet?

It’s not just the anticipation of a big payoff, or doubts about the wisdom of her bet. It’s also regret about previous bets, both won and lost, according to UC Berkeley neuroscientists.

“Right after making a choice and right before finding out about the outcome, the brain is replaying and revisiting nearly every feature of what happened during the previous decision,” said senior author Ming Hsu, an associate professor in the Haas School of Business and Helen Wills Neuroscience Institute at UC Berkeley. “Instead of ‘I just gambled but maybe I shouldn’t have,’ it is, ‘Last round I gambled and that was a really good choice.’ Or, ‘I played it safe last time but should have gone for it.’”

The UC Berkeley study is one of a small but growing number of studies that record fast human brain activity — a thousand measurements per second — to reveal the complex array of operations underlying every decision we make, even those that may seem trivial.

The researchers focused on the brain’s orbitofrontal cortex, long-known to be involved in reward processing and social interactions. Indeed, it was one of the main sites of damage in the well-known case involving 19th century railroad worker Phineas Gage, whose left frontal cortex was destroyed after an explosion drove an iron bar through his head. The damage altered his personality, making him impulsive and uninhibited — seemingly a man who didn’t regret any act, no matter how disastrous the outcome.

In recent decades, the orbitofrontal cortex has been shown to be involved in how people value their choice options, how much regret they felt, how much risk they were taking and how valuable their choice was, all of which guide future choices or help someone appraise how good or bad the outcome was.

“It turns out that the most prevalent information encoded in the orbitofrontal cortex was the regret subjects experienced from their previous decision,” said first author Ignacio Saez, a former UC Berkeley postdoctoral fellow who is now an assistant professor at UC Davis.

With the ability to recognize the pattern of activity associated with regret, the findings could open the door to assessing how well the regret circuits in the brain operate in people with brain injuries or those with behaviors that suggest the absence of regret, including some politicians.

“If you don’t feel any regret, you are getting close to the world of addictive or antisocial behavior,” said coauthor Robert Knight, a neurologist and UC Berkeley professor of psychology.

Knight also sees an opportunity to compare regret in normal brains versus injured brains, including those of people with frontotemporal dementia that can lead to altered social behavior. The orbitofrontal cortex, for example, is often damaged by tumors, traumatic brain injuries and falls, leading to altered behavior.

The researchers reported their findings September 13 in the journal Current Biology.

The scientists recorded electrical activity directly from the surface of the orbitofrontal cortex as a person was presented with a betting opportunity, decided whether or not to bet, placed the bet and, half a second later, learned the outcome. The electrodes allowed the team to follow the thoughts swirling through that region of the brain millisecond by millisecond.

During the split second between betting and outcome, neural signals in the gamblers’ orbitofrontal cortex reviewed their most recent decision-making process, but spent much more brain power replaying aspects of the previous bet, including the regret they felt from losing or the regret, after winning, of not having bet more.

The brain activity looked very much like gamblers were second-guessing their earlier decision in light of whether they won or lost, even before they found out the results of their latest bet. Presumably, this helps us make better decisions in the future.

“After the subject has made a decision, the brain, far from idly waiting to find out the outcome, was busy revisiting what occurred during the previous decision — everything from whether they gambled and how much was won or lost, to how much regret they felt from their earlier decision,” Hsu said.

“From our subjects we get a better picture of the brain and what it is doing during decision-making, but it also gives some ground-truth for the type of signals we might look for in people with dysfunctions in decision-making,” Hsu said. “There is a lot more going on under the hood than is represented in our elegant but overly-simplified models and theories.”

The precision of ECoG

The work builds on many previous studies of the gambling brain, much of it conducted with functional magnetic resonance imaging (fMRI) and electroencephalograms (EEG), by recording directly from the cortical surface of the human brain. This technique, known as electrocorticography (ECoG), requires the placement of as many as several hundred electrodes as a mesh on the brain surface after the skull has been opened: access only possible with patients undergoing tests before surgery to treat epilepsy.

Saez, Hsu and Knight worked with 10 epilepsy patients across four hospitals in the U.S. to explore risk, regret and reward processing in the orbitofrontal cortex during a simple betting game. All patients had electrodes placed in this region of the brain, which is located just above the sinuses, behind the eyebrows, and is involved in reward processing, interpersonal interactions and integrating value and emotion into decisions, said Knight, who has investigated cognitive processing in hundreds of epilepsy patients over the past 10 years.

Earlier fMRI and EEG gambling studies found areas of the orbitofrontal cortex involved in assessing how much a person won, how much regret they felt, how much risk they were taking and how valuable their choice was, all of which guide future choices or help someone appraise how good or bad the outcome was, Hsu said.

Using ECoG, the UC Berkeley team detected activity related to choice and outcome evaluation for the immediate trial. However, during the 550 milliseconds between the bet and the outcome, activity in as many as half of the 200+ electrodes recorded was related to the recently completed trial, though NOT earlier previous trials.

The researchers varied the odds of winning and the reward for gambling on each trial so that the brain activity of previous trials was different enough for the researchers to distinguish which past trial the person was thinking about.

To Saez, the surprise was that all this information was processed in nearly simultaneous fashion across many areas of the orbitofrontal cortex — much more detail than could be seen previously with non-invasive approaches.

“Rather than one region tracking wins and another region tracking losses, information was highly distributed across the orbitofrontal cortex,” Saez said. “We think this is partly what allows the brain to process massive amounts of information in parallel to give us the capacity to make decisions both quickly and efficiently.”