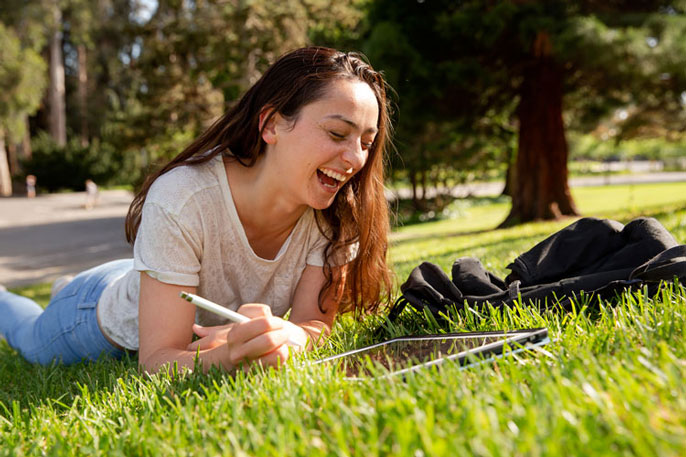 Four brilliant graduates were finalists for the University Medal.

When it came to applying to colleges in her senior year at Berkeley High School, Anna Boser had her sights set on, well, anywhere but UC Berkeley. She was born at Alta Bates Hospital, excelled in the city’s public schools and could literally find her way around her hometown blindfolded.

Her older twin brothers begged her to leave the nest, as they had done. But the universe had other ideas.

Boser, 21, a major in statistics with a perfect 4.0 GPA, is this year’s winner of the University Medal, UC Berkeley’s highest honor for a graduating senior. The prize comes with $2,500.

A sense of purpose and humor

Among other achievements, she has conducted field research on the spread of HIV in rural French Guiana; the effects of early marriage on the status of women in Niger, where she survived malaria; and the health impacts of wildfire smoke versus prescribed burns in Northern California. Some of her results have been published in journal papers, and others are pending publication.

As an emergency medical technician with the Berkeley Medical Reserve Corps, Boser assisted victims of the 2018 Camp Fire that destroyed the town of Paradise in Butte County. She’s also a harpist, violinist, swimmer and windsurfer, has a black belt in judo and is fluent in French.

“Ms. Boser is exactly the type of emerging citizen-scientist who should receive a University Medal. She possesses both a genuine passion for science as well as for helping those who are struggling, whether it is academically, socially or culturally,” wrote UC Berkeley associate professor Matthew Potts, the S.J. Hall Chair of Forest Economics, in his letter recommending Boser for the medal.

As with most of her scholarly ambitions, Boser applied for the University Medal on a whim. So, when she got the call on a recent Saturday from UC Berkeley bioengineering professor Gerard Marriott, chair of the committee that selects the University Medalist, she was wary. The longer he spoke, the more suspicious she became.

“He talked about how it was really hard to make a decision this year, and that everyone was really competitive, and that several candidates deserved to get the medal, and I was thinking, ‘Why are you taking so long to tell me I didn’t get the medal? This is so painful,’” she recalls.

“And then he said, ‘This is the fifth call I’m making today, and you’ve got the medal.’ I spent the next 15 minutes jumping in place.”

Normally, UC Berkeley’s top graduating senior gives a speech to thousands of the student’s peers at a campus-wide commencement ceremony in California Memorial Stadium. But with the specter of COVID-19 hanging over large gatherings on and off campus this spring, summer and possibly beyond, university leaders are still determining when and how to celebrate the Class of 2020.

“I’m definitely disappointed. There are a lot of things we graduating seniors were looking forward to that we won’t be able to do,” Boser says. “But despite all the things we’ve lost, we’ve also gained a lot of opportunities. And so, if we focus on those, we may come out of it better than we thought we would.”

California’s stay-at-home orders haven’t made a dent in Boser’s work ethic. Lately, she’s been working on a simulation project that measures the effect of interventions like school closures and quarantine on the spread of COVID-19 in the Bay Area.

When asked what drives her to want to alleviate poverty and suffering, she doesn’t miss a beat.

“Deep-seated guilt,” she deadpans. “The world has given me everything I could possibly ask for, and I’m so grateful. But I also think it’s so unfair. I want everyone to be able to have the same, and so I have to do my part so other people can have what I have.”

Fortunately, her privilege has been a force for good: “This ability to extend her personal ideals and passion to the broader social good is a truly wonderful quality,” Potts wrote.

Her father, Bernhard Boser, is a Swiss-born professor of electrical engineering at UC Berkeley. Her mother, Isabelle Guyon, is a French-born data scientist and pioneer in machine learning. Her brothers, Thomas, a data scientist, and Philip, an engineer, graduated from UC Santa Cruz and UC Riverside, respectively.

“All my family members are hardcore overachievers, particularly the women,” she says.

While she grew up admiring her parents’ academic and innovative pursuits, she wasn’t always crazy about their ideas of fun.

“My dad is obsessed with hiking and camping and backpacking, so he would drag us to do all those things, and me and my brothers developed a deep hatred for outdoor recreation very early on in life,” she says. “We absolutely despised it.”’

Boser started her formal schooling at the French-American Ecole Bilingue in the city of Berkeley, then spent second grade at a school in Switzerland. After developing a passion for the harp — which she still plays regularly — she attended The Crowden School in Berkeley, where she learned to play the violin.

An ‘F’ in socializing

At Berkeley’s Martin Luther King Jr. Middle School, she broadened her academic interests and social circle. And while academics came easily to her at Berkeley High, she struggled with friendships.

“I was that weird kid who dressed weird, who talked too much and was too loud, and I’m still just like that,” she says. “I totally failed at socializing in high school.”

Even more challenging was her junior year at the Lycée International de Valbonne in France, where she completed the notoriously difficult French-language baccalaureate.

“French kids dress nice and write nice. I wear sweatpants to school,” she says. Some classmates even dressed up as her for the annual French carnival: “I was their idea of a typical American,” she laughs.

Back at Berkeley High for her senior year, she found that her old friends had found new friends, setting her back socially. Eventually, though, she got back into a groove and graduated in 2016.

But her bids to elite public and private universities were rejected, leaving her hometown university as her best option.

“I was definitely bummed. I’ve been here my whole life,” she says. “But my parents let me stay in the dorms, and I was pleasantly surprised. Turns out growing up in Berkeley and going to college at UC Berkeley are two totally different worlds.

“Plus, it was kind of cool when my friends would ask about what to do in Berkeley, and I’d say, ‘Have you been to the Tilden Little Farm?’”

On campus, Boser discovered she was more of a doer and problem solver than a political activist. For example, during the 2017 campus protests against right-wing provocateur Milo Yiannopoulos, Boser and her friends were putting together an app for the campus’s Big Ideas innovation contest.

When they received a news alert on their smartphones about vandalism on Sproul Plaza, they seriously doubted that UC Berkeley students were involved.

“First of all, we love the Amazon store. You have to understand that about Cal students,” Boser says. “The Amazon store is, like, sacred.”

Contrary to her childhood contempt for the outdoors, she was now becoming fairly fanatical about hiking, camping and backpacking and looked for ways to integrate her interests in the environment and public health.

“Mostly, I just wanted to work with trees,” she says. At the same time, she was interested in how to empower the world’s most vulnerable communities.

And so, the summer after her freshman year, she headed to French Guiana to study how HIV was being spread among poor rural communities along the French-Brazilian border. The trip was successful and emboldened her to apply for an Undergraduate Research Apprentice Program fellowship to study women’s empowerment in the impoverished African nation of Niger.

The following summer in Niger, Boser was hit with culture shock — and malaria, from which she quickly recovered. Embedded with locals living in abject poverty, she soon found herself challenging Western assumptions about what’s best for women in developing countries. Her analysis is presented in a soon-to-be-published journal paper.

“The women in Niger had really strong social and economic reasons for opting to marry early, so giving them a viable alternative to early marriage, such as a quality education, should be a priority,” she says.

She returned to UC Berkeley feeling somewhat deflated from her time in West Africa, though it didn’t keep her from earning all A’s for courses in calculus, linear algebra, chemistry, physics, epidemiology, music, psychology and sociology.

Things started looking up when she completed her EMT training and joined the Berkeley Medical Reserve Corps. She worked with victims of the 2018 Camp Fire, then went on to train and deploy volunteers to major catastrophes.

“Being an EMT really energized me and gave me this wonderful new family,” she says.

Meanwhile, she completed “two of the most challenging introductory statistics courses in the country,” wrote Adam Lucas, a UC Berkeley statistics lecturer, in his glowing letter recommending Boser for the University Medal.

Unlike academics who are deeply focused on their fields of study for years at time, Boser is more project-oriented.

“What I like about public health is that the goal is to make the public healthy, and you can do that in so many different ways, from community outreach to creating an app or a vaccine,” she says.

But ultimately, she says she chose to major in statistics, albeit at the last minute, because it yields fast and effective results and provides “the big picture” that she finds so satisfying in her research.

This fall, Boser is headed to UC Santa Barbara to pursue a Ph.D. in environmental science and management. Her doctoral studies will be funded by a National Science Foundation graduate research fellowship and a Eugene Cota-Robles fellowship.

She had planned to hike the Pacific Crest Trail this summer, but the coronavirus pandemic has put that on the back burner.

Ironically, after all her friendship struggles at Berkeley High and during her first two years at UC Berkeley, she’s living in a house with six of her best friends. They eat meals together, goof around together and binge-watch the Netflix series “Tiger King” and Marvel superheroes movies.

“I finally succeeded in getting the best friend group in the world,” she says proudly, then adds, “And I can do it again.”

For her graduation, she and her housemates are planning a porch ceremony. One will stand in for Chancellor Carol Christ and give opening remarks. Another will dress as Captain America and give a keynote speech.

As for bidding farewell to UC Berkeley, she says, “I’m really excited, but I’m also sad because it’s been so perfect for me.”

“Still, at some point,” she says wistfully, “I have to leave the nest.”

And you can practically hear her big brothers breathe a twin sigh of relief.