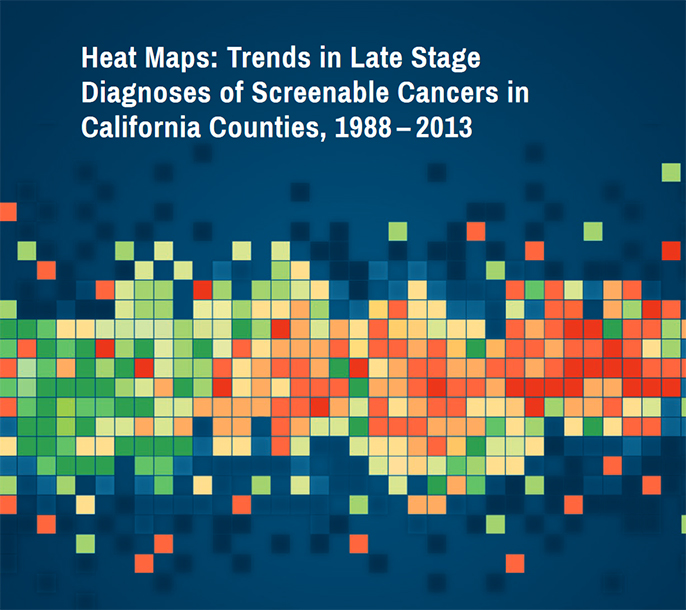 The CalCARES report uses heat maps to show areas with higher proportions of particular cancers diagnosed at a late stage, pointing to a need for increased screening.

A new report from the UC Davis Institute for Population Health Improvement (IPHI) shows the impact of cancer screening over the past 15 years, identifying areas where increased screening and other cancer-control efforts would save lives and significantly benefit population health.

“We have effective screening tests for several cancers, which allow physicians and other health-care providers to identify the disease at an earlier stage – often before symptoms surface – when treatment is more likely to result in a cure,” said senior author of the report and IPHI Director Kenneth W. Kizer. “However, too many Californians are not getting screened and, as a result, many persons are not being diagnosed until their cancers have progressed to an advanced stage.

“With cancer now surpassing heart disease as the leading cause of death in California and 22 other states, we need to increase cancer screening efforts to save lives,” he said.

For their latest report, CalCARES researchers reviewed statewide data from 1999 through 2013 to identify trends in the diagnosis of advanced cancers of the breast, colon and rectum, cervix, prostate, skin, and oral cavity and pharynx -- six sites of cancer for which effective screening methods exist. Some of these screening methods include visual inspection or procedures such as mammography, Pap smears, colonoscopy, fecal occult blood tests and prostate-specific antigen testing.

“Showing where in California cancer is being diagnosed after it has spread beyond a localized site shows where lives can be saved through improved screening,” Kizer said.

The report found that in California overall, late-stage diagnoses for cervical, prostate and oropharyngeal cancers significantly increased, but significantly decreased for breast cancer. Diagnosis of late-stage colorectal cancer and melanoma (a form of skin cancer) remained relatively constant. For each of these cancer sites, the researchers calculated important regional and county differences in advanced stage of diagnosis, which takes into account the growth and size of the tumor and whether it has spread to the lymph nodes or other organs.

IPHI researchers calculated the percent of cases diagnosed at an advanced stage for each cancer type and each county or region by dividing the number of advanced stage cases by the total number of cases for each year. The range of percentages were divided into eight color-coded categories, or heat maps, to indicate a decreasing trend (green tones) an increasing trend (red tones). Counties with fewer than 15 cases were excluded from the county analysis but were included in the regional and state calculations.

Two other recent studies by CalCARES investigators have shown a particularly large need for increased screening for colorectal cancer among Hispanic men in California and a need for greater use of gene expression profile testing for women with early stage breast cancer, especially among women with Medi-Cal health insurance.