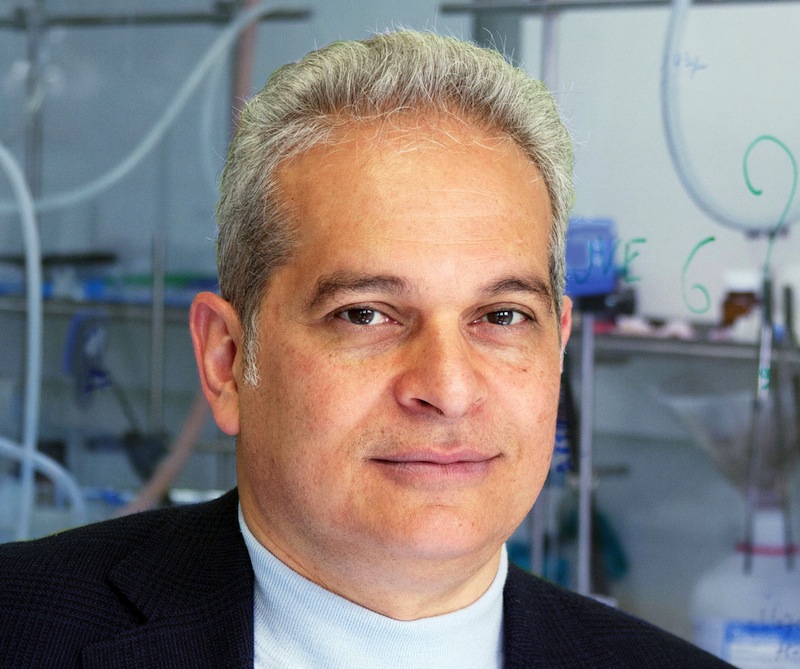 Behind its stylish art deco facade, the Gillespie Neuroscience Research Facility has hosted some of the most important scientific discoveries in UC Irvine's brief history.

From its laboratories came the first stem cell therapies for spinal cord injury, and breakthrough findings by researchers there on the roots of neurodegenerative diseases offer real hope for people with Alzheimer's and other brain disorders.

In this productive environment, Daniele Piomelli is uncovering the mechanisms of a key cerebral function, allowing him to look at human health and behavior on an even larger scale: He and his colleagues are mapping out the entire brain signaling system, which is revealing some of the reasons people feel depressed or anxious, experience pain, sleep poorly and crave certain kinds of food.

In doing so, Piomelli has found himself in a role most scientists would gladly avoid — as an articulate spokesman on America's most widely used illegal drug, marijuana.

UCI's Louise Turner Arnold Chair in the Neurosciences doesn't use the leafy product of the cannabis plant in his research, but his focus is on naturally occurring chemicals in the body called endocannabinoids that attach to the same brain cell receptors as does marijuana's active ingredient, THC, producing similar outcomes.

By promoting or suppressing the actions of endocannabinoids, Piomelli is also identifying compounds that herald a new class of pain relief, antidepressant and anti-inflammatory medications that in lab tests with mice are producing better results than current prescription drugs with fewer side effects.

"The study of the body's cannabinoid system is relatively young, scientifically speaking, but it's presenting promising opportunities for drug discovery," Piomelli says. "I feel we're on the forefront of a new frontier."

Pharmaceuticals have always been a part the Piomelli story. His father and grandfathers worked as pharmacists in a building in Naples, Italy, that had been home to a pharmacy for more than 400 years. Daniele was set to follow in the family business, but his love of discovery — which surfaced while he was studying archaeology in college — led him to Columbia University in the early 1980s to pursue a doctorate in pharmacology.

Instead of selling prescription drugs, he wanted to create them.

Piomelli moved into endocannabinoid research soon after its receptors were first identified in the late '80s. In 1994, while working as a researcher in Paris, he and his colleagues published a groundbreaking study in the scientific journal Nature showing how the endocannabinoid compound anandamide is produced.

Known as "the bliss molecule," anandamide has since been found to be an important regulator of feeding behavior and the neural generation of motivation and pleasure. Piomelli also calls it "a stress-coping molecule."

After joining the UCI faculty in 1998, Piomelli and his team hit upon a way to boost anandamide's stress-relieving abilities by devising inhibitor compounds to block enzymes in the brain from breaking down the neurotransmitter.

The finding led Piomelli to start Kadmus Pharmaceuticals Inc., which developed the University of California-patented inhibitors into a drug that has since passed a Phase I safety study. UCI is now searching for a company to continue testing the drug in a clinical trial.

In all, Piomelli's research has led to more than 20 patents. He's currently working with compounds designed to inhibit an enzyme that destroys a natural anti-inflammatory compound. He envisions the product, which would function as endocannabinoids, as a cream or ointment for treating atopic dermatitis, a skin disorder that afflicts 10 percent of children in the U.S.

"I have a strong attraction to translational research," says Piomelli, who partners with Italian Institute of Technology scientists in these efforts. "What we do is meant to be useful at the end of the day. When we study a new mechanism, we always try to create a molecular probe that interrupts or interacts with it in a useful way."

Because the compounds he studies are closely linked to those in marijuana, Piomelli is inevitably asked whether smoking pot can have the same benefits as a pharmaceutical drug.

It's not a question that can easily be answered, he admits. In a 2009 Q&A with The Washington Post about the subject, he pointed to research in which marijuana improved the well-being of patients with multiple sclerosis and alleviated chronic pain in patients with nerve damage. This was in addition to other work showing that marijuana's active ingredient, THC, reduces nausea after chemotherapy, stimulates appetite in AIDS patients and lessens tics in Tourette's syndrome — all with few or mild side effects.

But marijuana has severe limitations that stifle its use as a pharmaceutical drug. It's an intoxicant that impairs judgment, and its smoke contains countless potentially harmful chemicals. Along with being addictive — "but not as addictive as nicotine or opioid-based prescription painkillers," Piomelli says — marijuana comes in varieties containing different levels of THC, so establishing a correct dosage would be practically impossible.

"I don't agree that marijuana is good for you because it's natural," he says. "That's silly, and I don't think silly things are good for you."

Still, Piomelli questions the federal government's decision to keep marijuana classified as a Schedule I controlled substance, a drug having a high potential for abuse with no currently accepted medical value.

In a 2005 editorial for The Washington Post, he advocated a sensible marijuana law recognizing it as an addictive drug that requires careful monitoring but allowing medicinal use of its active component when appropriate.

"Because of THC's Schedule I status," Piomelli wrote, "… research sometimes faces extra bureaucratic hurdles. But preventing a few months of paperwork to a scientific project is not the main reason the drug and its derivatives should be reclassified to a schedule that is in accord with their medical utility. Far more important is the goal of having realistic drug laws in this country that penalize drug abuse but also encourage medical progress."

"Politics do not mingle well with science," he says. "Science is fact-based. Political ideology is ideas-based and looks at cannabis as either a panacea or evil. For scientists, neither is true. We need more thoughtful legislation."

Although he may be at odds with marijuana and THC'sclassification, Piomelli has long enjoyed support from the National Institute on Drug Abuse because his work is relevant to understanding how marijuana smoke affects a user. In 2010, he received the NIDA's first Avant-Garde Award for Innovative Medication Development Research, and he has served on the National Advisory Council on Drug Abuse.

Piomelli last year was among the first recipients of a UC Proof of Concept grant, which aims to bridge the gap between research and commercialization. The funding supports his translational research efforts to create a pain relief medication that enhances the effects of anandamide.

Because his work reveals how external factors like stress or diet trigger endocannabinoids in the body, Piomelli often addresses how human behavior can be driven by these marijuana-like compounds.

A study he published last year drew an especially large amount of public attention. He and his colleagues found that dietary fats trigger an endocannabinoid response that makes fatty foods nearly irresistible, potato chips being a prime example.

Piomelli says that this and other research often leads to long discussions with his wife and teenage daughter about human nature and how to maintain a healthy lifestyle. But does it prompt change?

"I still eat potato chips myself," he admits. "With studies like these, the thrill of opening a new door is amazing, but many times we scientists are cognizant that we still have so much left to learn. Even so, I really strive to be at the forefront of my field. That's what makes science worthwhile for me."