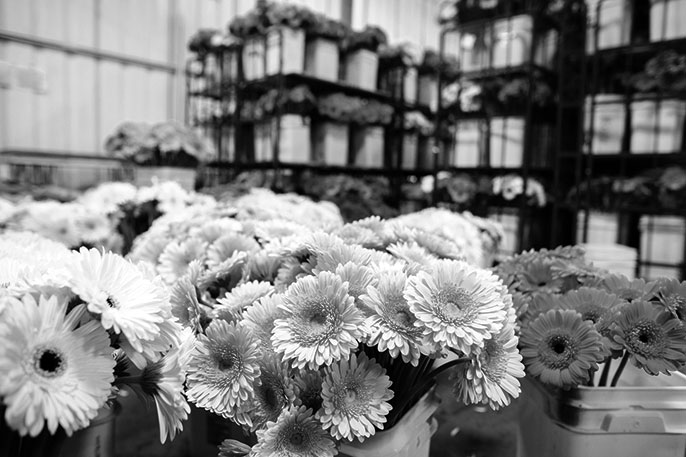 Instead of blooms in a riot of color, people with achromatopsia see in black and white, and cannot tolerate bright light.

The research team is very interested in hearing from other families that may have this disorder. “There are probably more people out there with these gene mutations. We’re interested in doing screening and seeing if this is contributing to vision loss in other families,” says Jonathan Lin, M.D., Ph.D. Interested persons can contact Shiley Eye Institute at eyesight.ucsd.edu/contact-us.

People with achromatopsia, an inherited eye disorder, see the world literally in black and white.  Worse yet, their extreme sensitivity to light makes them nearly blind in bright sunlight. Now, researchers at University of California, San Diego School of Medicine and Shiley Eye Institute at UC San Diego Health System have identified a previously unknown gene mutation that underlies this disorder.

“There are whole families with this sort of vision problem all over the world,” said Jonathan Lin, M.D., Ph.D., senior study author and an associate professor in the UC San Diego School of Medicine Department of Pathology. “We’re very excited to have discovered a mutation in the ATF6 gene which plays a major role in this disorder.”

Five other genetic mutations have previously been identified by research groups as pivotal in achromatopsia, which causes markedly reduced visual acuity and very poor or no color vision. “But we still had families that didn’t have any of those gene mutations,” said Lin, also a researcher at the UC San Diego Shiley Eye Institute. “We knew this meant there must be other genes and proteins involved.”

The study, which involved an international collaboration of inherited retinal disease specialists, found that a mutation in the ATF6 gene damaged proteins necessary for proper function of the eye’s cone photoreceptors. The eye has millions of these receptors, which control color recognition and daytime vision.

In achromatopsia, malfunction of the cone photoreceptors causes sufferers to be either totally or predominantly colorblind. This type of colorblindness is different from the more common version, which makes some people unable to distinguish between red and green. “Achromatopsia sufferers see images on the gray scale,” explained Lin.

They also have problems with visual acuity and sensitivity to light. As levels of light increase, their vision decreases. Disease severity varies from person to person. Some sufferers wear extremely dark tinted lenses to help them function in bright sunlight and red tinted lenses to improve visual acuity in indoor lighting. In severe cases, achromatopsia sufferers “can’t drive, read, watch TV or have a job,” said Lin. “With that level of vision, they are functionally blind.” About 10,000 Americans have the disorder.

In the study, the scientists looked at 18 achromatopsia patients from 10 different families who had been identified as lacking the five previously known gene mutations. The families received testing in the lab of Susanne Kohl, Ph.D., the study’s first author from Centre for Ophthalmology at University of Tübingen in Germany. Kohl is a prominent researcher in the field, whose lab previously identified several of the achromatopsia gene mutations. Blood drawn from study subjects was analyzed using gene sequencing technology. All 18 were found to have the ATF6 gene mutation.

Lin said the ATF6 gene, when working properly, is a key regulator of the unfolded protein response (UPR), a cellular stress relief mechanism drawing major scientific interest due to its role in many diseases. The UPR is a critical player in helping the body’s cellular proteins work correctly, which is extremely important since proteins carry out many biological functions. The UPR steps in and fixes misshapen or badly folded proteins, which can accumulate in the cell’s endoplasmic reticulum if the cell becomes too stressed. If not fixed, the misshapen proteins won’t work properly or they die.

“In this particular disease, we think a mutation in the ATF6 gene disrupts the UPR process and causes the production of bad proteins which keep cone photoreceptors from functioning properly,” said Lin.

He noted that the UPR is a different molecular mechanism than those affected by the other five gene mutations. “We’re really excited because this (UPR) is a new pathway found to be involved in this disease,” he said. The discovery also could have application in other diseases. “It raises the possibility that the ATF6 gene mutation, and subsequent UPR dysfunction in the cone photoreceptors, may be related to other much more common eye diseases, such as macular degeneration and retinitis pigmentosa,” said Lin. These and several other eye diseases involve the loss of cone photoreceptors.

Along with studying the mutation in human blood cells, the research team tested their finding in mouse models. “Coincidentally, there was an existing mouse model lacking this ATF6 gene,” he said. When analyzed, the researchers found these mice had normal vision at birth, but lost their vision with age. “This provided more evidence that this gene is really important for making sure cells of the eye function properly.”

The finding is exciting, continued Lin, because it provides an opportunity to eventually develop a treatment. Currently, there is no cure or treatments for achromatopsia. “It’s early days yet,” he said. “But pinpointing the genetic cause allows us to focus on finding a way to block this mutation. Clinical trials are already in the works to fix one of the other mutated genes, and gene therapy is also under investigation.”

The research was funded, in part, by the National Institutes of Health, foundation grants and other sources from study co-authors and their institutions.