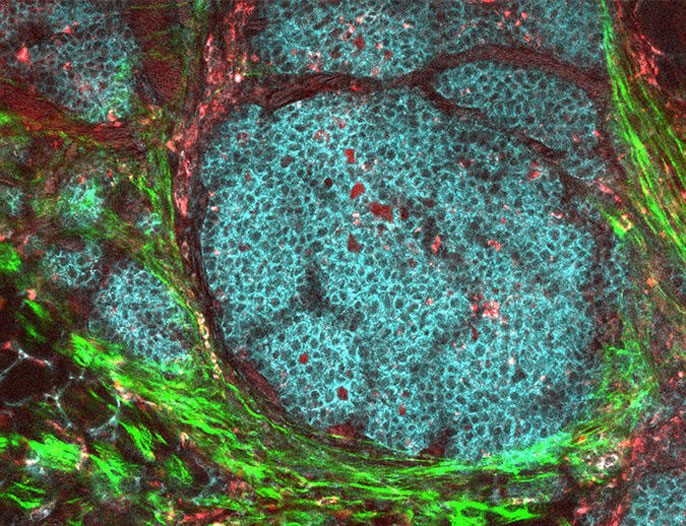 A breast cancer tumor and its microenvironment.

In a breakthrough with important implications for the future of immunotherapy for breast cancer, UC San Francisco scientists have found that blocking the activity of a single enzyme can prevent a common type of breast cancer from spreading to distant organs.

While studying a mouse model that replicates key features of early-stage human breast cancer, the researchers discovered that a ubiquitous enzyme called MMP9 is an essential component of the cancer’s metastasis-promoting machinery, helping to create a hospitable environment for itinerant cancer cells to form new metastatic tumors.

“Metastasis is the biggest hurdle when it comes to successfully treating breast cancer, and solid tumors in general,” said Vicki Plaks, Ph.D., now an assistant adjunct professor in the department of orofacial sciences at UCSF. “Once a cancer becomes metastatic, there’s really no cure, and the only option is to manage it as a chronic disease.” Plaks co-led the team that made the discovery when still a postdoctoral fellow in the laboratory of Zena Werb, Ph.D., a professor of anatomy and associate director for basic science at the UCSF Helen Diller Family Comprehensive Cancer Center.

When they examined lung tissue in their mouse model, the researchers found that MMP9 is involved in remodeling healthy tissue and transforming it into a kind of safe haven for migrating breast cancer cells. When the cancer cells colonize these sites with the help of MMP9, they’re able to start growing into new tumors.

The new study, published Nov. 14 in the journal Life Science Alliance, shows that these metastases can be stopped before they are able to lay the foundations for tumor growth. By administering an antibody that specifically targets and disrupts MMP9 activity, the scientists were able to prevent cancer from colonizing the lungs of mice. But interestingly, interfering with MMP9 had no effect on the primary tumor, which suggests that the enzyme’s primary role in this scenario is helping existing malignancies metastasize and colonize other organs rather than promoting the growth of established primary tumors.

Prior to this study, Werb and others had found that MMP9 plays an important role in remodeling the extracellular matrix (ECM) — a patchwork of biomolecules found outside of cells that provides structure and shape to organs, helps cells communicate with one another, and establishes a microenvironment that promotes cell health, among its many other functions. Although MMP9 was known to be involved in cancer, specifically in remodeling the ECM to build tumor niches that are hospitable to malignancies, its role in the earliest stages of metastasis had not been fully explored.

“Lots of studies that examined metastatic niche formation in breast cancer have focused on late-stage cancers, when the tumors are fairly progressed. What sets our study apart is that we chose to focus on processes that alter the tumor and metastatic microenvironment early on. This approach enabled us to show that MMP9 really matters in the early stages,” said Mark Owyong, co-lead author of the new study with Jonathan Chou, M.D., Ph.D., a clinical fellow in the UCSF School of Medicine. Owyong, Chou and Plaks conducted the research as members of the Werb lab.

The first hint that MMP9 might be involved in early-stage metastasis came from publicly available gene expression data from clinical breast cancer biopsies. While sifting through this data, the researchers noticed that MMP9 levels were elevated in metastatic disease.

To further investigate MMP9’s role in metastasis, the researchers turned to a unique mouse model of “luminal B” breast cancer, which is among the most frequently diagnosed forms of the disease. “We selected the model because it’s one of the few that captures the natural progression of breast cancer, closely mimicking the progression of the disease experienced by patients,” Owyong said.

In a key set of experiments, the researchers injected tumor cells into mice that had early stage breast cancer but no discernible metastases. They found that the cells colonized the lungs and formed new tumor growth sites. But when these cells were injected into genetically identical mice without breast cancer, no metastases formed.

When the experiment was repeated in mice with early stage breast cancer whose MMP9 gene had been knocked out, there was a significant reduction in the size of metastatic lung tumors, though there was no effect on the primary breast tissue tumor. These findings suggest that MMP9 is required to promote metastasis, but not essential for continued growth of the primary tumor.

“This was a very promising result and suggests that a therapeutic paradigm focused on intercepting metastasis early might offer a new route for treating certain kinds of breast cancer.”
–Vicki Plaks, Ph.D.

Similar results were seen when the researchers disrupted the activity of MMP9 with a unique antibody that specifically targets the activated form of the enzyme. The researchers injected tumor cells into these mice, followed by injections of the antibody every two days. At the end of the treatment regimen, the researchers inspected the mice and saw a significant reduction in the number and size of lung metastases in mice who received the antibody compared with those that didn’t.

“This was a very promising result and suggests that a therapeutic paradigm focused on intercepting metastasis early might offer a new route for treating certain kinds of breast cancer,” said Plaks.

Immunotherapies work by enlisting the body’s immune system to find and kill cancer cells. But certain cancers — including luminal B breast cancer, the main focus of the new study — don’t succumb to immunotherapy. According to Plaks, this is because, beyond their direct effects on metastatic growth, MMP9 also plays an important role in remodeling the ECM and building mesh-like barriers around metastatic sites that help to exclude immune cells. This may explain why some metastatic cancer cells are able to evade the immune onslaught triggered by immunotherapies.

But the new study shows that when MMP9 is incapacitated, metastatic sites may no longer be able to keep immune cells at bay. Plaks thinks that this represents an important step towards making breast cancer more susceptible to immunotherapies that have proven effective against other forms of cancer.

“These findings come at an exciting time in cancer immunology, with antibodies targeting MMP9 being actively explored for clinical use within the biotech industry,” Plaks said. “There’s been great interest in trying to use immunotherapy to treat metastatic breast cancers of the luminal B type, but so far, success has been limited. Our work indicates that a combination approach of immunotherapy with antibodies targeting MMP9 activity might actually succeed.”

Funding: This study was supported by a Department of Defense Postdoctoral Fellowship, National Cancer Institute grants R01 CA057621 and U01 CA199315, the Parker Institute for Cancer Immuno- therapy and funds from the Israel Science Foundation.

Disclosures: The authors declare that they have no conflict of interest.