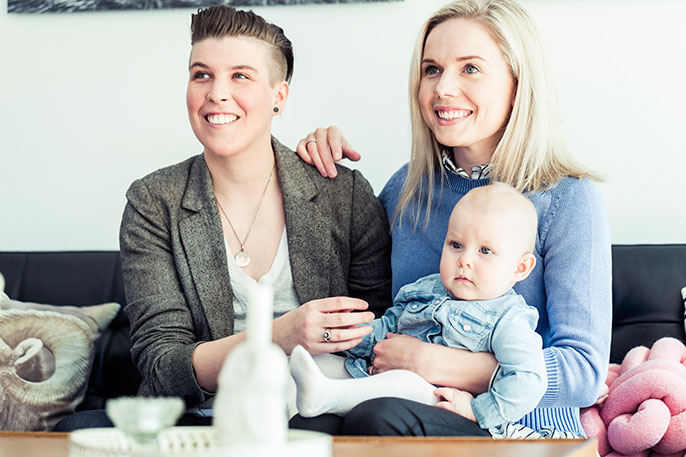 UCSF's PRIDE Study will examine health within the LGTBQ community.

The Pride Study is the first large-scale, long-term health study of people who identify as lesbian, gay, bisexual, transgender, queer (LGBTQ), or another sexual or gender minority. Find out more.

Countless clues about heart health have emerged from the tiny town of Framingham, Mass. From diet and exercise to the effects of aspirin, these tips are results of a long-term study in which researchers have tracked the long-term health of a cohort of Framingham residents since 1948. Now researchers at UC San Francisco are aiming to do for lesbian, gay, bisexual, transgender and queer (LGBTQ) health, what the Framingham study did for heart health.

>The Population Research in Identity and Disparities for Equality, or PRIDE, Study is the first study of this kind to better understand the health of LGBTQ adults in the United States. It’s a longitudinal cohort study that uses an iPhone app to connect with and track sexual and gender minority adults over time to understand factors related to health and disease in this population.

“The LGBTQ community has been understudied and underserved in health care settings,” said Kirsten Bibbins-Domingo, M.D., Ph.D., MAS, professor of epidemiology and biostatistics at the UCSF School of Medicine and director of the UCSF Center for Vulnerable Populations. “This timely study helps fill the gap in our understanding of health and disease risk in this population, and importantly involves and engages members of these communities in this health-related research in important and novel ways.”

In 2011, the Institute of Medicine published a report that assessed current knowledge of LGBT health. “They concluded that the greatest threat to describing the health status and needs of LGBT people is the lack of population-based data,” said Mitchell Lunn, M.D., a research fellow in the UCSF School of Medicine. “Now, we’re creating an electronic cohort to help gather that data.”

Lunn and Juno Obedin-Maliver, M.D., MPH, also a research fellow in the School of Medicine and the San Francisco Veterans Affairs Medical Center, founded the PRIDE Study to engage the LGBTQ community, understand their health priorities, and frame research questions to address specific disease risks, outcomes, and resiliencies in this population.

The two-part study begins with a “community listening” phase, where the team will gather and understand basic demographic and census data to understand the LGBTQ community’s health questions and priorities. After this phase, prioritized questions will be framed and answered in a traditional longitudinal cohort study, which the researchers expect to begin in approximately six to nine months.

Nearly 600 participants have pre-enrolled in the study. With their electronic platform, Lunn and Obedin-Maliver aim to reach thousands more.

Connecting with participants through an app

The PRIDE Study app is based on ResearchKit, an open-source software framework developed by Apple, which helps researchers gather data more frequently and accurately from participants using mobile devices. For example, other researchers have created apps to measure dexterity and gait in Parkinson’s disease patients and blood glucose levels in diabetes patients. The PRIDE Study is the first to use this platform to study a population rather than a specific disease.

“We are excited to use this technology and share the study’s outcomes, but we have no partnership, financial or data transfer arrangements with Apple,” said Obedin-Maliver

Previously, small-scale studies have hinted that LGBTQ community members are more susceptible to conditions such as depression and anxiety, and are at higher risk of suicide. Behaviors such as smoking are also more prevalent, but little is known about the population-wide occurrence of such behaviors, or how to frame interventions to decrease risks.

“There’s a real lack of evidence-based information on community health,” said Obedin-Maliver. “The current landscape for LGBTQ health is less of a map and more of a signpost in the desert. We aim to create that map.”