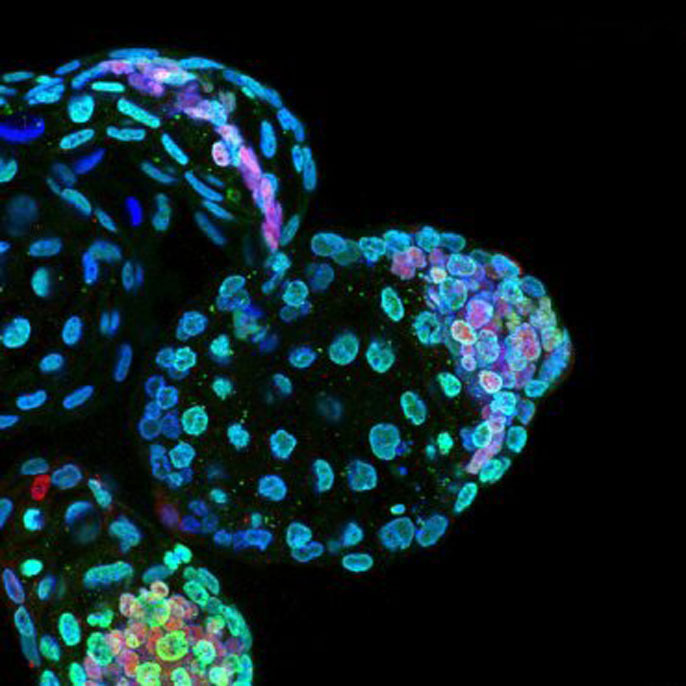 UCSF researchers have placed mouse embryos into suspended animation, which pauses the development.

UC San Francisco researchers have found a way to pause the development of early mouse embryos for up to a month in the lab, a finding with potential implications for assisted reproduction, regenerative medicine, aging and even cancer, the authors say.

The new study — published online Nov. 23, 2016, in Nature — involved experiments with preimplantation mouse embryos, called blastocysts. The researchers found that drugs that inhibit the activity a master regulator of cell growth called mTOR can put these early embryos into a stable and reversible state of suspended animation.

“Normally, blastocysts only last a day or two, max, in the lab. But blastocysts treated with mTOR inhibitors could survive up to four weeks,” said the study’s lead author, Aydan Bulut-Karslioglu, Ph.D., a postdoctoral researcher in the lab of senior author Miguel Ramalho-Santos, Ph.D., who is an associate professor of obstetrics/gynecology and reproductive sciences at UCSF.

Bulut-Karslioglu and colleagues showed that paused embryos could quickly resume normal growth when mTOR inhibiters were removed, and developed into healthy mice if implanted back into a recipient mother.

Discovery was surprise to researchers

The discovery was a surprise to the researchers, who had intended to study how mTOR-inhibiting drugs slow cell growth in blastocysts, not to find a way to put the embryos into hibernation.

“It was completely surprising. We were standing around in the tissue culture room, scratching our heads, and saying wow, what do we make of this?” said Ramalho-Santos, who is a member of the Eli and Edythe Broad Center of Regeneration Medicine and Stem Cell Research. “To put it in perspective, mouse pregnancies only last about 20 days, so the 30-day-old ‘paused’ embryos we were seeing would have been pups approaching weaning already if they’d been allowed to develop normally.”

Further experiments demonstrated that cultured mouse embryonic stem cells – which are derived from the blastocyst-stage embryo — can also be put into suspended animation by mTOR inhibitors. The drugs appear to act by reducing gene activity across much of the genome, the team found, with the exception of a handful of so-called “repressor” genes that themselves may act to inhibit gene activity. The researchers tested a number of different mTOR inhibitors and found that the most effective was a new synthetic drug called Rapa-Link that was recently developed at UCSF by the lab of Kevan Shokat, Ph.D.

The researchers believe that it should be possible to extend the suspended animation for much longer than the 30 days observed in the present study, Bulut-Karslioglu said: “Our dormant blastocysts are eventually dying when they run out of some essential metabolite within them. If we could supply those limiting nutrients in the culture medium, we should be able to sustain them even longer. We just don't know exactly what they need yet.”

Bulut-Karslioglu and colleagues demonstrated that the dormant state they were able to induce in blastocysts by blocking mTOR was almost identical to the natural ability of mice to pause a pregnancy in its early stages. This temporary stasis, called diapause, occurs in species across the animal kingdom, and in mammals from mice to wallabies, it typically allows mothers to delay pregnancy when food is scarce or they are otherwise stressed.

It makes sense that mTOR would be involved in the process of diapause, Ramalho-Santos said: “mTOR is this beautiful regulator of developmental timing that works by being a nutrient sensor. It doesn’t just drive cells into growing willy-nilly; it tunes cell growth based on the level of nutrients that are available in the environment.”

It is an open question whether humans also have the ability to pause pregnancies at the blastocyst stage, Bulut-Karslioglu said, because the time from fertilization to implantation is hard to measure in humans. However, anecdotal accounts from practitioners of in vitro fertilization of unusually long pregnancies and mismatches between the timing of artificial embryo transfer and the resulting pregnancy suggest that humans too may have the ability to delay implantation of fertilized embryos in some circumstances.

Implications for other fields of medicine

The new research could have a big impact on the field of assisted reproduction, where practitioners are currently limited by the rapid degradation of embryos once they reach the blastocyst stage. Putting blastocysts into suspended animation may avoid the compromise of freezing embryos and give practitioners more time to test fertilized blastocysts for genetic defects before implanting them, Bulut-Karslioglu said.

MTOR inhibitors are already in clinical trials to treat certain forms of cancer, but the new results suggest a potential danger of this approach, Ramalho-Santos said: “Our results suggest that mTOR inhibitors may well slow cancer growth and shrink tumors, but could leave behind these dormant cancer stem cells that could go back to spreading after therapy is interrupted. You might use a second or third line of drugs specifically to kill off those remaining dormant cells.”

The authors are eager to explore whether mTOR inhibitors and related downstream biochemical pathways can drive stem cells into a dormant state at later stages of development, which could have major implications efforts to repair or replace ailing organs in the field of regenerative medicine. The findings also have potential implications in aging research, the authors say, where mTOR inhibitors have already been shown to extend the lives of mice and other animals, an outcome which the authors suggest could result in part from preserving more youthful stem cells.

“This is a great example of the power of basic science,” Ramalho-Santos said. “We weren't looking for ways to pause blastocyst development or mimic diapause. We weren’t trying to model aging or test cancer therapies or develop better techniques for tissue regeneration or organ transplantation. None of that was in our mind, but our experiments told us we were on to something we had to understand, and we couldn’t ignore where they led.”

Additional authors on the paper are Steffen Biechele, Ph.D., and Trisha A. Macrae,  of the Eli and Edythe Broad Center of Regeneration Medicine and Stem Cell Research, Center for Reproductive Sciences, and Diabetes Center at UCSF; Hu Jin, Miroslav Hejna, Ph.D., and Jun S. Song, Ph.D., of the Carl R. Woese Institute for Genomic Biology at the University of Illinois, Urbana-Champaign; and Marina Gertsenstein, Ph.D., of the Centre for Phenogenomics in Toronto.