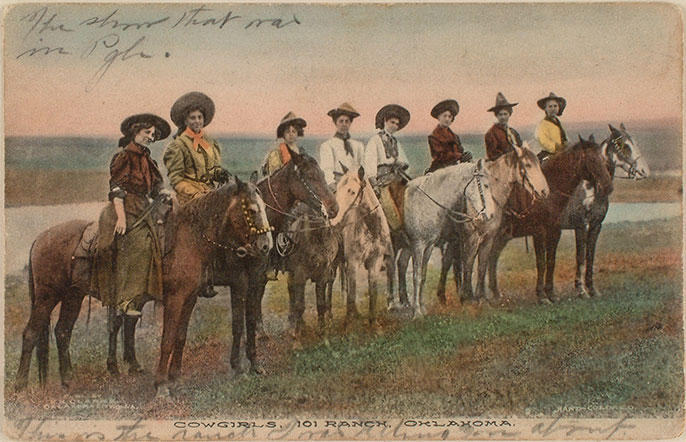 A postcard of the 101 Ranch in Oklahoma. The 101 was a working ranch best known for the Wild West shows it began to stage in 1905. Such entertainment has shaped popular conceptions of the West, UCLA historian Stephen Aron argues in a new history of the region.

Born and raised in Queens, New York, Stephen Aron didn’t set out to become an authority on the American West. Even after moving to California to attend graduate school in the 1980s, he expected to become a historian of colonial America and the early years of the republic. But being asked to teach a course on the history of the West at his first teaching position, at Princeton University, changed that.

Since joining UCLA’s history department in 1996, Aron has established himself as a leader in the field, and he’s developed a reputation for building bridges between academia and the general public. For the past 12 years, Aron has split his time between campus and the Institute for the Study of the American West at the Autry National Center, where he has overseen museum exhibits and public programs, and he has appeared several times on NBC’s (and now TLC’s) show “Who Do You Think You Are?” in which a celebrity explores his or her ancestry.

So it made sense when Oxford University was looking for an author to condense the massive scope of Western history for its mainstream “Very Short Introduction” series, it would turn to the public intellectual who in July will become chair of UCLA’s History Department and will in 2017 assume the presidency of the Western History Association.

In the recently published “The American West: A Very Short Introduction,” Aron traces the evolution of the American frontier and West from 900 A.D. to the present. UCLA Newsroom’s Meg Sullivan spoke recently with Aron.

What’s new in our understanding of the Old West?

Our understanding of the West isn’t limited anymore to “the Old West” or “the Wild West,” which was a period of about 30 years from the Civil War to the end of the 19th century. And the focus is no longer on the triumph of the United States over “lesser” peoples. A generation of research has enlarged the geography, expanded the chronology and, most importantly, broadened the cast to capture the North American frontier and borderlands and the modern West as places of enormous complexity and demographic diversity.

Where does the popular view of the West come from?

It goes back to generations of popular culture, starting with dime novels, western painting and Wild West shows in the late 19th and early 20th centuries and then movies and television. It’s important to remember that Westerns were the dominant genre for the first half century of Hollywood’s life and were the principal export from Hollywood to the United States and to the world, providing a view that accented the winning of the West. But that triumphant vision has come to be contested. There is no history of westward expansion or the American West apart from the history of Indian people and their contractions and resistances and survival in the face of colonial pressures they’ve faced over the last several hundred years.

You make the alarming claim that Nazi Germany and Imperial Japan looked to the United States as a model for how to “conquer hinterlands, cleanse them of ethnically ‘savage’ inhabitants, and colonize them with settlers.”

That’s not to say that what the United States did to Indians is equivalent to what the Nazis did to peoples it conquered and sent to extermination camps. But it’s true that some members of the German and Japanese Imperial administrations looked at the United States as an example of how to expand their territorial reach and repopulate areas with their own settler population, as well as to cleanse out the indigenous population. It’s obviously a startling and discomforting idea to think that the United States provided a model for such horrific regimes.

In fact, you write that the extermination of American Indians in California would actually meet the criteria established in 1948 by the United Nations for a genocide. What’s the evidence?

The best statistics suggest that California’s Indian population when the Spanish arrived was about 300,000 in 1770. By the time of the American takeover after the Mexican American War in 1848, that population had been halved as a result of missionization, disease, impoverishment and so forth. In the 20 years after California’s Gold Rush commenced, the population had reduced to between 20,000 to 30,000. Whole groups were wiped out. Historians have resisted applying the term “genocide” in this case because they’ve attributed most of those deaths to diseases. And by and large most of the epidemics that decimated Indian populations across the Americas were unwittingly perpetrated. But my colleague (UCLA assistant professor of history) Ben Madley has discovered another element at play in California. The state was paying scalp bounties. The state was allowing irregular forces and regular militia to perpetrate mass killings. The state also was allowing Indians in their care to basically starve to death.

Maybe it’s because we’re going through a drought right now, but it struck me that water scarcity is a major theme in your history.

In the Jeffersonian vision, the West was going to be the garden that would allow the United States to remain an agrarian nation of small family farmers. What, of course, Jefferson didn’t grapple with is that the western half of the continent is not a mirror of the East, and the West is an arid and semi-arid landscape, most of which is not capable of supporting the kind of agriculture and urbanization that founders envisioned. The great triumph of irrigation and hydraulic reengineering has made it possible for tens of millions of people to live in California and other parts of the arid and semi-arid West. But ultimately we have to figure out how to reconcile ourselves to the limits that aridity places on us. The current drought is just a reminder that water in the West has always been in scarce supply.

Another recurring theme seems to be a love-hate relationship with the federal government. How does that friction parse with the West’s identity?​

The West is seen as something that was settled successfully because of heroic individualism acting beyond the reach of government. Even today we have someone like (Nevada cattle rancher and grazing fees opponent) Cliven Bundy positioning himself as the heir to this tradition of the rugged individualistic pioneer who asks nothing from government. In fact, the conquest, colonization and consolidation of frontiers could not have been accomplished without the leadership and the money from the federal government. Absent the federal government’s role in pacifying Indians, in taking and distributing lands and in providing the infrastructure that made possible economic development and agriculture, American expansion surely would not have taken place at the pace it did. The federal government built dams and continued the military infrastructure which caused much of the Western economy — particularly California’s economy — to boom in the second half of the 20th century. In all these ways, the government has led and supported and Westerners have long fed from the federal trough. Dependence begets resentment, and that is central to understanding the complex dynamic at play.