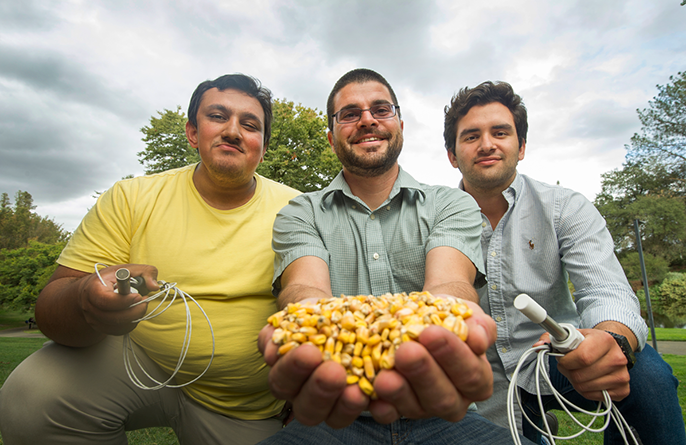 The top prize in the UC World Food Day Video Challenge went to a team of two UC Davis students working with their adviser to advance the science behind drying and storing food in developing countries.

The enormous potential for food safety — helping perhaps billions worldwide in the fight against chronic hunger — is what first drew the undergraduate students, Carlos Orozco-Gonzalez and Umayr Sufi, to the project.

“We are wasting a lot of food, regardless of where we are in the world,” said Irwin Donis-Gonzalez, the adviser and UC Davis Cooperative Extension specialist featured in the video. “With Carlos and Umayr, we are combining biological and engineering sensing concepts that can be applied to solving world issues.”

Donis-Gonzalez called the two students “the perfect match” for the Department of Biological and Agricultural Engineering. Orozco-Gonzalez brought his background in business technology to the team, while Sufi applied his studies in biochemical and molecular biology.

Orozco-Gonzalez, the official producer of the video, has received the $1,000 cash award and a trip to the World Food Prize Borlaug Dialogue, an international symposium for food and agriculture being held this week in Des Moines, Iowa. The UC Davis World Food Center, which held the Video Challenge, also will be leading a panel discussion on nutrition at the symposium.

Connecting small growers to their communities

“In shaping that narrative of what low-income looks like,” said Vang, a re-entry student in the Sustainable Agriculture and Food Systems program, “this is an opportunity to dispel the belief that low-income people are not interested in their health or eating quality foods.”

For her research, Vang worked closely with a Hmong community in Minnesota — the largest in the country — and hopes to introduce this new approach to nutrition security to Sacramento’s low-income areas as well. Vang’s research goals have been shaped by her experience working and living for more than two years on an organic farm in Spain and then at two innovative food startups in San Francisco.

The two winning videos were unveiled Monday afternoon at a World Food Day lecture by Catherine Bertini, a former director of the United Nations World Food Programme. The lecture was held on campus and streamed online.

In the spirit of this annual day of action against hunger, celebrated on Oct. 16, the World Food Center at UC Davis reached out to students across all 10 campuses to share the impact of UC research on the planet’s food systems for the Video Challenge. The center partnered with the Nutrition Policy Institute at the UC Division for Agriculture and Natural Resources, with funding support from the UC Global Food Initiative.

With the success of the Video Challenge, the organizers hope to build this into an annual competition, meaning students can now start planning their research videos for the 2017 submissions.