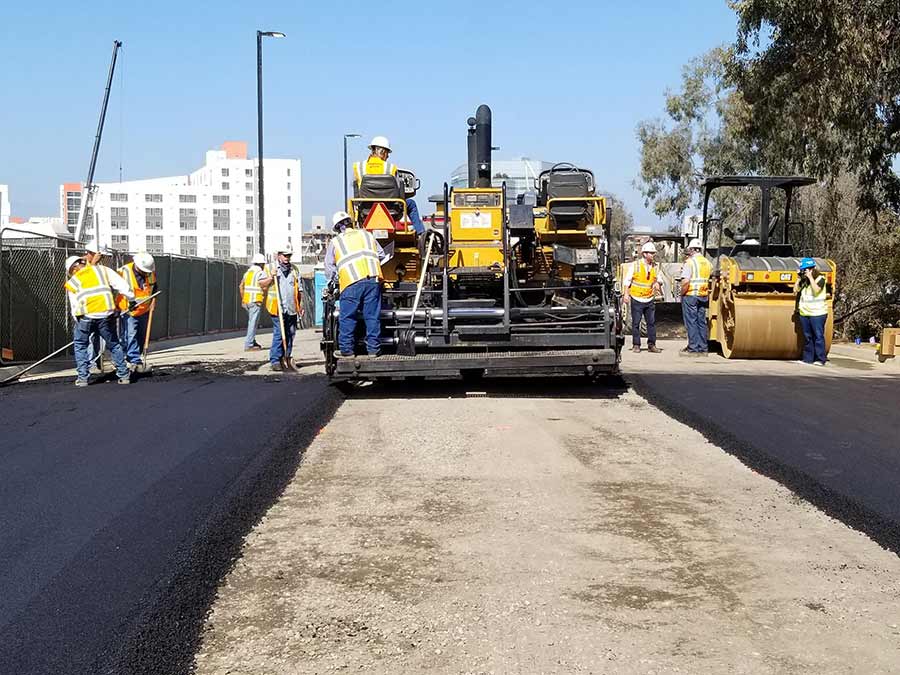 It is estimated that humans now produce 420 million tons of plastic annually, with a significant portion of that entering our oceans.

Because plastic does not break down quickly, it is now considered one of the world’s most significant environmental threats. In an effort to help address the planet’s overage of plastic, UC San Diego recently became the first in the United States to install a road that utilizes recycled plastic.

The campus enlisted the UK-based company MacRebur Ltd to test out its patented plastic roads concept on a portion of Miramar Street at Regents Road, near the Mesa Nueva Graduate Student Housing. The asphalt contains recycled plastic materials instead of petroleum-based bitumen as a binder.

MacRebur created the “plastic road” technology to address two key global issues: what to do with all the plastics on the planet, and maintaining roads around the globe in a cleaner way. UC San Diego Construction Commodity Manager Gary Oshima first came upon the novel technology in a Facebook post, featuring a TED talk by MacRebur co-founder and CEO Toby McCartney.

“UC San Diego encourages innovation on campus, particularly as it relates to sustainability, and I thought this might be a viable solution for California and the U.S.,” said Oshima.

He contacted the company, which expressed interest in finding a location to introduce their product in the U.S. MacRebur had already installed their roadways in the U.K. and Australia, with favorable results. The company offered to donate the plastic for the first installation on campus, and a partnership was conceived.

“We’re delighted to be teaming up with UC San Diego to bring our pioneering plastic roads to California and the U.S. for the first time,” said McCartney. “We pride ourselves on being an innovative company and UC San Diego shares these values and is clearly a leader in their field.”

The campus will test the new asphalt road for wear and other factors to determine its viability for usage beyond UC San Diego.

“Creating alternative uses for recycled plastic will be a crucial challenge that we all must resolve and maintaining over four million miles of roads in the United States will be an ever-growing problem,” said Oshima, of UC San Diego.

“The recent moratorium on exporting recycled plastic to China has had a profound impact on U.S. recycling industry and it has created an even greater need for viable alternative uses for our plastic waste. We believe this technology from MacRebur has the potential to address both of these critical challenges. In addition to using unwanted plastics that would have been destined for our landfills or our oceans, it also reduces fossil fuel usage and toxic off gassing during manufacturing to protect the environment.”

UC San Diego has a tradition of sustainability, with over three dozen buildings LEED-certified, a campus vehicle fleet that is among the greenest in the nation and one of the world’s most advanced micro-grids that generates approximately 85 percent of the electricity used on campus annually. Learn more at sustainability.ucsd.edu.